The Obamas day in London

'She is truly one of my favourite people,' Obama said of the Queen '... an astonishing person' 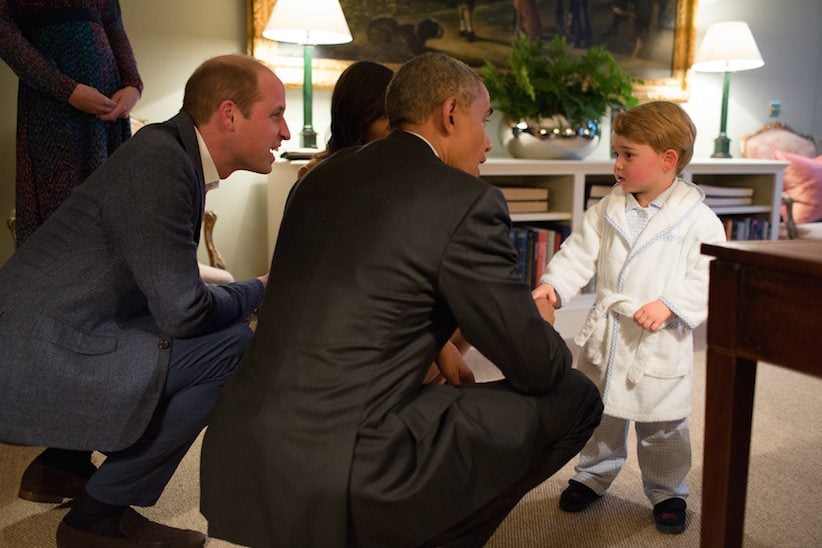 LONDON — President Barack Obama plunged into a whirlwind of royal socializing Friday that began over a birthday lunch with Queen Elizabeth II and ended at a dinner hosted by the trio of young royals who represent the future of the British monarchy.

Obama, accompanied by his wife, Michelle, arrived by helicopter on the verdant grounds of Windsor Castle, the sprawling, centuries-old royal residence and tourist lure located just west of London where the queen celebrated her 90th birthday a day earlier.

With a patterned scarf tied around her head in a light drizzle, the queen climbed from the dark blue Range Rover that her husband, Prince Philip, drove to the landing area for Britain’s oldest and longest-serving monarch to welcome her third U.S. president to the castle.

The couples shook hands before climbing into the vehicle — ladies in the back seat — for the short ride to the castle. Inside, the queen led the group into a sitting room warmed by a fire and asked the president where he wanted to sit.

“The queen’s been a source of inspiration for me,” Obama said later at a news conference alongside British Prime Minister David Cameron. “She is truly one of my favourite people … an astonishing person.” 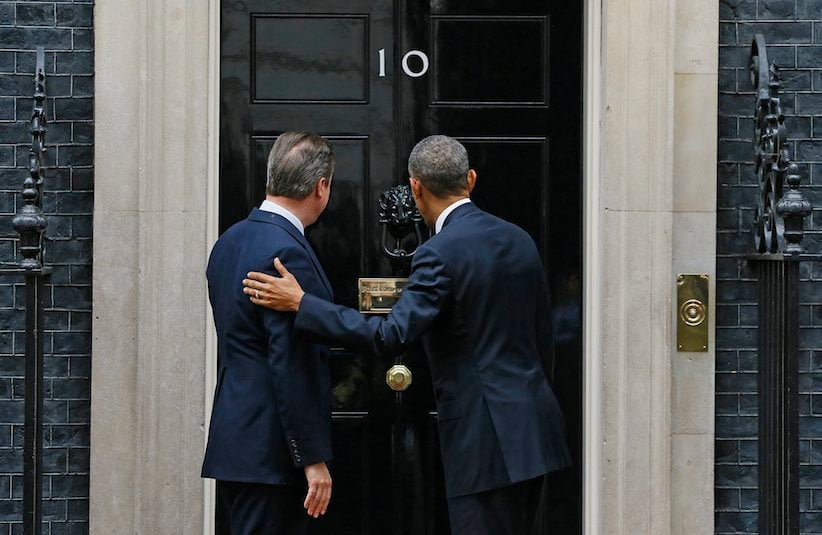 Obama capped the day with a trip to Kensington Palace, where he and the first lady were invited for dinner with Prince William, his wife, Kate, and his brother, Prince Harry. William is second in line to ascend to the throne after his father, Prince Charles.

Obama, wearing an open-collar shirt with his suit, held an umbrella for his wife, dressed in a camel-colored ensemble. They were greeted by William, Kate and Harry, and posed for photographs before stepping inside the royal residence. William and Kate’s nearly 3-year-old son, George, was spotted just inside the door.

Earlier at the Windsor Castle luncheon, the queen donned a periwinkle blue while Mrs. Obama wore an Oscar de la Renta print dress topped with a dark purple Narciso Rodriguez coat. The Obamas brought as a gift a photo diary of the queen’s many visits with U.S. presidents and first ladies.

The album opens with her 1951 visit when, as Princess Elizabeth, Duchess of Edinburgh, she toured George Washington’s estate at Mount Vernon in Virginia and met President Harry Truman at the White House. She has not visited Obama at the White House.

Obama broke up the royal holiday by stopping at 10 Downing Street for talks with Prime Minister David Cameron about the Islamic State group, Afghanistan, Syria, Libya, the global economy, Russia’s stance toward Ukraine, politics and other issues.

They also discussed Britain’s possible exit from the European Union, or Brexit, which Obama publicly argued against.

Cameron is leading the campaign to keep Britain in the 28-nation EU. At the news conference, Obama said solving world challenges “requires collective action” as he argued for why Britons should vote to stay in the alliance. He said membership amplifies British influence around the world.

Cameron is facing opposition from within his Conservative government and widespread skepticism among voters about the benefit of EU membership. Backers of those who support Britain’s exit have accused Obama of hypocrisy and meddling.

Obama said the eventual outcome a pending June 23 referendum would not change the “special relationship” that exists between the U.S. and the U.K. He cited the case of a top aide, deputy chief of staff Anita Decker Breckenridge, who has worked for him since before he was first elected.

Obama said his aide’s one request was to accompany him to Windsor, if he ever went, on the slight chance that she could get to see the queen. Obama said the queen graciously included Breckenridge in the group of people she greeted as they emerged from lunch. And, he said that Breckenridge, “who is as tough as they come, almost fainted.”

“That’s the special relationship,” he said. “We are so bound together that nothing’s going to impact the emotional and cultural affinities between our two countries. So I don’t come here in any way suggesting that that is impacted by a decision the people of the United Kingdom might make.”