Oil slump would have been disastrous for independent Scotland

The Scottish economy would be in serious trouble, had independence come to pass 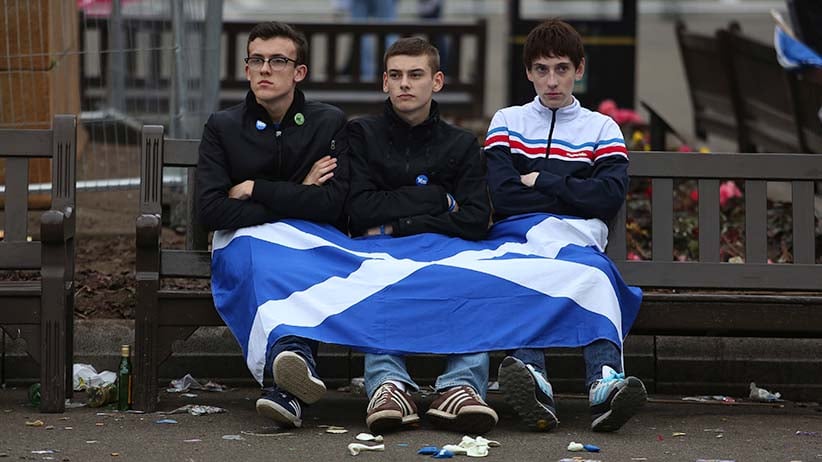 If Scotland had voted for independence a year and a half ago it would now be about to officially separate from the U.K., a transformation that Scottish nationalists sold to voters as an economic and cultural panacea. And remember, they very nearly won. But according to the latest figures from Government Expenditure and Revenue Scotland, had the windswept land of haggis and fine whiskey voted Yes in the September 2014 referendum it would now be teetering on the brink of economic disaster. Looking back, say critics, the SNP’s economic projections during the campaign were based on outdated data, erroneous projections and—most crucially—North Sea oil prices, which have plummeted.

According to the new report, oil revenues for Scotland’s share of the North Sea are only bringing in around $14 million a month in tax revenues (all figures in Canadian dollars), or roughly $42 million per quarter. In 2008, however, that same quarter brought in $8.6 billion in oil revenues.

As Prime Minister David Cameron put it last week in parliament after being challenged by a member of the Scottish National Party on tax devolution, “If we had had full fiscal devolution with oil revenues having collapsed . . . the right honourable gentleman and his party would be just weeks away from a financial calamity for Scotland.”

According to the independence plan set out by former SNP leader Alex Salmond during the referendum, Scotland’s official “independence day” was set to occur on March 24 this year. Westminster politicians who campaigned for the No side are understandably keen to point out what an economic calamity independence would have been in practice.

The financial goalposts have shifted significantly for Scotland since the nationalist movement first began. For instance, in 2014, Scottish GDP per person was six per cent higher than the U.K.—today, it’s one per cent lower. But the earlier figure was the one Alex Salmond used throughout the entirety of his referendum campaign, touting Scotland as having the potential to be the sixth-richest sovereign nation in the world. His economic plan at the time projected between $12 billion and $16 billion in oil revenues during the first year of independence. These promised revenues are key to the imagined future of an independent Scotland, since both Salmond and the new party leader Nicola Sturgeon pointed to the so-called “second oil boom” as the pot from which they would pay for their increased public spending.

Had the SNP’s wish for sovereignty come to pass they would now be facing down a deficit of crushing proportions. According to the new figures, total spending in Scotland last year stood at $130.2 billion, compared to tax revenues of $101.6 billion, a deficit of $28.6 billion. According to some analysts, this shortfall would have forced an independent SNP government to make spending cuts up to five times deeper than those imposed by the current Tory government in Westminster.

More distressing is that by any reasonable measure, the SNP must have seen this coming. Even before last year’s sharp decline in oil prices, reduced oil revenues from 2014-15 saw Scotland’s tax revenues fall from 8.6 per cent to 8.2 per cent of U.K. tax revenues, while Scotland’s public spending remained high at 9.3 per cent of the U.K.’s overall expenditure. So contrary to the SNP’s claims that oil-rich Scotland would be subsidizing the rest of the U.K. into the future, in fact the opposite has happened. According to the most recent figures, the average Scottish citizen costs $2,660 more per head each year in total public spending than the average Briton—and that’s held true for the past three years.

The debate over Scottish finances is expected to heat up this week as Chancellor of the Exchequer George Osborne unveils a budget that is expected to include significant Treasury spending cuts for Scotland. But the SNP’s Sturgeon remained unrepentant in the face of the devastating figures. Her position? It’s the British chicken and not the Scotch egg. “Arguments for greater fiscal and economic powers for Scotland are so that we have greater ability to change some of the underlying assumptions [on which the figures are based],” she told reporters.

Unionists are not buying it. Kezia Dugdale, the Scottish Labour leader, says the people of Scotland were nearly duped into disaster and it must not be allowed to happen again. “These figures from the SNP government show once and for all the devastating impact leaving the U.K. would have had on Scotland’s finances. People were misled by the SNP in the run-up to the referendum and that is unforgivable.”