St. Elijah's joins a growing list of more than 100 religious and historic sites looted and destroyed 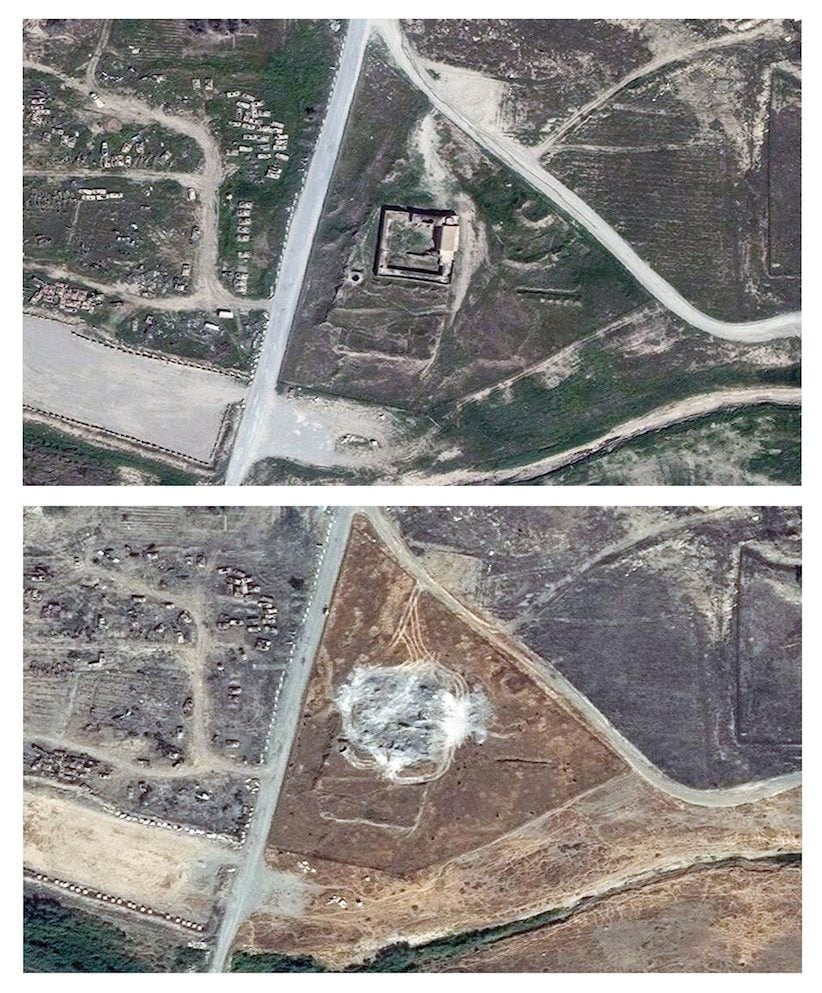 This combination of two satellite images provided by DigitalGlobe, taken March 31, 2011, top, and Sept. 28, 2014, shows the site of the 1,400-year-old Christian monastery known as St. Elijah’s, or Dair Mar Elia, on the outskirts of Mosul, Iraq. (DigitalGlobe via AP)

IRBIL, Iraq — Satellite photos obtained by The Associated Press confirm what church leaders and Middle East preservationists had feared: The oldest Christian monastery in Iraq has been reduced to a field of rubble, yet another victim of the Islamic State group’s relentless destruction of heritage sites it considers heretical.

St. Elijah’s Monastery stood as a place of worship for 1,400 years, including most recently for U.S. troops. In earlier millennia, generations of monks tucked candles in the niches, prayed in the chapel, worshipped at the altar. The Greek letters chi and rho, representing the first two letters of Christ’s name, were carved near the entrance.

This month, at the request of the AP, satellite imagery firm DigitalGlobe tasked a high resolution camera to grab photos of the site, and then pulled earlier images of the same spot.

Before it was razed, a partially restored, 27,000-square-foot stone and mortar building stood fortress-like on a hill above Mosul. Although the roof was largely missing, it had 26 distinctive rooms including a sanctuary and chapel. One month later photos show “that the stone walls have been literally pulverized,” said imagery analyst Stephen Wood, CEO of Allsource Analysis, who pinpointed the destruction between August and September 2014.

“Bulldozers, heavy equipment, sledgehammers, possibly explosives turned those stone walls into this field of grey-white dust. They destroyed it completely,” he said from his Colorado offices.

On the other side of the world, in his office in exile, in Irbil, Iraq, Catholic priest Rev. Paul Thabit Habib, 39, stared in disbelief at the before- and after- images.

“Our Christian history in Mosul is being barbarically levelled,” he said in Arabic. “We see it as an attempt to expel us from Iraq, eliminating and finishing our existence in this land.”

The Islamic State group, which now controls large parts of Iraq and Syria, has killed thousands of civilians in the past two years. Along the way, its fighters have destroyed whatever they consider contrary to their interpretation of Islam. 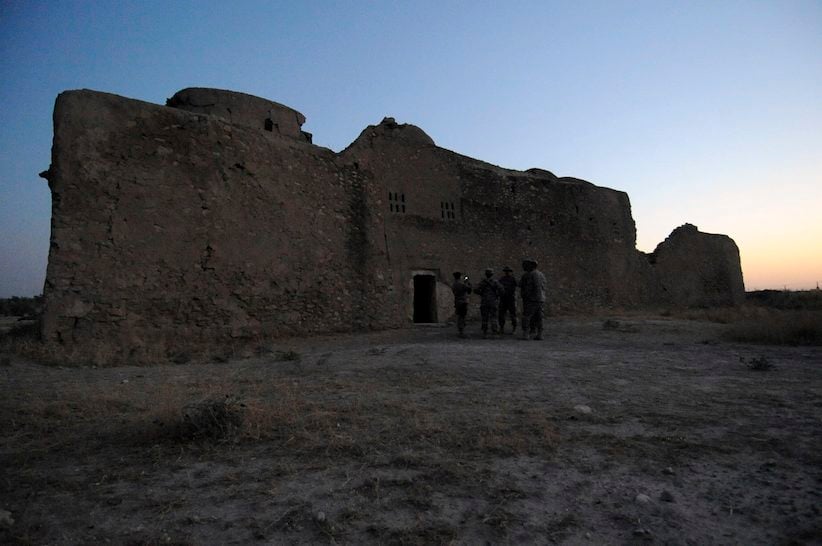 In this Aug. 21, 2009, photo released by the U.S. Army, visitors assigned to the Logistic Civil Augmentive Program from Forward Operating Base Speicher, near Tikrit, Iraq, stand at the entrance to the ruins of St. Elijah’s Monastery after completing a tour there. (MC1 (SCW) Carmichael Yepez/U.S. Army via AP)

St. Elijah’s joins a growing list of more than 100 religious and historic sites looted and destroyed, including mosques, tombs, shrines and churches. Ancient monuments in the cities of Nineveh, Palmyra and Hatra are in ruins. Museums and libraries have been pillaged, books burned, artwork crushed — or trafficked.

U.S. troops and advisers had worked to protect and honour the monastery, a hopeful endeavour in a violent place and time.

“I would imagine that many people are feeling like, ‘What were the last 10 years for if these guys can go in and destroy everything?”’ said U.S. Army reserve Col. Mary Prophit, who was deployed there in 2004 and again in 2009.

Built in 590, tragedy struck at St. Elijah’s in 1743, when as many as 150 monks who refused to convert to Islam were massacred by a Persian general. In 2003 St. Elijah’s shuddered again _ this time a wall was smashed by a tank turret blown off in battle. Iraqi troops had already moved in, dumping garbage in the cistern. The U.S. Army’s 101st Airborne Division took control, painting over ancient murals and scrawling their division’s “Screaming Eagle,” on the walls. Then a U.S. military chaplain, recognizing its significance, began a preservation initiative.

Roman Catholic Army chaplain Jeffrey Whorton, who celebrated Mass on the monastery’s altar, was grief-stricken at its loss.

“Why we treat each other like this is beyond me,” he said. “Elijah the prophet must be weeping.”

At the Vatican, spokesman Rev. Federico Lombardi, noted that since the monastery dates back to the time Christians were united, before the break with Orthodox and Catholics, the place would be a special one for many. He said it was the first news he had had of the destruction.

“Unfortunately, there is this systemic destruction of precious sites, not only cultural, but also religious and spiritual. It’s very sad and dramatic,” Lombardi told the AP.