The murder spree in N.Y. is the latest in a spate of violent mass shootings 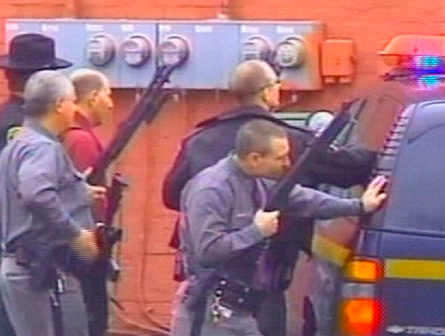 At about 10:30 AM on Friday, a man, described as being in his 20s, walked into the American Civic Association in Binghamton, N.Y., carrying a high-powered rifle. He reportedly took 41 hostages and began shooting some of his captives before turning the gun on himself. According to reports 14 people (including the shooter) are dead.

This is the latest mass shooting in recent months. Here’s a look back at some other recent tragedies:

Mar. 30, 2009: An armed man tore through the Pinelake Health and Rehab centre in North Carolina, leaving eight dead (seven nursing home residents and one nurse). The suspect, currently in custody, is a 45-year-old painter. Police believe he was after his estranged wife who works at the home.

March 21, 2009: Lovelle Mixon, a 26-year-old native of Oakland, Calif., killed four police officers and wounded another in a pair of shootings after being pulled over during a traffic stop. He was wanted for violating parole on a charge of assault with a deadly weapon, and began shooting at two officers, killing one before fleeing. When police forced themselves into an apartment where Mixon was hiding after the attack, he opened fire with an assault rifle, killing two of the three officers he hit. Mixon was killed by police.

March 11, 2009: Tim Kretschmer, a 17-year-old student, burst into his former school in the German town of Winnenden, killing 12 people and injuring several others. Nine of the victims were students (all but one was female). Three female teachers were also gunned down. Kretschmer then killed a passerby, and two other men at a car showroom before turning the gun on himself during a shoot-out with police. It was later revealed that the killer warned about the rampage on an Internet chat room.

March 10, 2009: In the worst shooting rampage in Alabama’s history, 28-year-old Michael McLendon shot and killed 10 people, including his mother, grandmother, uncle, two cousins and an 18-month-old girl, before shooting himself after a shootout and car chase with police. The killer had set his mother’s house on fire after killing the family dogs, and left a note behind which police say describes the ill feelings he had toward his family after a dispute over a bible.

December 25, 2008: Bruce Jeffrey Pardo, 45, dressed like Santa Claus during a family Christmas gathering opened fire at his in-laws house in Covina, Calif., killing nine people (including his estranged wife) before taking his own life later in his brother’s home.

September 23, 2008: Matti Juhani Saari, 22, a trainee chef at a college in Kauhajoki, Finland, killed 10 people with an automatic weapon at his school while wearing a ski mask. He then turned the gun on himself and later died from his injuries.

February 14, 2008: Steven Kazmierczak, 27, opened fire in a lecture hall at Northern Illinois University. The former student fatally shot five students (and wounded 18 others) before committing suicide. The shooter’s girlfriend later told reporters the gunman had called her the day before the rampage to say goodbye, but never told her about his plans.

December 5, 2007: Robert Hawkins, 19, walked into the Westroads Mall in Omaha and opened fire, killing eight shoppers before shooting himself. Five others were also wounded.

April 16, 2007: Cho Seung Hui, 23, shocked the world after fatally shooting 32 people in a dorm and classroom at Virginia Polytechnic Institute and State University (Virginia Tech) before killing himself. It is the deadliest mass shooting in modern U.S. history. Before the rampage, the gunman had mailed NBC a package of photos and a manifesto they then forwarded to police.

October 2, 2006: After barricading himself in a the West Nickel Mines Amish School in Pennsylvania, Charles Carl Roberts, 32, shot five girls to death, and injured another five, before killing himself. The milk-truck driver had sent the boys and adults out of the school after he had taken it over, and had bound the girls near the blackboard.