On Huawei, Trudeau fails to assert the Canadian values he touts

Terry Glavin: Canada has been repeatedly warned that the telecom giant poses a security threat. Yet when he talks about China, the PM is all wishy-washy platitudes 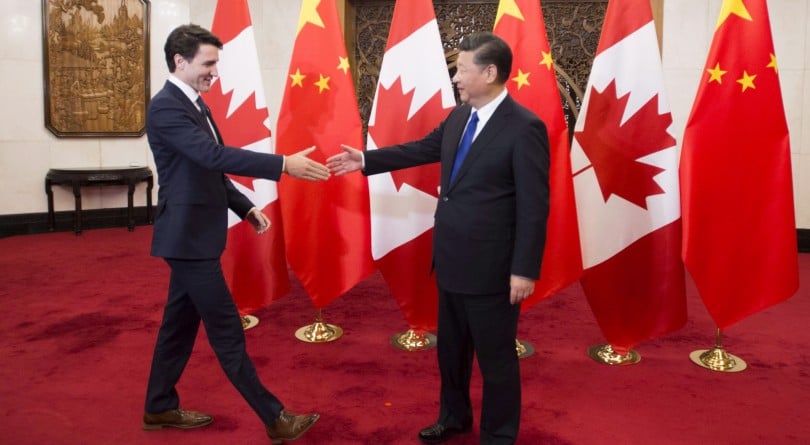 He still doesn’t get it.

Either that, or Prime Minister Justin Trudeau does get it, and he’s desperately afraid that the rest of us are going to figure it out. Either way, his evasions, elisions, dodges and deflections in response to the detention of Huawei chief financial officer Meng Wangzhou on a U.S. extradition warrant earlier this month betray his preference to cringe and cower rather than stand up to Xi Jinping’s increasingly bellicose police state in Beijing.

Decide for yourself which is worse, but in either case you would be a fool to believe a word Trudeau has been saying. And in all his public statements since President Xi blew a gasket about Meng’s arrest, setting off the nastiest upheaval in nearly half a century of Canada-China diplomacy, the most strenuous effort Trudeau has been making is to the purpose of not saying anything of substance at all.

During a rambling year-end interview with CTV’s Evan Solomon, broadcast on Sunday, Trudeau refused to provide a straight answer to any of these questions:

Were Canadian diplomat-on-leave Michael Kovrig and the eccentric Canadian social entrepreneur and freelance diplomat Michael Spavor arrested in China in retaliation for Meng’s detention? Have you asked for their release? Are you concerned that other Canadians may be in similar danger?

Do you consider Huawei a national security threat? Would you be concerned about Huawei playing a role in the development of Canada’s fifth-generation internet technologies? How do you promote free trade with a country that doesn’t respect the rule of law, like China? Do you think U.S. President Donald Trump has politicized the U.S. Justice Department’s request for Meng’s extradition, now that he’s suggested he might use the case as a bargaining chip in his trade talks with Xi?

Trudeau answered these questions with platitudes, pabulum, boilerplate diplo-babble and the now bog-standard and conveniently self-exculpating whinge that Canada is just suffering the travails of an innocent bystander in a trade-related battle of the titans pitting the beastly President Trump against the belligerent President Xi.

“Stepping back, one of the things that we have to understand is when there is a conflict like this, like there is between the United States and China, where we’re talking about an escalating trade war, we’re talking about significant clashes between the world’s two largest economies. There are going to be unintended consequences all around the world, including in Canada …

“What we need to do is make sure that we continue to stay standing up for Canadians, stay strong in our values, project those values around the world. And yes, stand up for Canadians as we are doing right now.”

For this self-flattering formulation to make sense, however, you would have to ignore quite a few embarrassing facts.

For one thing, the charges Meng faces—that she committed fraud against banks by concealing Huawei’s roaring trade with Iranian telecom firms via a dummy company, Skycomm—began with a U.S Justice Department criminal investigation that started long before Trump was elected. For another thing, the Justice Department’s concern was Huawei’s apparent violation of sanctions against Iran maintained not just by the U.S., but by the European Union and the United Nations.

Then there is the fact of dozens of prosecutions the U.S. Justice Department and the Treasury Department have brought against corporations based in the U.S. and Europe during the Obama administration, for violating sanctions intended to quarantine Iran, Sudan, Libya and other torture states.

Why should a Chinese telecom giant suddenly get a pass?

Short of war, economic sanctions are among the only levers available to democratic countries in the effort to uphold the “values” Trudeau persists in claiming as his own, the Liberal Party’s, and by extension, of course, Canada’s. Among these: due process, the rule of law, the sanctity of international covenants outlawing war crimes and crimes against humanity, and the primacy of human rights and equality before the law, enshrined in a variety of UN statutes and declarations.

So what to make of the Trudeau government’s persistent crowing about Canada projecting its “values” around the world?

Canada’s primary sanctions law is the Special Economic Measures Act. The number of successful public prosecutions under SEMA since 1992, when the law came into force: one. That was the 2014 case of Lee Specialties Limited, an Alberta firm fined $90,000 for shipping gadgets to Iran with dual uses in the petrochemical and nuclear industries. That’s it.

For years, Ottawa has happily taken advantage of the barriers the U.S. has put up against Huawei—the opaquely-structured behemoth is favoured by Beijing as a “national champion,” it is required by Chinese law to embed a Communist Party committee in its management structure, its founding president is a former People’s Liberation Army officer, and Meng Wanzhou is his daughter.

The federal government and the Ontario and B.C. governments have gone so far as to offer Huawei grants and tax inducements to set up shop in Canada. And now, after repeated in-camera warnings about the national-security implications of embracing Huawei, the directors of the “Five Eyes” intelligence-sharing alliance—Canada, the U.S., Australia, New Zealand and the United Kingdom—are taking the unusual step of going public with their alarm about the Trudeau government’s dangerously wishy-washy attitude. Their biggest worry is that Huawei will be permitted to join Canada’s fifth-generation internet network development—a liberty Australia, Japan, the European Union and the United States have already denied the company.

It is not as though Ottawa has been unaware of Huawei’s potential cyberespionage threat, or its shady dealings in Iran. Five years ago, Reuters was reporting that Skycomm—its company secretary was once Meng Wangzhou—was acting as a Huawei proxy. During Skycomm’s effort to sell Iran more than a billion dollars’ worth of Hewlett Packard gear, Skycomm’s proposals were marked “Huawei confidential,” its officers were handing out business cards with Huawei’s logo on them, and their email addresses were Huawei addresses.

All the while, we’ve been lazily allowing the U.S. to do the heavy lifting of sanctions enforcement on our behalf. “The U.S. is quite literally prosecuting possible Canadian cases in the absence of Canadian enforcement action,” University of Calgary professor Michael Nesbitt wrote in an extensive investigation published in the Ottawa Law Review last year.

Just last week, the U.S, Congress approved a sanctions-type bill to blacklist Chinese officials responsible for shutting diplomats and journalists out of Tibet. With all the frantic talk around Ottawa now about the supposed desirability of “de-escalation” with China, only an idiot would bet that Canada might take similar action.

RELATED: What China hopes to get by detaining Canadians

Earlier this month, Foreign Affairs Minister Chrystia Freeland announced that Canada would follow the lead of France and the United States and use the federal government’s recently-adopted Magnitsky law—named after Sergei Magnitsky, the whistleblower murdered in a Russian prison cell—to impose sanctions on 17 Saudis implicated in the murder of journalist Jamal Khashoggi at the Saudi consulate in Istanbul.

Human rights activists were hoping that Canada’s Magnitsky law could be used to sanction Chinese human rights shredders, targeting particularly the officials directly involved in rounding up perhaps a million Uighur Muslims in concentration camps in Xinjiang. With the Trudeau government now preoccupied with begging Beijing to stop punishing us for merely acting in good faith on a lawful U.S. extradition request in the Meng Wanzhou case, that seems exceedingly unlikely now.

Even U.S. Secretary of State Mike Pompeo didn’t hesitate to say last week that the arrests of Kovrig and Spavor were obviously retaliations, and that they should both be immediately released. But Trudeau couldn’t even bring himself to admit that much.

And Beijing is warning that worse may be yet to come.

This is what Canada has been reduced to. We grovel and whinge. We twist ourselves into contortions rather than say anything that might offend Beijing. We pretend we’re just innocents caught in the middle of a superpower pissing match, and we boast about “Canadian values” we’re too afraid to assert.