On the battlefield in Ukraine, the barricades remain

Michael Petrou on the gulf between revolutionaries and politicians 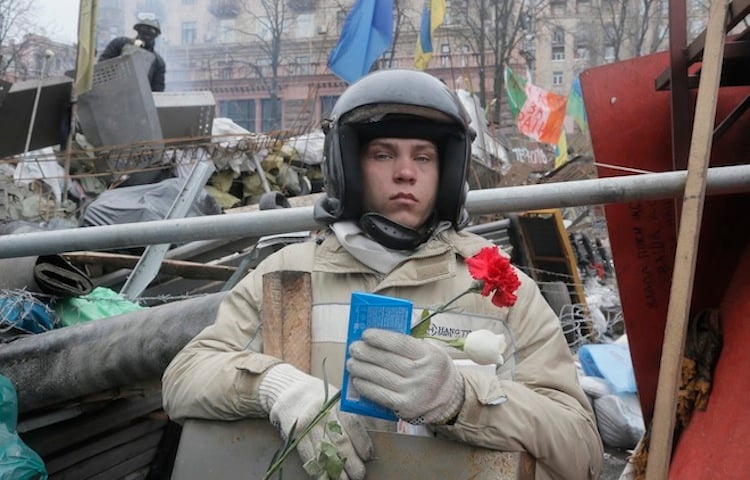 Armed with a chocolate bar and red carnation, a protester guards the barricades to Independence Square. (Efrem Lukatsky, AP Photo)

“Any time we feel we are in danger, if things are not going well with a new government, we must be ready to act, to protest,” Valory, a member of a self-defence band in Kyiv, said when asked why the barricades surrounding the city’s Independence Square remain, despite the revolution’s success in toppling President Viktor Yanukovych.

Similar distrust of Ukraine’s political class, even those among it who oppose Yanukovych, is widespread among many demonstrators still filling public spaces in the city centre. They feel that a deal opposition politicians struck with Yanukovych on Friday, which would have left him in power potentially until December, was a betrayal. And they fear that without the pressure they present by continuing their occupation of central Kyiv, similar betrayals might happen in the future.

This goes some way toward explaining why the infrastructure of the Maidan revolution—from volunteer kitchens, to barricades, to cached weapons—remains.

I explored this idea in two videos shot earlier today.

The first piece was shot on Khreshchatyk Street near the Maidan Square, where the barricades are being reinforced, not dismantled, despite the fleeing of Yanukovych and the naming of the country’s Parliament speaker to the presidential post on an interim basis.

In this second, a volunteer cook named Tatiana Romanova explains why she and the other protesters refuse to leave until the protesters’ political demands are met.