Canadians are on the front lines of Australia's 'mega-mega' wildfires

Mirrors melt on trucks, wind whips up from nowhere, fires create their own weather systems. Inside the firefighters' terrifying battle against the wildfires, and the Canadians helping along the way. 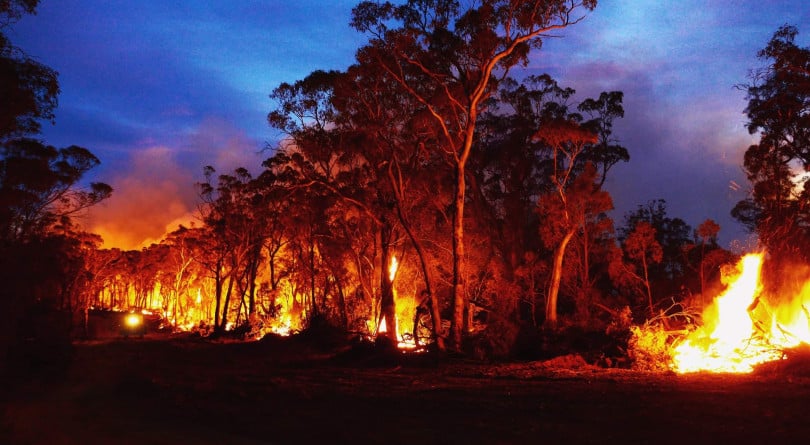 Mike MacGregor, Graham Trenholm and their firefighting team worked to protect the Jenolan Caves, the largest caves in Australia and a major tourist attraction. (Courtesy of Graham Trenholm)

Kenna Sadler figured Australia’s wildfires would reach the town of Ensay eventually. Nearby fires were raging out of control and fire behaviour analysts had predicted the flames’ trajectory, so the 25-year old wildland firefighter from Lethbridge, Alta., continued her patrol duty, driving up and down the roads near Ensay until she saw a glow in the distance.

Sadler and her Australian firefighter colleagues stopped to peer through the forest’s branches to spot the flames. “We’re squinting our eyes to see if that’s the fire,” Sadler remembers. “And six seconds later, the fire is right in our faces. I’ve never seen fire activity like this in Canada. It’s unreal.” 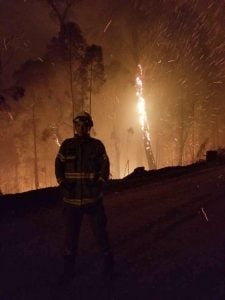 Her team was quickly forced to retreat to safety, but on the drive away from that flare-up Sadler learned another way Australian fires differ from Canadian ones: how people react to them.

Her escape route took her across one property, where Sadler saw some folks standing outside their home. She quickly told them the severity of the approaching flames and the urgency to leave the area. Only this family didn’t head for their vehicle; they were going to stay to defend their property.

“They didn’t have high-pressure nozzles or the volume of water we carry,” Sadler says. “They had a garden hose, the kind you’d get at Home Depot.”

Sadler and her crew explained they couldn’t offer protection if the fire came to their home—and to her surprise, the family seemed okay with that. Sadler struggled with what to do next, but she had to leave for her own safety. “It was the first time I had to leave a fire because it was too extreme for us—and I knew I was leaving people behind. It was insane to me,” she says. “The people in Australia like to stay and defend their land a lot more than people in Canada do.”

Australia’s bush fires have already claimed the lives of at least 25 people this season, killed hundreds of millions of animals, destroyed over 2,000 homes and burned more than 15 million acres of land. The country has called for help from countries such as Singapore, New Zealand, the United States and Canada for assistance.

And while Canada has sent almost 100 fire experts to help combat the wildfires in vital fire management roles ranging from logistics to air attack supervision, none of those Canadians are at Australia’s fire lines with a hose in hand, in part because Australia hasn’t asked. But ex-pat Canadians like Sadler were already on the front lines of the fire, working for various of Australian state-run services.

The fire has been dubbed a “mega-mega” fire because several mega-fires, the term often used for an out-of-control wildfire spanning more than 100,000 acres, were on course to merge in a national park north of Sydney.

Canadians Mike MacGregor, Graham Trenholm and their firefighting team with the Forestry Corp. of New South Wales—a state-run organization that manages 2 million hectares of forests—were on the ground in December alongside crews from the New South Wales Rural Fire Service as well as National Parks firefighters—with the monumental task of trying to protect the Jenolan Caves, the largest caves in Australia and a major tourist attraction. In Australia, unlike their previous work fighting wildfires in Ontario, Alberta and B.C., MacGregor and Trenholm didn’t have the luxury of a seemingly unlimited amount of water.

“If you’ve ever been in a helicopter above Ontario, there are lakes everywhere,” says MacGregor, who hails from Whitby, Ont. “You don’t have a problem getting water on a fire there.” But here in the state of New South Wales, MacGregor can’t remember an Aussie colleague ever even uttering the word “lake.”

Instead, their job on this day was to conduct a ‘back burn’: deliberately lighting fires inside a set perimeter, with the burning heading down the hill towards the main fire. If all goes according to plan, the set fires would burn up fuel between their containment line and the fire’s edge, in a controlled setting, so that when the mega-fire inevitably comes, it runs out of fuel as it approaches the containment line.

“There’s an inherent risk fighting fire with fire. It’s as dangerous as it sounds,” MacGregor says. “You think you have the weather with you, and suddenly you don’t.” 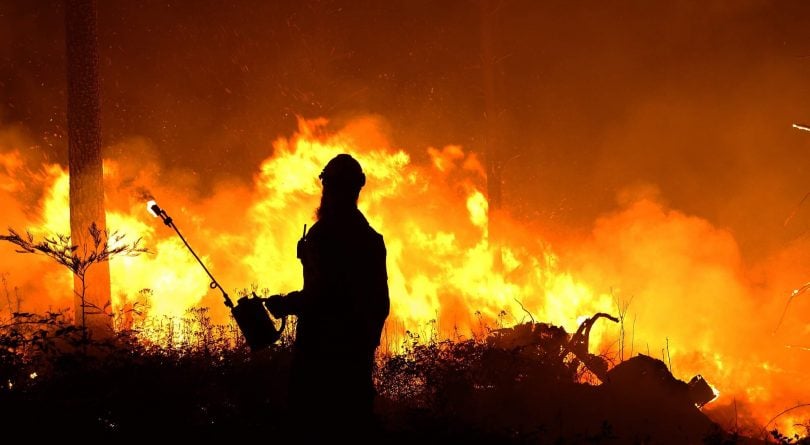 Mike MacGregor works 80 hours a week with torches or water or whatever tools are at his disposal to keep Tumut, New South Wales safe from the fires. (Graham Trenholm)

And in Australia, the weather has a way of not being on anyone’s side. In a moment, a non-windy day turns windy as gusts flow from a nearby gulley. The back burn lit up several large Eucalyptus trees, which launched hot embers. The wind carried those embers over the containment line, starting up several spot fires on the wrong side of the perimeter. MacGregor moved as fast as he could behind his truck to put one out with water. Trenholm was on the tanker trying to put out another spot fire when it became so hot, the plastic around the mirrors on their vehicle started to melt. 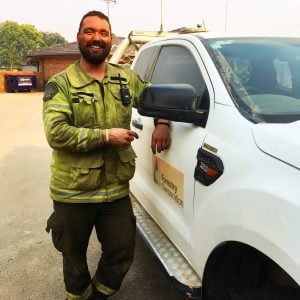 Trenholm radioed MacGregor that they had to get out of there. “I turned around and saw this 30-metre Eucalyptus tree is putting up 40-metre flames,” MacGregor says. Air tankers and helicopters were flown in with fire retardant and, after a 25-hour shift, Jenolan Caves held. But MacGregor figures they lost 10,000 hectares to the fire that day, adding, “I was the last person to put water on the spot that ended up burning all that area and costing millions of dollars.”

The Canadian duo are now back closer to their home base in Tumut, New South Wales, finishing up the six-month contract jobs they applied for to keep busy during Canada’s colder months when wildfire is less a concern at home. “Tumut town is still pretty safe, but I wouldn’t call it safe-safe. The fire is so close to town, it could jump this way,” says Trenholm, a volunteer fire captain in his hometown of Priddis, Alta. “The other day, a pyrocumulus happened, where the fire is generating its own thunderstorms.”

And every week, for 80 hours a week, the duo are out there with torches or water or whatever tools are at their disposal to keep the town, not to mention the pine trees that locals rely on for the many forestry industry jobs in town, safe from the fires.

Matt Wollman bought his ticket to Australia expecting to go backpacking. But when a firefighting job with Forestry Corp. came up a week before his departure date in November, the 22-year-old Manitoba Helitac crew member from Dauphin, Man., opted to apply. He was hired almost immediately and weeks later was fighting Australia’s most dangerous wildfire in history. 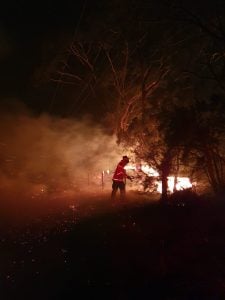 Matt Wollman contributes to the fight against the Morton Fire near Wingello, NSW. (Courtesy of Matt Wollman and Hayden Mclean)

But last weekend, when a spot fire burned out of control in the forest they were trying to protect, Wollman and his colleagues were pulled back to help protect the houses and people in the nearby town of Wingello. The town didn’t escape unscathed, and Wollman saw several locals standing and staring at their destroyed homes. Protecting every structure was virtually impossible.

“The fire here is a lot more erratic and the terrain makes it a challenge,” Wollman says. “It’s hard to fight a fire if it’s not safe to get within 300 metres of it. Back home, you’re usually in a position for a water bomber to smash it. Here, you have your vehicle as an escape. If you’re not in a vehicle, good luck outrunning it.”

At a time when hard-fought containment lines are being breached by lone embers flaring up too quickly for anyone to put out, it’s often difficult to find good news amid so much hardship and wasted effort.

But some days, firefighters feel a sense of accomplishment. For Kenna Sadler, who is stationed in Noojee, New South Wales, that day came amid 40C weather in nearby Tambo Crossing. Along with the Country Fire Authority, Sadler’s team was tasked with trying to save five rural properties and the assets in their area.

“You know when you open an oven and get that blast of heat,” she explains. “It’s like five times that, and it’s hard to breathe because it’s just so hot.”

After a 27-hour shift, Sadler remembers the fatigue, but also how the various teams had fast responses and strong communications between them. When Sadler returned for her next shift, her team got the morning briefing, which included a map of the fire in the region.

“In the middle of the map, there was this little gap in the centre of this massive fire—and that’s what we protected and halted that fire,” Sadler says. “To see that little circle on a map, we could say that was us. It felt good.” 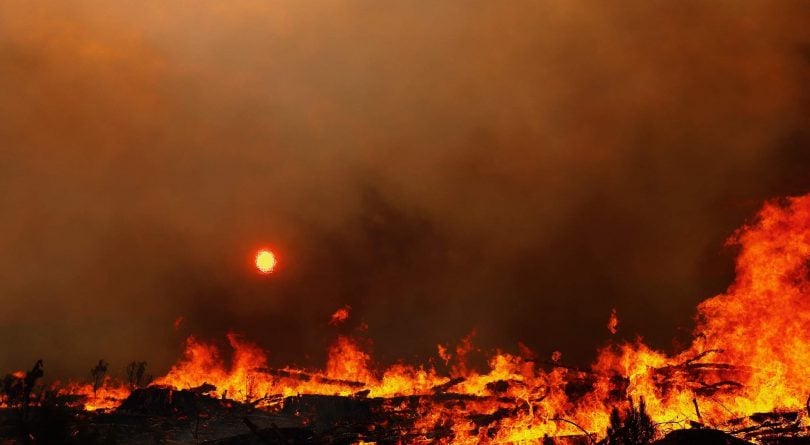 Mike MacGregor, Graham Trenholm and their firefighting team worked to protect the Jenolan Caves with ‘back burn’ fires. (Courtesy of Graham Trenholm)