One day in Donald Trump's lobby

Inside America’s Executive Mansion with the powerful, the protesters and one woman who's planning to move to Montreal 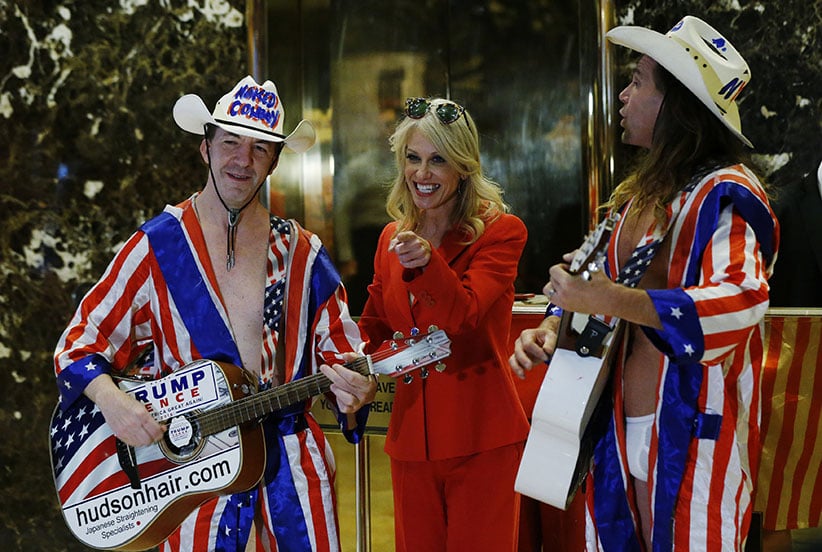 The vertical White House was filling with voyeurs just as the sun came up. At a golden balustrade overlooking a gilded escalator lit by the shining ornaments of a phony Christmas tree, a woman named Dorene Lawhorn from the solid-red south posed for a photograph.

“What do you have to say about the election of Donald Trump?” she was asked. This was Monday morning in the lobby of Trump Tower at the corner of Fifth Avenue and 56th Street in New York, New York, with barely half-a-hundred dawns remaining until Inauguration Day, down in pipsqueak Washington, D.C. Until then, this is America’s Executive Mansion; and maybe even after then, should the White House prove too plain.

“I say hallelujah!” Lawhorn cried. “I say thank you, Jesus!”

“How’s that for an answer?” she winked.

Lawhorn had come up to Manhattan–for the first time in her life—from Swanee, Georgia, to listen to her cousin sing Handel’s Messiah at Carnegie Hall and to immerse herself in the auric glow of her beloved president-elect.

“I would love to decorate his Christmas tree,” she said, looking down at the ersatz puce spruce, and she ascribed Trump’s victory to the fact that, as she put it, “the man resonated with the majority of the people of the United States.”

“Dorene,” she was reminded, “he lost to Hillary Clinton by more than two million votes!”

“That’s why we have the Electorial (sic) College,” the Georgian countered. “And besides, I think a lot of people voted for her more than once.”

Somewhere, high above the mortal Earth, Trump stirred to wakefulness. Inspired by all the Dorenes of his nation, the president-elect became the first candidate in history to demand a recount of an election he didn’t lose.

“In addition to winning the Electoral College in a landslide,” Trump tweeted, “I won the popular vote if you deduct the millions of people who voted illegally.”

Down in the basement, Fred Trump, the tycoon’s father, gazed at us from a framed oil portrait above the bar of the Trump Tower Grille, with its superfluous final ‘E,’ and his smile said, ‘That’s my boy.’”

On the menu at the Grille was the “Ivanka Salad” (greens, feta, Greek dressing) and the “You’re Fired!” Cocktail (an oversized Bloody Mary), and an US$18 taco bowl much like the one that Fred’s second son—the most famous antagonist of the Mexican people since Hernán Cortés—posed with on Twitter last Cinco de Mayo with the caption “I love Hispanics!”

Clots of white men in black suits with shaved heads and ear buds coagulated in the lobby. Twenty-five reporters and cameramen lolled cynically, impounded by a border wall of red velvet rope. An employee named Fernando was washing the display cases and burnishing the banisters of Trump Tower—in a tuxedo, no less.

“Whatever you do,” Fernando said, echoing his master’s creed, “Do it with class.”

At 9:39 a.m., two German shepherd dogs were brought in by the Secret Service to aid in bomb detection.

At 10:27 a.m., vice president-elect Mike Pence arrived at Trump Tower and headed for the gilded elevators.

“It’s going to be a busy week,” said the Indiana governor, pivoting for an instant to the famished press. “Get ready. Buckle up.”

The president-elect’s daybook was said to be replete with vital meetings. Yet to be appointed were a Secretary of State, a Secretary of Commerce, a Secretary of Labor and a Secretary of Agriculture; also Treasury, Interior, Health and Human Services, Veterans Affairs and Environmental Protection, should Trump choose to have an affair with a veteran or protect the environment at all.

Every 30 minutes, someone important was whisked off the Fifth Avenue sidewalk: a man named Paul Atkins, the former commissioner of the Securities and Exchange Commission; a woman named Kathleen Hartnett White of the Texas Public Policy Foundation.

“How are the meetings going?” reporters hollered at Kellyanne Conway, the Trump transition’s mouthpiece and fly-in-the-ointment, when she bolted from the elevator at 1:58 p.m.

“Excellent!” Conway chirped, then disappeared toward the Trump Tower Bar.

At 2:08 p.m., General David Petraeus sidled through the cordon of cops.

Next to the media stockyards, a bearded young man was holding a book to his chin and reading from it aloud. The man’s name was Jeffrey Bergman. The book was Night by Elie Wiesel, a memoir of Auschwitz and Buchenwald.

“Those who kept silent yesterday will remain silent tomorrow,” Bergman quoted, though no one, scurrying through this pastiche palace of vanity, paused to hear the words.

With Bergman was an older woman from Connecticut named Anne Teall who had brought her own material to read to the marble walls: works by Dr. Martin Luther King, Jr.; Mahatma Gandhi; Maya Angelou’s Human Family.

“I could be outside with a sign that said ‘F–k Trump,” Bergman explained. “Instead, I’m inside with a book.”

“Do you hate Donald Trump?” Teall was asked.

“I despise him,” she replied. “I don’t trust him. I don’t like his disinterest in the truth.”

It was suggested that Mahatma Gandhi would not have used the word ‘despise.’

“It takes a lot to make me hate,” Teall said. And then she announced that she and her husband were going to move to Canada.

“I feel that I need to have a refuge,” she explained. “I’m part Jewish, and I fear that he cannot keep the promises he made to his people, and that there will be a backlash. I don’t know who the scapegoats will be. It could be the blacks. It could be us.”

Her sanctuary, she said, will be Montreal. Her husband, a retired professor of finance, surely will be able to secure a visa, she avowed. “We were just there,” Teall reported. “We opened a bank account, we have a realtor, and we are looking for two bedrooms and two baths somewhere downtown.”

“Can you speak French?” the self-exile was asked amid the grandeur of Trump Tower on Fifth Avenue in New York, N.Y.

“Oon puh,” she smiled. “And after visiting Montreal, now I know what poutine is! I won’t eat it. But I know what it is.”