One day in Washington, two nations

While James Comey testified, Donald Trump preached. In both places talk turned to lies, obstruction and the fight ahead. 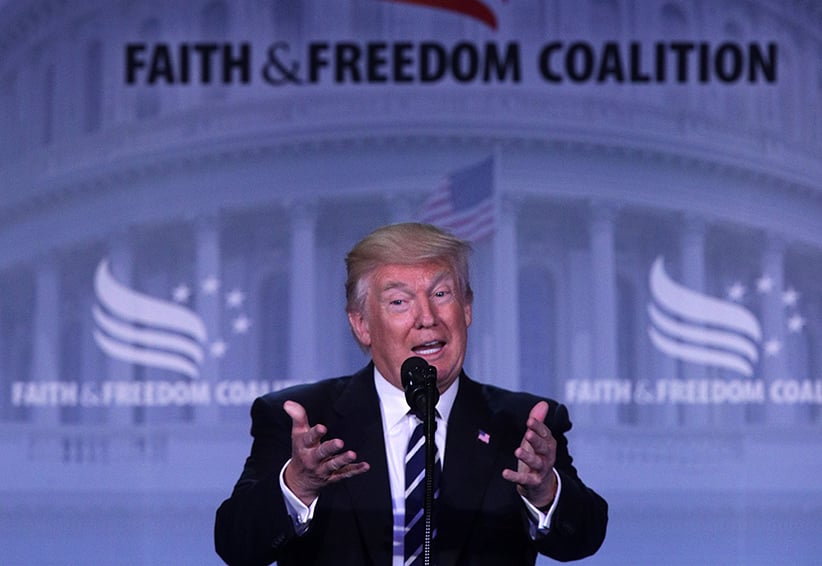 In Washington, this fine June 8th, brilliant and warm, yet one day in two nations.

Noon in the ballroom of a grand hotel once favoured by Roosevelt, Reagan, Bush. A habited Dominican Sister of Mary at the lectern in the spotlights, beseeching God: “Help us to live and speak the truth.”

As Donald Trump would say, “I wish Him luck.”

A thousand or more in the audience, dusting off their coffee and pie. Round tables, white eaters, brown waiters. The annual Faith and Freedom conference of politically active Christians.

After the nun and the anthem and the Pledge of Allegiance and the introduction—“We love him because he is our friend … the equivalent of a political earthquake and we’re still feeling the tremors”—dwarfed on the huge stage, cocky and beaming, colloquial and charming, quoting Scripture, pledging humble service to the forgotten, and drawing a whooping, standing ovation when he boasts of withdrawing from the Paris Climate Accord: the President.

Even the Latin and African immigrant servers pause to cheer.

Eighty-one per cent of evangelicals voted for him, it is announced. “Who are the 19 per cent?” Trump jibes.

He had spoken here three times before as a butt-of-jokes businessman and once, last year, as a long-shot candidate—and now he is here as president, his administration nearly five months into an act of assisted political suicide.

But to these people, after eight years of apostasy and error, the world has been turned right-side-up.

“You didn’t let me down and I will never, ever let you down,” says Trump. (“I am an evangelical, I’m a Christian, I am a Presbyterian,” he had said before the Iowa caucuses.)

“As a believe-it-or-not politician… I never ever would have said that… but I’m president, I guess I’m a politician…” he goes on.

He is oblique and he is oblivious, perhaps at counsel’s insistence—“We’re under siege, you all understand that, but we will come out bigger, better, and stronger, you watch.” There is no mention of the Russian Federation, of obstruction of justice, of the FBI, of the six-foot-eight meddlesome priest of which he has rid himself, of the looming shadow of impeachment, of dinners á deux at the White House, of the tempest outside the hall.

He quotes Isaiah 1:17 from the teleprompter:

Learn to do right; seek justice
Defend the oppressed.
Take up the cause of the fatherless;
Plead the case of the widow.

“The Democrats are obstructionists. It would be great to get along with them but it’s impossible. They are obstructionists,” he says. “They will lie, they will obstruct, they will spread their hatred and their prejudice but we will not back down from doing what is right as the Bible tells us. Nothing worth doing ever came easy, but we know how to fight better than anybody, we are winners and we are going to win and fight for an unbelievable future.”

Remember these keywords for the trials to come: Lie. Obstruction. Fight.

“The level of hatred is beyond anything that I’ve ever seen,” says Trump. “You picked a winner,” he brags to his reverent nation.

Two hours earlier, the Capitol thronged, young hundreds dressed as if for church, lined up in the hallways, parsing nouns like “cloud” and “collusion” and pregnant little verbs like “ask” and “hope.”

James Comey—the Friendly Giant to The Donald’s Mister Dressup—strides over the drawbridge, through the big doors, and sits down in the little chair.

He is an unemployed Colossus with a cross to bear, a grudge to settle—maybe more than one grudge—and a story to tell, much of it already spilled, some of it by his own clandestine act of leakage to an academic friend.

Leading the questioning is the wealthiest man in the United States Senate—Democrat Mark Warner, vintner of Virginia—and Republican Richard Burr of North Carolina, the son of a preacher man and a distant descendant of the duelist who killed Alexander Hamilton in the year 1804.

“This is not a witch hunt,” Warner says. “This is not ‘fake news.’ This is an attempt to protect our country from a new threat that will not go away any time soon.”

Does he mean that the threat is the Russians, or is it Donald Trump?

Nearly everything important is said in the first 10 minutes. (Though this will go on for years.)

“Do you have any doubt that Russia attempted to interfere in the 2016 elections?” asks Burr.

“Do you have any doubt the Russian government was behind the cyber-intrusion in the state voter files?”

“Are you confident that no votes cast in the 2016 presidential election were altered?”

“I’m confident. When I left as director I had seen no indication of that whatsoever.”

“Director Comey, did the president at any time ask you to stop the FBI investigation into Russian involvement in the 2016 U.S. Elections?”

“Not to my understanding, no.”

Senator Burr wonders if there might be a criminal act that has yet to be revealed.

“Correct,” civilian Comey responds. “In any complex investigation, when you start turning over rocks, sometimes you find things that are unrelated to the primary investigation that are criminal in nature.”

The meat of Comey’s testimony is this: Trump’s “shifting explanations confused me and increasingly disturbed me.”

“He had repeatedly told me, ‘You’re doing a great job.’ ” Then, “I saw on television the president saying he actually fired me because of the Russia investigation” and “the administration then chose to defame me.

“Those were lies, plain and simple.”

Why did he exit Trump Tower, the White House, hang up the phone, and commit his thoughts to writing?

“I was honestly concerned he might lie about the nature of our meeting. It led me to believe that I gotta write it down, and I gotta write it down in a detailed way … I knew that there might come a day where I might need a record of what happened, not just to defend myself and the FBI and the integrity of our situation, and the independence of our function.”

“You don’t know of anyone that’s ever been charged for hoping something?” asks Sen. Risch of Idaho.

“Lordy, I hope there are tapes,” says Comey, in his one eternal line for Bartlett’s Quotations.

“Why did he fire you?” asks Dianne Feinstein of California.

“I don’t know for sure,” replies Comey. “I take the President at his word that I was fired because of the Russia investigation.”

So he is afraid of Trump’s lies, but he takes him at his word.

Back to the grand hotel.

The attorney general of Texas is lauding Trump as “a president who follows the law and doesn’t make up the law.”

Ted Cruz —Lyin’ Ted!—struts and frets upon the stage and crows, “it is June of 2017 and Hillary Clinton is not President of the United States! And Neil Gorsuch is a Supreme Court justice! Which demonstrates that elections matter, and when we rise up and stand together, we can do remarkable things.”

“This is a strange time in Washington,” says Cruz. “There is a lot of noise, a lot of people lighting their hair on fire on cable television every day. Ignore the political circus and let’s focus on delivering results.”

The Texan invokes the real-world cares of “the plumbers, the teachers, the farmers.” Washington hears this and thinks of the Watergate plumbers, scandal, hearings, more leaks, trials.

In the ballroom, a woman named Emma Meshell from Portland, Oregon.

“Whom do you believe?” she is asked.

“I put the truth somewhere between what Comey says and what Trump says,” Meshell answers. She is interning at an organization called Americans For Prosperity. “What Trump said and what Comey took it to mean are probably two different things,” says the intern.

The Hartmans of Sacramento, California, are here: Stephen and Givana, she a former newspaperwoman, he a veteran police and corrections officer, 38 years in uniform.

“Whom do you believe?” they are asked.

“I would believe Trump,” the husband replies. “I think Trump is just a straight shooter. He’s not perfect—no one is—but I think he tells it like it is.”

The Hartmans were for Ben Carson at first, before Trump swept through the Republican field like the plagues of Exodus.

“I think God has given the country a little bit of a respite,” Stephen says.

“That’s what God did. Am I God? Do I know what is in that man’s heart? No. But as law enforcement, I get a pretty good view of what’s inside a person.”

“As it says in the Bible, God will raise you up, and God will set you down,” says Stephen.

“I believe that Donald Trump is God’s choice,” Givana smiles. “He has character. He’s a go-getter.”

“Of course, God works in His own way. For some reason, He allowed Obama.”