Young vs. old in Brexit: Who betrayed whom? What one photo says about the dispiriting cycle of modern politics 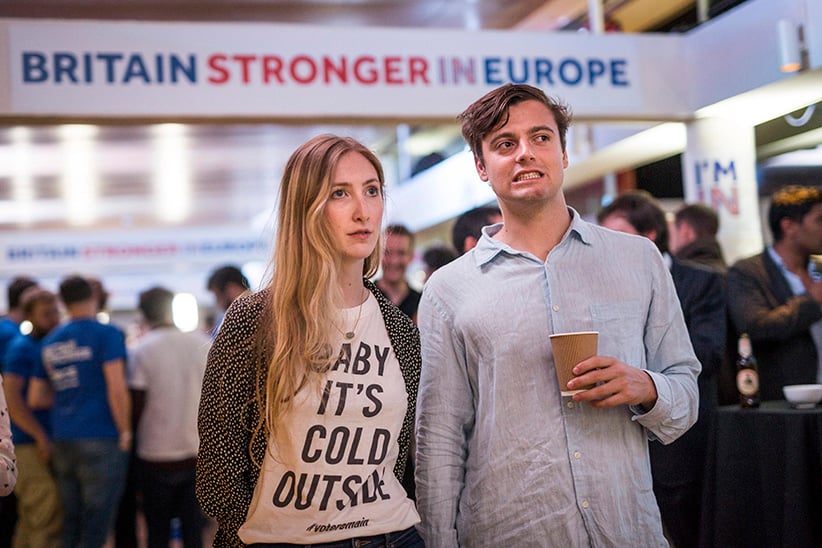 England, George Orwell wrote, resembles a family. “It is a family in which the young are generally thwarted and most of the power is in the hands of irresponsible uncles and bedridden aunts,” Orwell said. “A family with the wrong members in control—that, perhaps, is as near as one can come to describing England in a phrase.”

Orwell wrote that in 1941, just as England and the United Kingdom of which it is a part was two years into the second pan-European war in a quarter-century. Regarding these words through hindsight, coloured by both Orwell’s later works and the rise and fall of socialism over the rest of the century, lent them to classist interpretations. Now, in light of Thursday’s referendum on the U.K.’s membership in the European Union, in which a small majority opted for the nation to leave it, it’s the line about thwarted youth that stands out.

In the aftermath of the result announcement, young Britons—those of millennial and post-millennial generations who largely consider themselves global citizens—were dismayed their elders had betrayed them. A chart circulated quickly and widely on social media showing the vote breakdown, accompanied by a rough calculation of how many years each age group would have to live with the decision. Obviously, the youngsters will face the consequences of a Brexit for much longer.

And what do they think those consequences might be? Again, social media had an answer. “The younger generation has lost the right to live and work in 27 other countries,” Nicholas Barrett wrote in a comment on the Financial Times that went viral. “We will never know the full extent of the lost opportunities, friendships, marriages and experiences we will be denied. Freedom of movement was taken away by our parents, uncles and grandparents in a parting blow to a generation that is already drowning in the debts of our predecessors.”

Perhaps these two in the photo above sensed that looming despair on Thursday night. We know a bit about them: they are young and, by all appearances, supported Remain. We might also with some accuracy interpret their reactions to the incoming results as disbelief and discomfort, respectively. But we do not know their names. And we do not know if they actually voted.

MORE: On the Leave vote, Scott Gilmore says we should Brexit and chill

Sky News circulated numbers on Saturday that suggested voter turnout among the youngest demographic was as low as 36 per cent, and that only 58 per cent of the 25 to 34 year-olds showed up to vote. Those numbers are, at best, a guess—they are not based on actual recorded data, but rather projections based on a “9+/10 certainty to vote, usually/always votes, voted/ineligible at GE2015.” The real turnout breakdown by age will never be known because nobody actually recorded it as they do during a general election. Nevertheless, overall turnout in areas where young people mostly live (i.e. London) was lower than where they mostly don’t. As someone commented on the Sky data: “and that, folks, is why the old didn’t betray the young—they betrayed themselves.”

Who betrayed whom? It is a dispiritingly recurring question following most mass democratic decisions, and it is often one that places old and young on opposing sides, given the broadly accepted Catch-22 of modern politics: that it’s useless to appeal to the young because they don’t vote, thus creating nothing to appeal the young to vote. And the nature of post-election polling, broken down into age divisions, perpetuates it. We are conditioned to believe that democracy is not a gift to be shared from one generation to another, but a fight for control where it is every demographic for itself.

MORE: What does Brexit reveal about a global generational divide?

Maybe it is the transactional, consumerist nature of modern political campaigns (“I will give you my vote in exchange for something I believe I need to make my life better immediately”) that they are often nostalgic—“a settling of grievances between the present and the past,” to borrow from Don DeLillo. There is no question that this referendum campaign was exactly that. One side arguing that Britain was once great; the other arguing that it is pretty good at the moment.

Maybe this constant nostalgic conflict is why we generally pay only rhetorical homage in campaigns to bestowing things to our children and grandchildren. For to accept the reality of what we are leaving behind would require a very intense and complicated conversation about the future. It would also require an honest reckoning of—not just excuses for—our current and past actions. The truth is that we have stopped believing that is what politics is about. It was perhaps naive of many young Britons to believe that not everyone had forgotten that it is also what families are about.

FILED UNDER: Brexit Editor's Picks One photo less than 1000 words