'Saying he pledges to the Islamic State,' a dispatcher wrote at 2:40 a.m.

ORLANDO, Fla. — Police dispatchers heard repeated gunfire, screaming and moaning from patrons of the Pulse nightclub who called to report that gunman Omar Mateen was opening fire inside the club, according to written logs released Tuesday.

The first call of “shots fired” came in at 2:02 a.m. and the caller reported “multiple people down.”

One caller said Mateen had gone upstairs where six people were hiding. Dispatchers heard up to 30 gunshots in the background at another point as callers screamed and moaned.

“My caller is no longer responding, just an open line with moaning,” one dispatcher said in the report.

A caller described Mateen as wearing a grey shirt and brown pants.

Mateen opened fire at the club on June 12, leaving 49 patrons dead and 53 injured in the worst mass shooting in recent U.S. history. In calls with the police after the shooting began, Mateen pledged his allegiance to Abu Bakr al-Baghdadi, the leader of the Islamic State group, declared himself to be an Islamic soldier and demanded that the United States stop bombing Syria and Iraq, the FBI said.

“Saying he pledges to the Islamic State,” a dispatcher wrote at 2:40 a.m.

The report recounted where patrons hid in the nightclub: in an office upstairs, in a closet, in a dressing room and behind a stage. Ten people were hiding in the handicap stall of a bathroom. One caller described patrons using their hands to stop the bleeding of shooting victims. 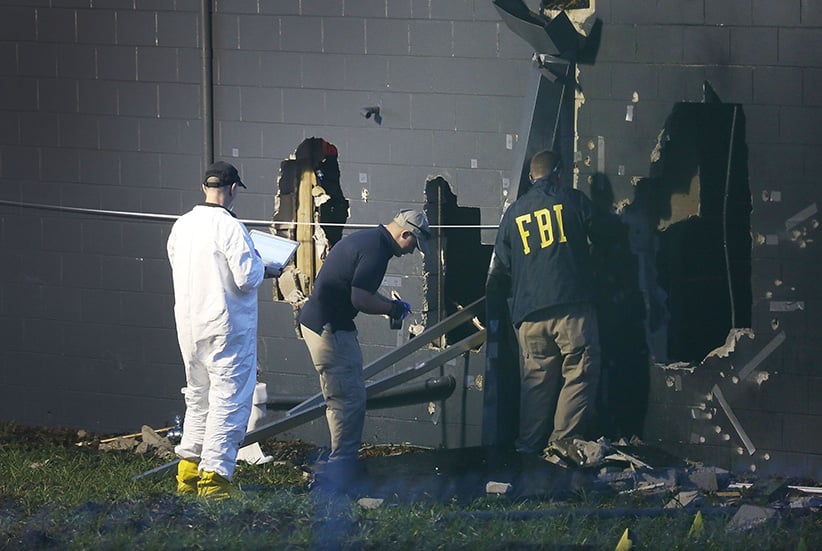 At several points, callers relayed misinformation to the dispatchers. One caller said there was a second gunman and another thought Mateen had a bomb.

Mateen “is saying he is a terrorist … and has several bombs strapped to him in the downstairs female restroom,” the dispatcher notes said.

Related: Why Orlando is a watershed moment

Emails, inspection reports and texts released by the Orlando Fire Department on Tuesday suggested that one of the exits at the Pulse nightclub wasn’t operable weeks before the massacre, but a fire department spokeswoman and an attorney for the club both said that wasn’t true.

The last fire inspection at Pulse was conducted in late May when the inoperable exit door was discovered, according to an email exchange between Orlando Fire Marshall Tammy Hughes and Fire Chief Roderick Williams. A follow-up visit was planned but hadn’t been assigned so it wasn’t known if the problem was fixed, the emails said.

But Pulse attorney Gus Benitez said Tuesday that none of the six exits at the gay nightclub was blocked during the inspection. The inspector only found that a light bulb in an exit sign needed to be replaced and a fire extinguisher needed to be hung on wall. Both items were corrected, Benitez said in a statement.

Fire department spokeswoman Ashley Papagni backed up Benitez’s contention on Tuesday. She said the exit door was deemed inoperable because of the light bulb problem in the exit sign.

Pulse had twice the number of exits needed to accommodate its maximum occupancy of 300 patrons, according to the emails and texts.

The emails and dispatcher notes were released on the same day that a legal tug-of-war broke out over which court should be the venue for determining whether 911 tapes from the Pulse nightclub shootings can be made public.

Nearly two dozen news media organizations — including The Associated Press, CNN and The New York Times —contend city officials are wrongly withholding recordings of 911 calls and communications between gunman Mateen and the Orlando Police Department. Mateen was killed by police after a standoff in the shooting at the Pulse nightclub.

City officials claim the recordings are exempt under Florida law and are part of an FBI investigation.

A hearing had been scheduled Tuesday in a Florida courtroom in Orlando but it was abruptly cancelled after the U.S. Department of Justice was added to the case and Justice officials asked for it to be transferred to federal court.

Attorneys for the news media organizations said they will fight to keep the case in state court.