A formal verdict in the case that has riveted much of the world is expected Friday. 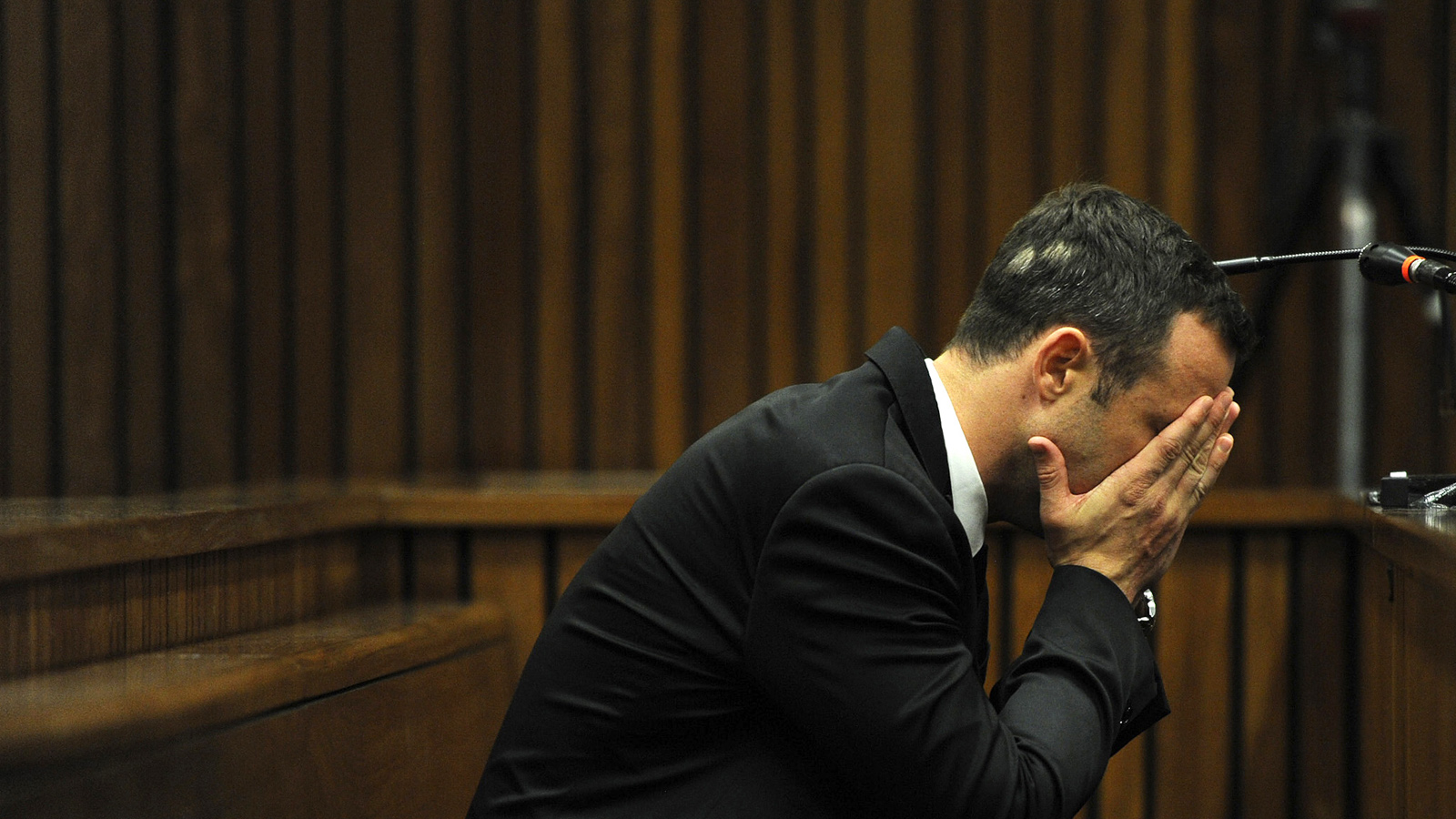 Olympic and Paralympic track star Oscar Pistorius reacts during the fourth day of his trial for the murder of his girlfriend Reeva Steenkamp.

PRETORIA, South Africa — The judge in Oscar Pistorius’ trial said Thursday he can’t be found guilty of murder but that he was negligent in the killing of girlfriend Reeva Steenkamp, raising the possibility that the double-amputee Olympian will be convicted of culpable homicide.

Judge Thokozile Masipa said she felt Pistorius acted negligently when he fatally shot Steenkamp. She then stopped delivering her judgment and adjourned until Friday when a formal verdict in the case that has riveted much of South Africa and the world is expected.

While the judge did not announce any formal verdicts she indicated Pistorius would not be convicted on premeditated murder or a lesser murder charge, but that may be vulnerable to being convicted of culpable homicide, or in other words a negligent killing.

That normally carries a five-year jail sentence in South Africa, but it can be changed by a judge depending on the specific circumstances of the killing.

If Pistorius is formally acquitted of murder, he could still be sent to jail for years if it’s found he acted negligently in Steenkamp’s death. Pistorius has admitted firing the four shots that killed Steenkamp on Valentine’s Day last year.

Pistorius says he mistook his girlfriend, a model and budding reality TV star, for an intruder and killed her accidentally. The prosecution alleges the athlete intentionally killed her after a loud argument, which was heard by neighbours.

Masipa was explaining her reasoning behind the upcoming verdicts in the case against Pistorius. Masipa said there were “just not enough facts” to support the finding of premeditated murder in Steenkamp’s fatal shooting.

As the judge spoke, Pistorius wept quietly, his shoulders shaking as he sat on a wooden bench.

Masipa earlier told Pistorius he could remain seated on a wooden bench while she read her verdict out and until she asked him to stand. She then proceeded to explain her assessment of the testimonies of some of the 37 witnesses who testified. The process

Casting doubt on witness accounts of hearing a woman’s screams, Masipa said “none of the witnesses had ever heard the accused cry or scream, let alone when he was anxious,” apparently acknowledging the possibility that the defence argument that Pistorius had been screaming in a high-pitched voice after discovering he had fatally shot Steenkamp.

At one point, Masipa said: “I continue to explain why most witnesses got their facts wrong.”

Masipa also said she was disregarding text messages between Steenkamp and Pistorius that had been entered as evidence. Prosecutors had submitted text messages that showed tension between them while the defence submitted messages that indicated mutual affection. That evidence, the judge said, doesn’t prove anything.

“Normal relationships are dynamic and unpredictable most of the time, while human beings are fickle,” she said.

Pistorius faced 25 years to life in prison if convicted of premeditated murder for fatally shooting Steenkamp in his home in the pre-dawn hours of Feb. 14, 2013. He also faces years in jail if found guilty of murder without pre-planning, or of negligent killing. Pistorius could also be acquitted if Masipa believes he made a tragic error.

Pistorius has said he mistakenly shot Steenkamp through the closed door of a toilet cubicle, thinking there was an intruder in his home and pleaded not guilty to murder.

A key part of the prosecution’s case was its assertion that Steenkamp screamed during a late-night alleged fight with Pistorius before he killed her. But Masipa said some of those witnesses who testified to hearing a woman scream in the pre-dawn hours of Feb. 14, 2013 were “genuinely mistaken in what they heard, as the chronology will show.”

That appeared to indicate that the defence had succeeded in raising doubts that Steenkamp ever screamed. The defence says the screaming was instead Pistorius, who was traumatized and desperately calling for help in a high-pitched voice after realizing he had shot Steenkamp in error.

Masipa also cited testimony of an acoustics expert called by the defence, saying it cast “serious doubt” on whether witnesses who were hundreds of meters (yards) away in their homes _ as some state witnesses were _ could have differentiated between the screams of a man or a woman.

Earlier, Masipa began by outlining in detail the four charges against the Olympic runner: Murder, two counts of unlawfully firing a gun in a public place in unrelated incidents and one count of illegal possession of ammunition.

Before the session began, Pistorius hugged his brother Carl, who was seated in a wheelchair because of injuries suffered in a recent car crash.

The parents of Steenkamp were also in the packed gallery. Other members of Pistorius’ family, including his father Henke, sat behind him.

If Pistorius is convicted on any charge, the case will likely be postponed until a later sentencing hearing.

There were many journalists at the courthouse, where the sensational trial has unfolded over the last six months.