Our man in Iraq 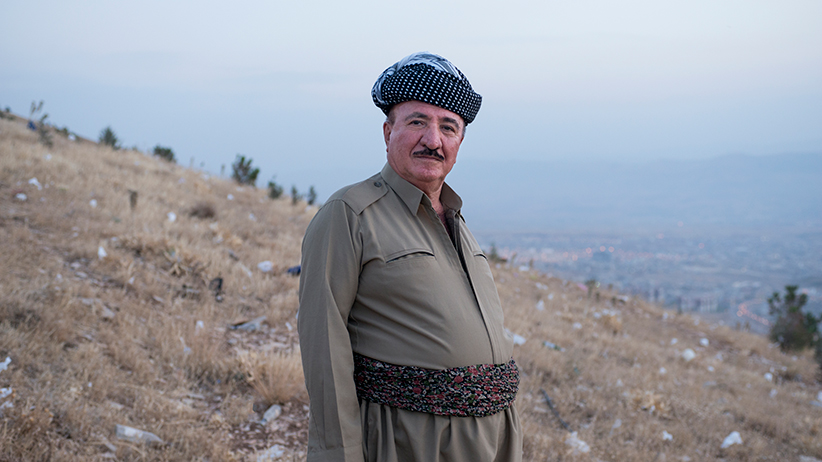 The special operations advisers, pilots and air crew Ottawa is deploying to Iraq and elsewhere in the Middle East—as part of an American-led mission to combat the radical jihadists of Islamic State—are not the only Canadians in the fight. Some have rejected Canada and joined Islamic State. Others, Kurdish Canadians, are members of the peshmerga, the military force of Iraqi Kurdistan and Canada’s partners on the ground in northern Iraq. For at least one, the conflict against Islamic State is a struggle to protect both his homelands.

Anwar Zurar was a senior peshmerga commander during a war between Iraqi Kurds and the Ba’athist regime of Saddam Hussein in the 1970s. “I was a leader from here to Dukan. All this was under my hand in 1974,” he says, referring to some 60 km of terrain north of the city of Sulaymaniyah. But the Kurdish rebels, led by Mustafa Barzani, father of the current president of Iraqi Kurdistan, Massoud Barzani, were defeated and ﬂed to Iran. Zurar came to Canada as a refugee in 1976, settling in Hamilton and working in real estate. He couldn’t come back to Iraq until after the 1991 Gulf War, when a no-fly zone allowed Iraqi Kurds to carve out an autonomous region of their own in northern Iraq. By then, several members of his family had been killed.

Zurar returned to Iraq most recently two months ago, in the midst of Islamic State’s ongoing onslaught. Now, owing to his historic role in the Kurdish resistance, and because he is therefore a target for Kurdistan’s enemies today, Zurar is given a driver and armed bodyguards whenever he is back in Iraqi Kurdistan. At 66, Zurar is a large-bodied man with a thin moustache and tufts of black chest hair spilling out of his olive green shirt that, along with a sash and baggy pants, is part of a Kurdish guerilla’s unofficial uniform. He walks with a slight limp and laughs easily.

“We are mostly retired,” he says, speaking of the role he and his old comrades play in the Kurds’ current confrontation with Islamic State. But he says he has visited with fighting units since returning to Iraq. “Because I am more experienced, if they need me, I go. I don’t have real duties, but everybody knows me from back time. Sometimes they want to get advice from me.”

Zurar says he tells young peshmerga that they face an adversary in Islamic State more dedicated and potentially dangerous than was Saddam Hussein’s regime. Iraqi soldiers in the 1970s were reluctant to attack. “They loved themselves,” says Zurar, and wanted to live. Islamic State fighters are different. “These guys, they kill themselves. They come for you and they never stop,” he says. “You can’t let them near you.”

Zurar says there are other Kurdish Canadians in the peshmerga. As for Canadians who have joined Islamic State, he is contemptuous. “Oh, I hate them,” he says. “They should kill them. They shouldn’t even be Canadian.”

Zurar says Canada has given him the “best life.” “As much as I do for my Kurds, I do two times for Canada, because of the way that Canada helped me and did things for me. I was wounded three times here, but here they didn’t do nothing for me. Over there they give me a retirement. I worked there for years. I made good money. That’s why I love Canada. I am a real Canadian. I lived more of my life in Canada than Iraq.”

The Kurds still lack the heavy weapons they need to defeat Islamic State, says Zurar. He’s especially upset by the plight of Syrian Kurds in the besieged city of Kobani, which has been holding out against a sustained Islamic State offensive for weeks. America is bombing Islamic State positions around the city, which is located on the border with Turkey. But this intervention has not turned back the attack. Zurar says the Kurds in the city should have been properly armed long ago, and other Kurds allowed to join them. “My leg is no good. Otherwise, believe me, I would go to Kobani for fighting,” he says.

Zurar is encouraged by Canada’s deployment of special forces advisers to Iraqi Kurdistan, and by its decision to launch airstrikes against Islamic State. “We are looking forward to Canadian people around here. If I see them somewhere, I would like to be with them. I would like to help them,” he says.

He is not, however, uniformly uncritical of his adopted Canadian home. As the sun sets, and before returning to town for a supper of kebabs in a casual and crowded diner, he takes me into the mountains above Sulaymaniyah where he fought a generation ago. There are families picnicking on the side of the road. Some people are sipping beer.

“You can’t drink outside like that in Canada,” he says, and laughs. “More freedom here.”