Will the country one day be better known for tourism than terrorism?

To anyone who’s tried, it is the best skiing experience they’ve ever had: pristine powder snow and wide-open terrain, breathtaking vistas in every direction and the thrill of being the only person to carve through these slopes in decades. The azure lakes in the distance such a deep shade of blue they appear to have been painted into the landscape by some celestial brush. At the bottom of the mountain, there’s the collection of yurts of the base camp, the warm glow of a campfire flickering golden yellow.

Perhaps the skiers will have heard a strange rumbling in the distance, like thunder—only denser. Then a dull sound like popcorn popping, followed by a plume of smoke rising up from the slopes of another distant mountain. But then there are the attack helicopters, trained to fly in formation, twisting and turning in unison, the dull thuds of the chopper blades a stark reminder that this, after all, is Afghanistan, and no amount of mountaintop isolation can guarantee a complete remove from the other reality.

“From the outside, it looks like chaos everywhere,” says Gull Hussian Baizada, 29, the founder of Rah-e-Abrisham Tours, based in Bamiyan province, an island of peace in north-central Afghanistan. Baizada set up his tour company in January 2011 and has already taken 75 foreign tourists out to ski on the treeless peaks of the Hindu Kush range. The provincial capital, also named Bamiyan, boasts a ski rental shop and guest houses to accommodate the growing trickle of tourists. In the summer months, Baizada takes trekkers to the province’s remote mountains and valleys. Multi-day trips are common, including treks to the otherworldly scenes at Band-e-Amir—the system of pristine, high mountain lakes and caves have been designated Afghanistan’s first-ever national park. Colossal Buddha statues once stood in the region before they were destroyed by the Taliban in 2001.

But the nightmare of Afghanistan at war remains very real, begging the question: is tourism sustainable or even beneficial?

James Willcox, one of the founders of Untamed Borders, a tour company, believes it is. “It’s not too early for tourism in the Wakhan Corridor,” he says, referring to Afghanistan’s mountainous, northeast region, a place untouched by conflict where his company offers alpine trekking tours. “If you put the Wakhan in the same category as Kandahar, it’s like comparing gang-infested Ciudad Juárez with Cancún.”

Well, not quite the same. The Wakhan is a remote, alpine Shangri-La, boasting local cultures with little contact to the outside world, and no tourism infrastructure. But it is a big draw for intrepid tourists, keen to venture where few others have set foot.

The kind of person who would choose to travel there, Willcox says, tend to be “older and able to afford the price tag,” which starts at a couple of thousand dollars. The upshot of having a more mature clientele, he adds, is the ease with which they follow his advice on avoiding danger. Naturally, some cultural missteps are inevitable, but the economic benefits tourism promises far outweigh the risks. Already, locals are being trained as alpine guides, with the help of the Aga Khan Foundation. Guest houses are going up, as well as interest in local artisanship, producing handicrafts intended for the tourism market.

But as in all things Afghan, particularly those with money-making potential, the shadow of corruption looms large, says Ferdinando Rollando, an expert alpine guide from Italy, and founder of Alpistan, an organization helping locals in Bamiyan expand their alpine knowledge. Currently, he says, government involvement in the industry, “like the eco-tourism centre in Bamiyan, has been limited to things that enrich a few government officials.” 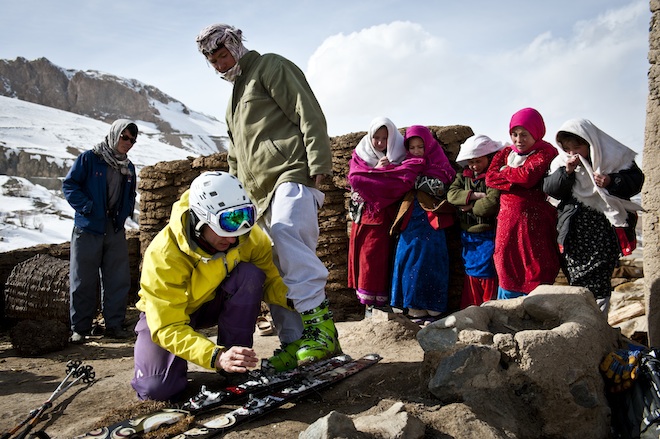 Nonetheless, Rollando is not giving up, despite the uncertainty and potential dangers. NATO’s Afghan mission is still slated to end in 2014. And despite promises that some troops will stay behind, not to mention the potential for an extension of the mission, the exodus of foreign troops remains a dark cloud on Afghanistan’s horizon. “Already I’m seeing a drop in tourists,” says Baizada. “Especially aid workers from Kabul who are my primary customers. When the troops leave, so does the money and the aid workers.”

Willcox, whose client base is not dependent on aid workers, is less concerned. “The only change I foresee,” he says, “is that we’ll need to fly between cities.”

The infrastructure for that is already in place, with a new airline offering a Kabul-Bamiyan flight twice weekly and routes already in operation from Kabul to historic and relatively safe cities like Herat and Mazar-e-Sharif.

But the days of risk-free, affordable, tourism in Afghanistan are a long way off yet (a ski package with Untamed Borders will cost approximately $2,300 for 10 days, excluding flights). For the time being, the potential of mortars and firefights intruding on an otherwise peaceful vacation remains a possibility. And the odds of witnessing war are edging closer to the conceivable as security deteriorates, even in comparatively safe places like Bamiyan.

Nonetheless, the dreamers—people like Baizada and Willcox and Rollando—may yet prove themselves visionary in the long run.