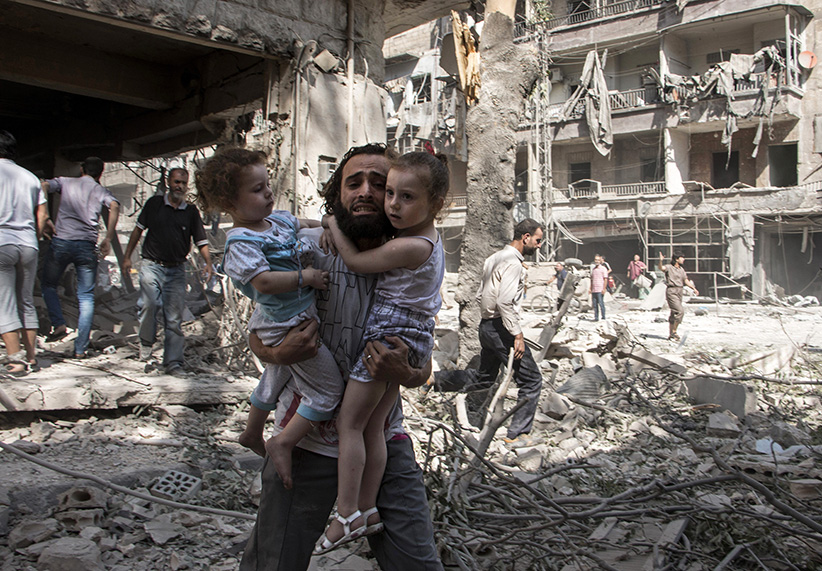 A Syrian man carries his two girls as he walks across the rubble following a barrel-bomb attack on the rebel-held neighbourhood of al-Kalasa in the northern Syrian city of Aleppo on Sept. 17, 2015. Once Syria’s economic powerhouse, Aleppo has been ravaged by fighting since the rebels seized the east of the city in 2012, confining government forces to the west. (Karam Al-Masri/AFP/Getty Images)

“Some may think that a military component has no place in an ethical response to Syria. We completely disagree. It is not ethical to wish away the barrel bombs from the Syrian government when you have the capacity to stop them . . . Nor is it ethical to watch when villages are overrun by ISIS fighters who make sex slaves of children and slaughter their fellow Muslims, when we have the capability to hold them back.”

These words were jointly written and published over the weekend by Jo Cox, a British Labour Party MP, and Andrew Mitchell, a Conservative one.

The barrel bombs to which they refer are one of the main weapons used by Syrian dictator Bashar al-Assad in his quest to hold onto power. They are mostly dropped on civilians. ISIS is an acronym for the so-called Islamic State, a jihadist group that has taken over large chunks of northeastern Syria and western Iraq and has installed a reign of terror in land it controls.

The two MPs are proposing a new strategy for Syria aimed primarily at protecting Syrian civilians. They argue humanitarian and diplomatic efforts should be accelerated, but that Britain’s military can also play a role—including in helping to establish safe havens inside Syria in which civilians will be protected from both Assad’s forces and Islamic State.

According to the Observer newspaper, at least 50 Labour MPs are prepared to back a military mission to protect Syrian civilians. They are willing to co-operate with their political opponents in the Conservative party to further the initiative—and, by doing so, are defying Labour Leader Jeremy Corbyn, who opposes any British military mission in Syria.

The British proposal echoes one put forth by New Brunswick NDP Leader Dominic Cardy, who has called on Canada to lead a campaign to create safe zones and humanitarian corridors in Syria, even if doing so requires the establishment of no-fly zones.

Canada is currently part of a U.S.-led coalition that is bombing Islamic State in Iraq and Syria. It is also training Kurdish fighters to fight Islamic State in northern Iraq. But it has no troops on the ground in Syria and, like its allies, is not directly involved in any military action against Assad’s regime.

There is, so far, no support from Canada’s main national political parties to expand Canada’s military mission to include the creation of safe zones.

The NDP says it would completely end Canada’s military mission in Syria and Iraq if it forms Canada’s next government. The Liberal party opposes Canada’s participation in the air campaign against Islamic State, but says it would continue the training mission. The Conservatives have made no public statements to suggest they would back a military mission to enforce no-fly zones, or to carve out protected enclaves for civilians.

“When I hear people offering up half-baked ideas as if they are solutions, or trying to downplay the challenges involved in this situation, what I’d like to see people ask is, specifically, precisely: What exactly would you do, and how would you fund it, and how would you sustain it?” he said at a press conference. “And typically, what you get is a bunch of mumbo-jumbo.”

Obama thinks protecting civilians in Syria is too hard. He thinks doing pretty much anything in Syria is too hard. So, by and large, he doesn’t. But then 250,000 people die, hundreds of thousands of refugees flood into Europe, and Russia starts bombing the few rebels America is supporting.

What Obama has been willing to attempt is limited. In addition to a covert CIA-run program to arm and train a moderate opposition to Assad, the American military ran a separate program to train Syrians willing take on Islamic State. The trainees were told not to attack Assad, whose regime is responsible for the vast majority of civilian deaths in the Syrian civil war. Not surprisingly, few signed up. A program aimed at training more than 5,000 fighters produced about 60, most of whom defected or were captured.

The White House cancelled the whole program last week. Shortly beforehand, Obama’s people tried to wash his hands of it, claiming he never thought it was a good idea in the first place.

“It is true that we have found this to be a difficult challenge,” press secretary Josh Earnest said. “But it is also true that many of our critics had proposed this specific option as essentially the cure-all for all the policy challenges that we are facing in Syria right now. That is not something this administration ever believed, but it is something that our critics will have to answer for.”

Obama is the Toddler President. He has made the crafting of American foreign policy something akin to a four-year-old refusing to cut his own meat:

(Child ostentatiously knocks food to the floor with his cutlery.)

But if America wants to absent itself from confronting one of the largest humanitarian disasters in decades, perhaps its allies should stop looking to Washington for leadership.

Louis de Bernières, in his wonderful novel Captain Corelli’s Mandolin, describes Britain’s response to the 1953 Ionian earthquake. Ships from the Royal Navy were among the first to arrive with help:

“In those days, Great Britain was less wealthy than it is now, but it was also less complacent, and considerably less useless. It had a sense of humanitarian responsibility and a myth of its own importance that was quixotically true and universally accepted, merely because it believed in it, and said so in a voice loud enough for foreigners to understand. It had not yet acquired the schoolboy habit of waiting for months for permission from Washington before it clambered out of its post-imperial bed, put on its boots, made a sugary cup of tea, and ventured through the door.”

It may be too much to hope that those days have returned. But it is heartening to see evidence of moral life in Britain’s body politic. It is especially heartening to see such life in the Labour Party, where some members—if not its leadership—have evidently not forgotten that international solidarity is an ideal that must be acted on, not just sung about.

The leaders of all three major Canadian political parties like to talk about how Canada’s standing in the world has risen under their party’s watch (Conservatives) or has fallen but would be restored should they form government (Liberals, NDP).

This has too often consisted of little more than chest-thumping about Canada’s rhetorical support for Israel and Ukraine, or hair-pulling about the indignity of losing a seat on the United Nations Security Council to Portugal five years ago.

Syrians, meanwhile, are dying by the thousands, and what’s left of the country is emptying into refugee camps or into overloaded rubber dinghies crossing the Aegean Sea.

Using force to protect those who remain—from Islamic State, but also from Assad—is a more ethical course of action than is crying over their deaths, sending survivors food aid, or letting a handful come here as refugees. Canada’s political leaders have staked out positions that are insufficient. MPs who believe Canada really should be a force for good in the world might consider voicing their dissent.