Pakistan's most widely viewed TV station is teetering on the brink 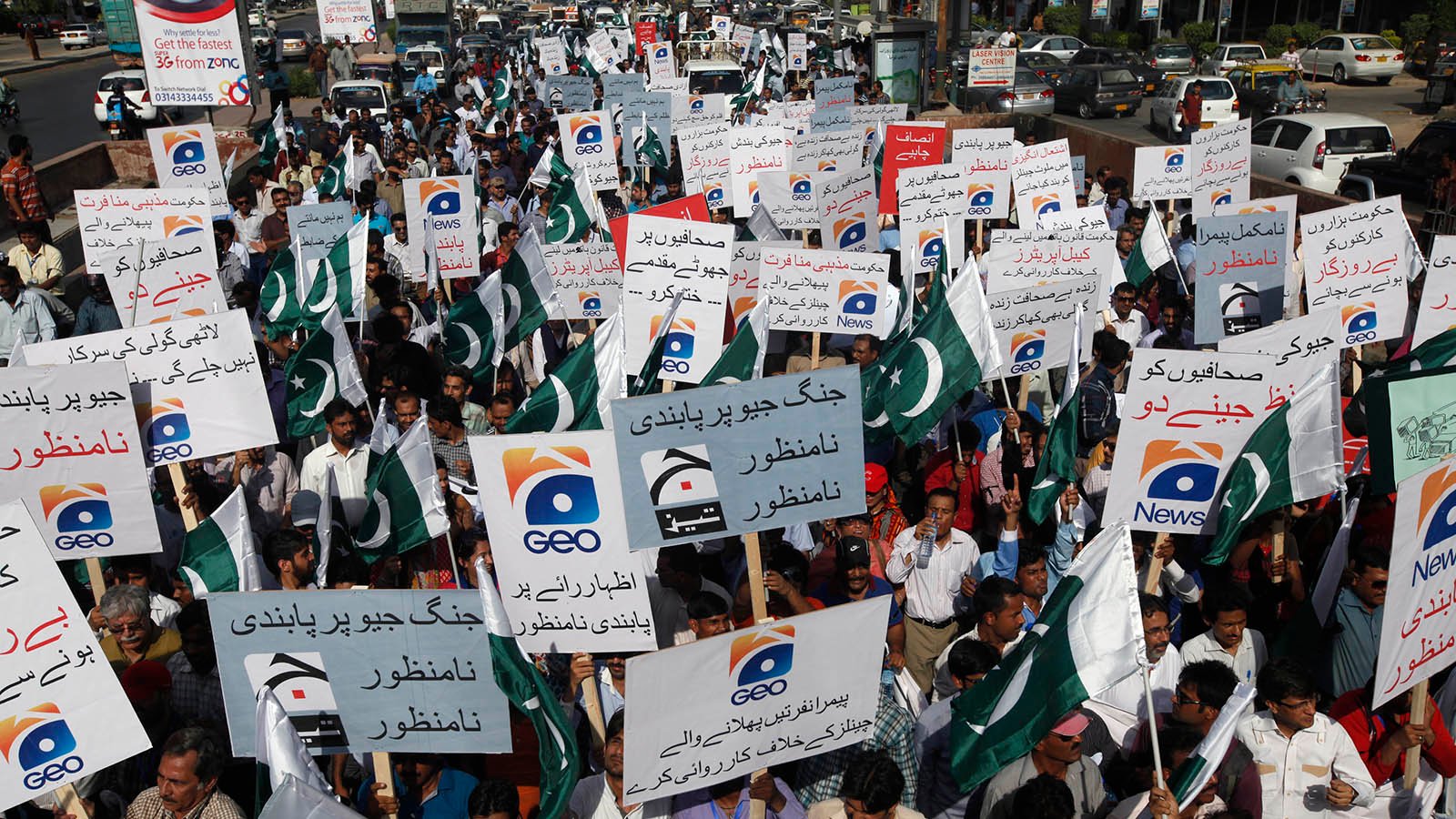 Employees of Pakistan’s biggest television station Geo TV attend a protest against the Pakistan Electronic Media Regulatory Authority after the station’s license was suspended, in Karachi on May 22, 2014. (Athar Hussain/Reuters)

There is something approaching the surreal in the current media controversy playing out in Pakistan: Geo TV, the country’s most widely viewed station, known for its unapologetically outspoken, sometimes racy content, sits teetering on the edge of annihilation. Daggers have been drawn from all quarters: the ISI, Pakistan’s Machiavellian spy agency—angered by Geo’s top brass who accuse it of carrying out a mid-April assassination attempt on one of their star journalists—is demanding that Geo’s broadcasting licence be revoked; religious extremists, miffed again by what they perceive as an insult to Islam after Geo’s morning show aired a mock wedding, are calling for retribution; and rival media outlets, salivating over the windfall of market share available if Geo falls, have taken to publishing and airing virulent attacks on their competitor’s credibility.

Geo’s offices have beefed up security while its news vans have removed the Geo logo. Its journalists, already facing one of the most dangerous work environments in the world, must now contend with being branded traitors and blasphemers. Cable carriers have pushed the station to the bottom end of their listings, meaning many Pakistanis no longer have access to the channel.

The ongoing crisis seemed almost inevitable after more than a decade of unprecedented media freedoms in Pakistan. Since 2002, when former military dictator Pervez Musharraf liberalized the media, Pakistan has experienced an explosion of new players. According to Mazhar Abbas, former secretary-general of the Pakistan Federal Union of Journalists, there are more than 100 TV channels and somewhere around 1,000 newspapers in Pakistan. Competition is fierce.

“What we’re seeing here is growing pains,” says Irfan Raza, a senior correspondent for Dawn News, Pakistan’s oldest and most respected daily news publication. “The Pakistani media is young and inexperienced. The country has a lot of sensitivities. We’re learning how to do our jobs while at the same time respecting other people’s beliefs.” Indeed, some commentators have argued that Pakistan’s media may be too free, lacking a culture of ethics. The fourth estate often resembles little more than poorly scripted melodrama: Journalistic integrity is sacrificed for the sake of viewership and fundamental issues sensationalized to appeal to an increasingly angry and disenfranchised audience.

“Self-regulation hasn’t worked,” says Iqbal Khattak, Peshawar bureau chief for the Daily Times newspaper. “Professionalism is severely lacking among Pakistan’s media practitioners and this is a problem the industry as a whole must address.”

This latest controversy has placed Geo’s questionable tactics under public scrutiny. “It was irresponsible reporting,” says Raza, of Geo’s claim of an ISI assassination attempt. “If you are going to make serious allegations against an important institution like the military, you first need proof.” Geo has backed away from its initial stance, admitting that it might have gone “too far,” but it’s difficult to say if this is simply a response to pressure or a sincere indication of a change in the way it operates.

If it does change, how it does so will be crucial for the future of Pakistani society. There are fears that the attack on Geo could stifle the courage that Pakistan’s journalists have developed in recent years in a country overrun by sacred cows. If it’s not blasphemy or insulting the military, then covering something as seemingly newsworthy as child brides or honour killings can land a journalist on the receiving end of death threats and professional vilification.

But the “ice is thawing,” Raza contends. That Geo felt it could openly accuse the ISI of assassination is something that would have been unheard of a decade ago. The military’s response in turn was novel: it used the proper channel, the Pakistan Electronic Media Regulatory Authority, or PEMRA, to file a complaint. “That is a good sign for democracy in Pakistan,” says Khattak. “The military is recognizing that it must also respect Pakistan’s existing democratic structures even when they are attacked.”

The danger, Khattak adds, is that the military may not allow PEMRA to come to an independent decision. Already the signs are not good: on May 20, five members of the 12-member regulatory committee announced to the media that Geo’s licence would be revoked. Hours later, the remaining members reversed that decision, saying that the five do not represent a majority on the committee and had no legal basis for their decision. “That kind of confusion undermines the entire process,” says Raza. “PEMRA needs to be reformed and empowered. That would be a first step in taming the media environment in Pakistan.”

Ultimately, Raza believes the right decision would be to slap Geo with a significant fine rather than revoke its licence. “The media right now is Pakistan’s most crucial institution,” he says. “We cannot revert to the old days when we journalists operated in a suffocating environment. We have made progress. It still may be chaotic and a little wild out there but the industry is learning. And that is a good thing.”