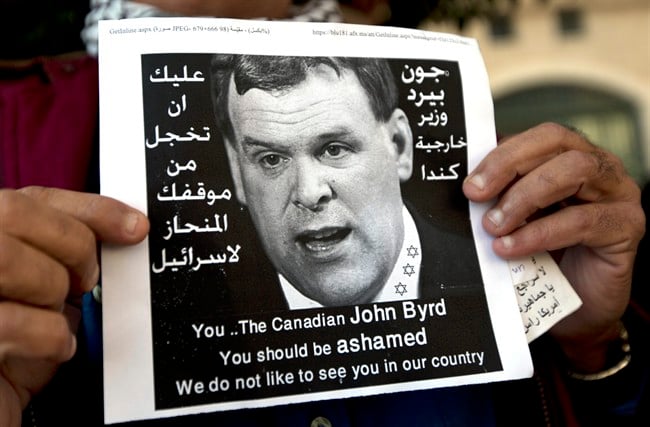 A Palestinian protester holds a poster with a photo of Canadian Foreign Minister John Baird that reads in Arabic, ‘You should be ashamed of your biased position towards Israel.’ (Nasser Nasser/AP Photo)

The protesters held signs reading: “Baird you are not welcome in Palestine.”

Activists from Palestinian President Mahmoud Abbas’ Fatah party had earlier called for a boycott of the minister because of the Canadian government’s perceived pro-Israel stance.

Baird is in the region for four days of meetings with Israeli and Palestinian officials.

In a statement this morning, he described his meeting with Malki was “cordial and constructive,” and said it included “candid and frank exchanges on areas where we differ in opinion.”

Canada is opposed to the recent Palestinian bid to pursue war crime charges against Israel.

Baird’s statement says he asked Malki to “strongly reconsider the consequences of moving forward with any action that may be counterproductive to a negotiated solution with the State of Israel.”

It was also his first meeting with the Palestinian Authority since the United Nations Security Council blocked a Palestinian motion to set a three-year deadline for the establishment of a Palestinian state on lands occupied by Israel.

Baird has spoken out against the move, as he has with similar Palestinian statehood initiatives at the U.N..

The minister later met in Jerusalem with Israeli Foreign Affairs Minister Avigdor Lieberman, and is scheduled to meet with other Israeli politicians.

In a statement, Baird noted his meetings come a year after Prime Minister Stephen Harper’s visit to Israel, and the two signed a declaration outlining co-operation in the diplomatic, trade and development areas.

“Canada strongly supports Israel’s right to defend itself by itself and its right to live in peace with its neighbours. Canada will fight any efforts internationally to delegitimize the State of Israel, including the disturbing Boycott, Divestment and Sanctions (BDS) Movement.”

— With files from The Canadian Press