The Palestinians want to pursue war crimes against Israel, and for the U.N. to set a deadline for an Israeli troop withdrawal

By By Karin Laub And Mohammed Daraghmeh April 1, 2015 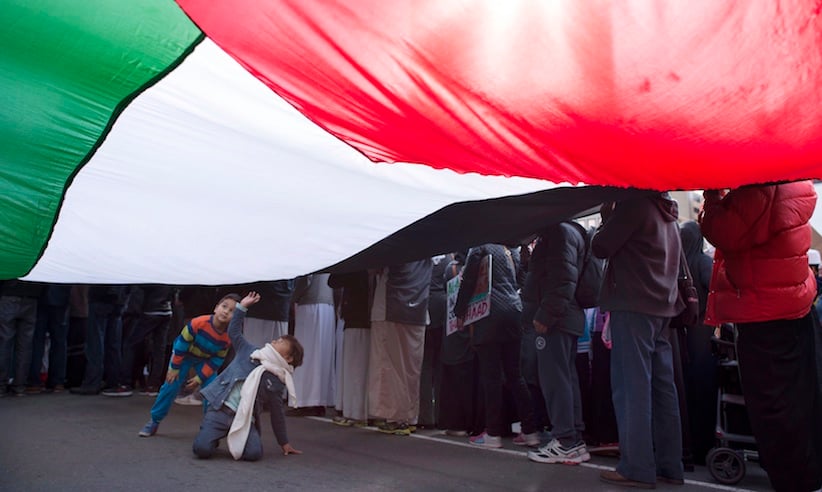 RAMALLAH, Palestinian Territory – The Palestinians formally joined the International Criminal Court on Wednesday, as part of a broader effort to put international pressure on Israel and exact a higher price for its occupation of lands sought for a Palestinian state.

Beyond seeking war crimes charges against Israel at the court, the Palestinians want the U.N. Security Council to set a deadline for an Israeli troop withdrawal and hope for new momentum of a Palestinian-led international movement of boycott, divestment and sanctions.

The atmosphere seems ripe for international intervention after recently re-elected Israeli Prime Minister Benjamin Netanyahu startled the world with a pledge to voters, since withdrawn, that he would not allow a Palestinian state to be established.

But a legal and diplomatic showdown isn’t inevitable as aides say Palestinian President Mahmoud Abbas isn’t interested in an all-out confrontation with Israel. War crimes charges against Israel could be years away and Washington likely will soften any Security Council resolution on Palestinian statehood.

Here is a look at what’s expected:

Attempting to lower expectations among Palestinians of speedy court action, Malki told the Voice of Palestine radio Wednesday: “I don’t want to disappoint our people, but the ICC procedures are slow and long and might face lots of obstacles and challenges and might take years.”

Prosecutor Fatou Bensouda already launched a preliminary review to determine if there are grounds for an investigation of possible war crimes in the West Bank, Gaza and east Jerusalem – lands captured by Israel in 1967 and recognized by the U.N. General Assembly in 2012 as the “state of Palestine.”

A senior Palestinian official said the Palestinians will wait for the outcome of that review – which can take months or years – before considering further action. He spoke on condition of anonymity because he was not authorized to discuss Palestinian strategy.

Earlier this year, the Palestinians accepted the court’s jurisdiction dating back to June 2014, to ensure that last summer’s Gaza war between Israel and the militant group Hamas will be included in any review.

The Palestinians suffered heavy civilian casualties in the war, prompting allegations by some rights groups that Israel committed war crimes. Hamas, which rules Gaza, is also exposed to war crimes charges because it fired rockets indiscriminately at Israeli civilian areas.

Israel’s settlement construction, deemed illegal by much of the world, is also bound to be examined by the prosecutor. Since 1967, Israel has moved more than 550,000 of its civilians to occupied lands.

Palestine’s court membership could help shift focus to settlements as a legal and not just a political issue, said Alex Whiting, a former official in the international prosecutor’s office.

Israel and Palestine also will have to show that they are looking into possible war crimes on their own _ a shield against ICC involvement if deemed credible. Israel says it’s investigating alleged violations by its troops in Gaza. Hamas is not investigating its actions, claiming rocket attacks were self-defence.

France is working on a Security Council resolution that would set the parameters for a Palestinian statehood deal. The draft would define the pre-1967 frontier as a reference point for border talks, designate Jerusalem as a capital of two states and call for a fair solution for Palestinian refugees.

Last year, the council rejected a Palestinian resolution demanding an end to Israeli occupation within three years. The U.S. opposed that draft, saying Palestinian statehood can only be achieved through negotiations, but didn’t have to use its veto.

French diplomats now say they are working on a new draft with their allies, including the U.S., to ensure broad support. A resolution could be introduced later this month.

The U.S. said after Netanyahu’s comments on Palestinian statehood that it would re-evaluate its approach to the Israeli-Palestinian conflict – a possible sign that Washington would no longer shield Israel in the Security Council.

They want internationally backed ground rules, after Netanyahu rejected the pre-1967 lines as a starting point. However, they also fear they’ll get a resolution that lacks enforceable deadlines and instead introduces the definition of Israel as a Jewish state. Abbas opposes such wording as a threat to the “right of return” of Palestinian refugees.

BDS activists promote different objectives, with some focusing on a boycott of the settlements and others saying everything Israeli must be shunned until Israel withdraws from occupied lands.

The movement has scored recent successes, including some European businesses and pension funds cutting investments or trade with Israeli firms connected to West Bank settlements.

Nahshon, the Israeli official, dismissed BDS campaigners as a small group driven by anti-Semitism and “a wish to destroy” Israel.

Netanyahu and Abbas have signalled that they don’t want strained relations to break down.

Israel initially punished Abbas for seeking court membership, freezing monthly transfers of more than $100 million it collects for the Palestinians. Israel resumed the transfers after three months amid warnings that a continued freeze could bring down Abbas’ government.

Abbas has indicated he won’t end security co-ordination between his forces and Israeli troops in the West Bank that is aimed at shared foe Hamas.

Abbas also told senior PLO officials in March he remains committed to negotiations and would go along with the idea of an international peace conference, proposed by France, “despite low expectations.”