Just days before the referendum, Scotland’s pro-independence Yes side has taken the lead. Can No come back? 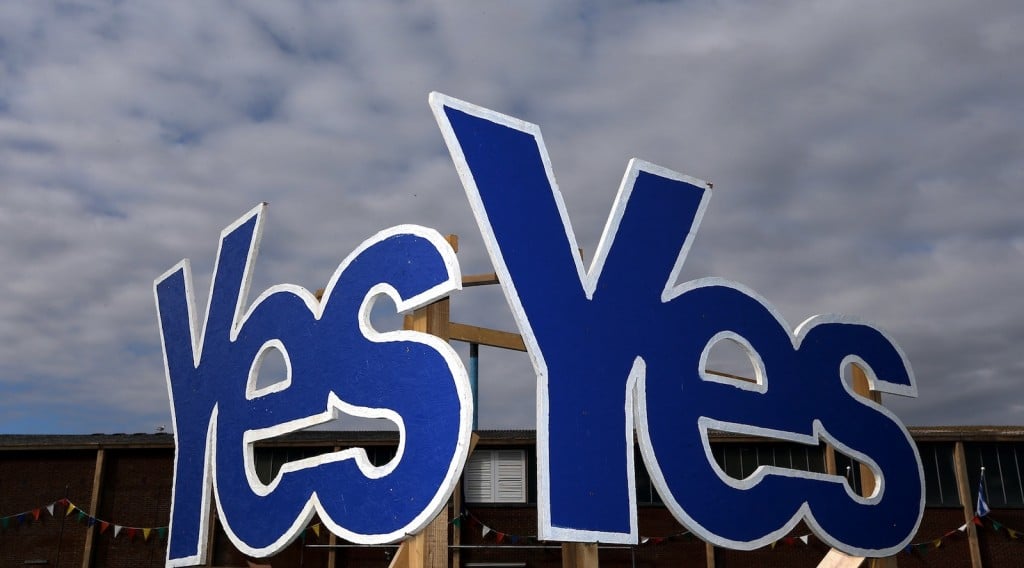 After two years of trailing in the polls, a surge: A new poll shows Scottish pro-independence warriors in the lead for the first time, with just days to go before the national referendum on independence. In this latest YouGov survey, released on Sunday, 51 per cent of decided voters said they planned to vote Yes (as in, yes for independence) on Sept. 18. It marks a fantastic fall for the pro-union camp, which had a 22-point lead just one month ago. Hours after the poll’s release, Alistair Darling, leader of the No team, called it “a wake-up call.”

Until this month, a No victory seemed all but inevitable. But now, demographic groups that have consistently leaned No—older voters, female voters, Labour party members—have registered a change of heart. The U.K., a 307-year-old union, may yet be torn asunder. Cue panic. On Monday, back in London, a rattled government hurried to pick up the pieces. Chancellor of the Exchequer George Osborne pledged to devolve “more tax powers, more spending powers” to Edinburgh. (The announcement was quickly dismissed by Scottish First Minister Alex Salmond, leader of the Yes side, as “panicky.”)

Then came a gust of dramatic headlines: “Ten days to save the Union” (Daily Telegraph); “Tartan alert” (The Sun); “No, we will NOT share the pound” (Metro); “Nothing else now matters in British politics” (The Guardian). The latter was true, perhaps, for several hours—until it was announced that the duchess of Cambridge is pregnant again, and #Royalbaby2 hysteria mounted.

Tabloids focused on the alleged reaction in royal quarters: “Queen’s fears over breakup of Britain” (Daily Mail); “Don’t let me be the last Queen of Scotland” (Daily Mirror). According to YouGov, 54 per cent of Scots want to retain the Queen as head of state in the event of a Yes vote—though only 45 per cent of those surveyed in the larger U.K. think an independent Scotland deserves to keep her.

So how to explain the Yes surge? The standard line is that Scottish separatists have managed, via grassroots campaigning, to win the hearts of undecided voters. But John Curtice, politics professor at Strathclyde University, thinks there’s something more to it. “As far as there has been movement, it was not necessarily made by people who were undecided. [Rather] people who thought they were going to vote No are changing their minds.” Curtice says Scots are losing faith in No’s claims about the financial risks of a Yes vote. “The more they make this point,” says Curtice, “the less they are believed.” Indeed, YouGov figures shows that 40 per cent of voters think Scotland would be better off after independence, up from 27 per cent in June.

Many business leaders think otherwise. The Royal Bank of Scotland has already indicated that it would relocate to England in the event of a Yes vote, and experts predict that a great chunk of Edinburgh’s financial services would follow. On Monday, shares in Scottish-based firms like Standard Life and Lloyds Banking Group slipped on the stock market, as did those of several energy suppliers. “I don’t think panic would be the right word,” cautions Owen Kelly, chief executive of Scottish Financial Enterprise, an industry trade group; but Scottish companies are busy hedging against currency swings—and making contingency plans.

Meanwhile, the No team, a motley mix of Britain’s three main political parties, is trying to show a united front. Former prime minister Gordon Brown (a Scot) has launched a tour of Scotland’s heartlands, aimed at making a positive case for togetherness. But the clincher, No leaders hope, will be Westminster’s pledge to devolve more tax and spending powers to Scotland in the event of a No vote—a proposal known as “devo max.” Leaders in London this week promised to firm up plans for how devolution would proceed. Some unionists believe that the move will sweeten the union deal, and quell separatist fervour. But on Sunday, the Times warned of another possibility: that the promise of devolution “merely scotches the snake of nationalism rather than kills it.”

The narrow margin dividing Yes and No has many Scots worried that Sept. 18 won’t be the end of the fight, even if Scots vote to stay. The threat of further votes—a “neverendum referendum”—looms. On Monday, the BBC ran an article on the prospect of “independence, Quebec-style,” which featured a man who “considers himself a Quebecer first and a Canadian second.” Near the end of the article, the author quotes former Parti Québécois leader René Lévesque, tearfully addressing supporters on the night of Quebec’s 1980 vote: “A la prochaine”—or, “until the next time.”