One year on from terror, Paris is still healing

The survivors of last year's terrorist attacks in Paris still struggle with recovery, both physical and mental

By Angela Charlton and Oleg Cetinic, The Associated Press November 11, 2016 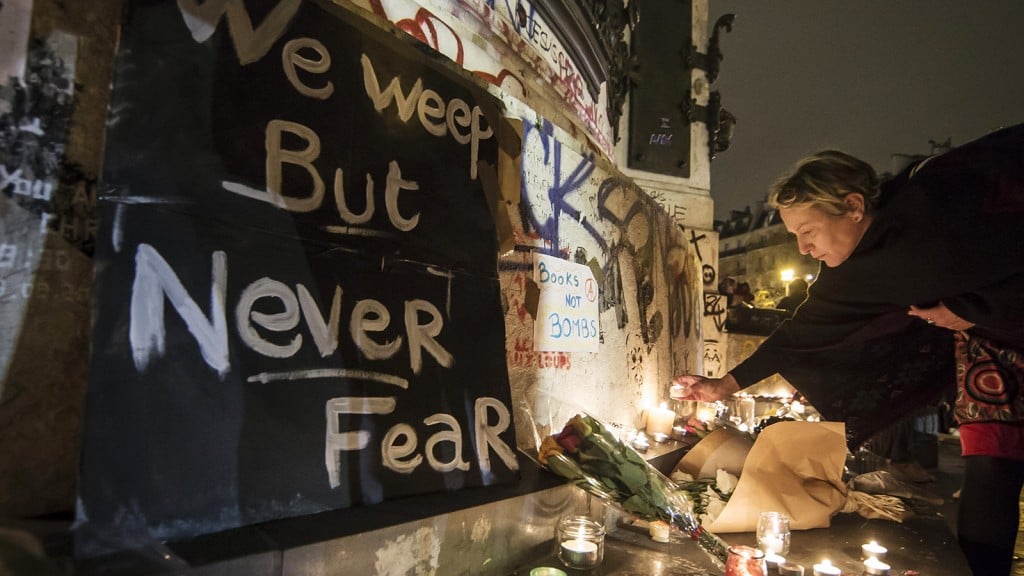 People place flowers and light candles in tribute for the victims of the 13 November Paris attacks at the foot of the statue on Place de la Republique in Paris, France, 14 November 2015. (IAN LANGSDON/EPA/CP)

PARIS – The flashbacks come to Denys Plaud unbidden, making it hard to work: Gunshots threatening to pierce his cramped refuge in the Bataclan theatre. The excruciating silence between rounds of fire. And when it was all over, stepping over the dead and dying to reach freedom.

One year on, survivors of France’s deadliest extremist attacks are trying to look to the future, but they will never forget.

More than 1,700 people have been officially recognized as victims of the horror that unfolded on Nov. 13, 2015, at the Bataclan, Paris cafes and the national stadium. In addition to the 130 who died, nine remain hospitalized and others are paralyzed or otherwise irreparably damaged. According to the government’s victims’ minister, more than 600 are still receiving psychological treatment.

A year “was the minimum period of time for me to recover,” and to mourn the dead, Plaud said. “Like a veteran, I will always have to live with this horrible (memory). You cannot make them fade. You can learn to live with them.”

Plaud, a 48-year-old math and physics tutor, wrote a book to process his anguish. Cafe owner Gregory Reibenberg, whose wife died in his arms, also wrote a book, to help their 9-year-old daughter heal, and “to find sense in the senseless.” Another survivor turned his flashbacks into a graphic novel, depicting the attackers as skeletons and sprinkled with poignant humour.

As France prepares to mark one year since the attacks with commemorations Sunday, Plaud still seems surprised that he escaped alive that night.

Related: Inside the horrifying scene at Paris’s Bataclan Theater

Itching to dance as he watched a concert by California rock band Eagles of Death Metal, he left the crowded dance floor for the balcony, for more room to move around.

“I just heard what sounded like firecrackers, and the first seconds I thought that someone is spoiling the show – or maybe that it was part of the show. But when I heard some shots, some screaming from people being shot, I told myself there’s something wrong,” he told The Associated Press this week. “I ran.”

He and about 15 others hid in a small room and called police, who told them to keep quiet until emergency crews came.

“We were listening to some shooting and screaming, and when we thought it was over it was just the time the terrorists would reload their weapons and shoot again,” he said. At one point, bullets hit a wall he was squeezed against, and he felt it shake.

When the silence and strain became too much for someone in the cramped room, he recounted, the others would softly say “shhh” – to show “we were together, we were a unit, there was no one left alone.”

“When finally the emergency crew came to rescue us, we passed from that dark, tiny room to full light with a bloody battlefield . And policemen every five meters telling me ‘don’t look at them, mister, they are dead, you cannot do anything,”’ he said. But “there were so many corpses I had to look where I put my feet.”

Today, the memories sometimes pierce his concentration when he is teaching, and he has to stop. 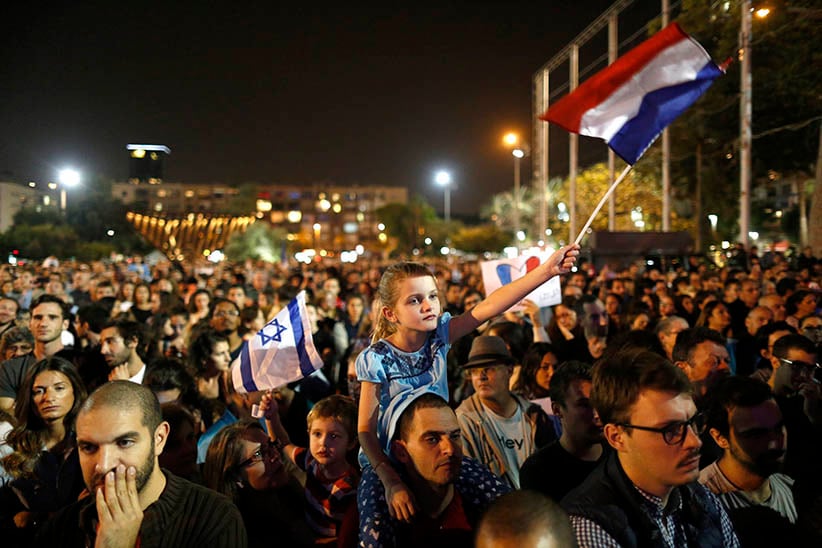 People gather to show solidarity for the victims of the 13 November Paris attacks in Rabin’s square in Tel Aviv, Israel, 14 November 2015. (ABIR SULTAN/EPA/CP)

Survivor’s guilt is a problem for some. And many are still recovering from injuries.

Daniel Psenny was working from his apartment across from the Bataclan when he heard gunshots and saw panicked people escaping via the emergency exit and windows. He went down to help, pulled an injured American man into his building, reached to close the door – and was shot in the arm by an automatic rifle.

Psenny, a journalist for Le Monde, continues to undergo physical therapy after the shot burned his nerve endings. “I’ve lost part of the sensations and mobility in some fingers,” he said. “It’s a bit better than one year ago because I am on my feet and alive. But it’s quite tiring and heavy-going.”

“We are not like we were before. There is a ‘before’ and an ‘after’ November 13th, in the way of being, looking, seeing, even if, in my case, I continue going to a performance, to a movie, take flights, and get on with my life.”

Survivors also face frustrations – the protracted investigation, the French bureaucracy required to be recognized as victims – allowing for government compensation and medical support. And what they see as injustices, like not being invited to the Bataclan’s reopening concert with Sting on Saturday night. Families of those who died were given the priority instead.

Related: After Paris: The new war on terror

Reibenberg has chosen to look to the future after what happened that night, when 19 people were killed in his cafe, La Belle Equipe. His wife Djamila’s last words were “take care of Tess,” their daughter. His “guardian angel,” cafe manager and longtime friend Hodda Saadi, also died, along with her sister Halima, celebrating her 36th birthday.

“What these (attackers) were targeting, we were representing it fully – diversity, mixing, sharing,” said Reibenberg. A French Jew, his wife was Muslim and his staff had roots reaching to Burkina Faso, Tunisia, Mexico, the Alps…

Reibenberg spoke from his apartment near the attack sites in the 11th arrondissement – and near a new tea shop he’s opening soon, expanding his business because he refuses to give in to fear.

His message for the attackers is clear: “It’s not because you shoot us and take away our cherished ones that we will suddenly become stupid and hateful people who will stop loving others.”

Catherine Gaschka contributed to this report.