One year since terrorists attacked restaurants, a music venue, and a football stadium, Paris remembers 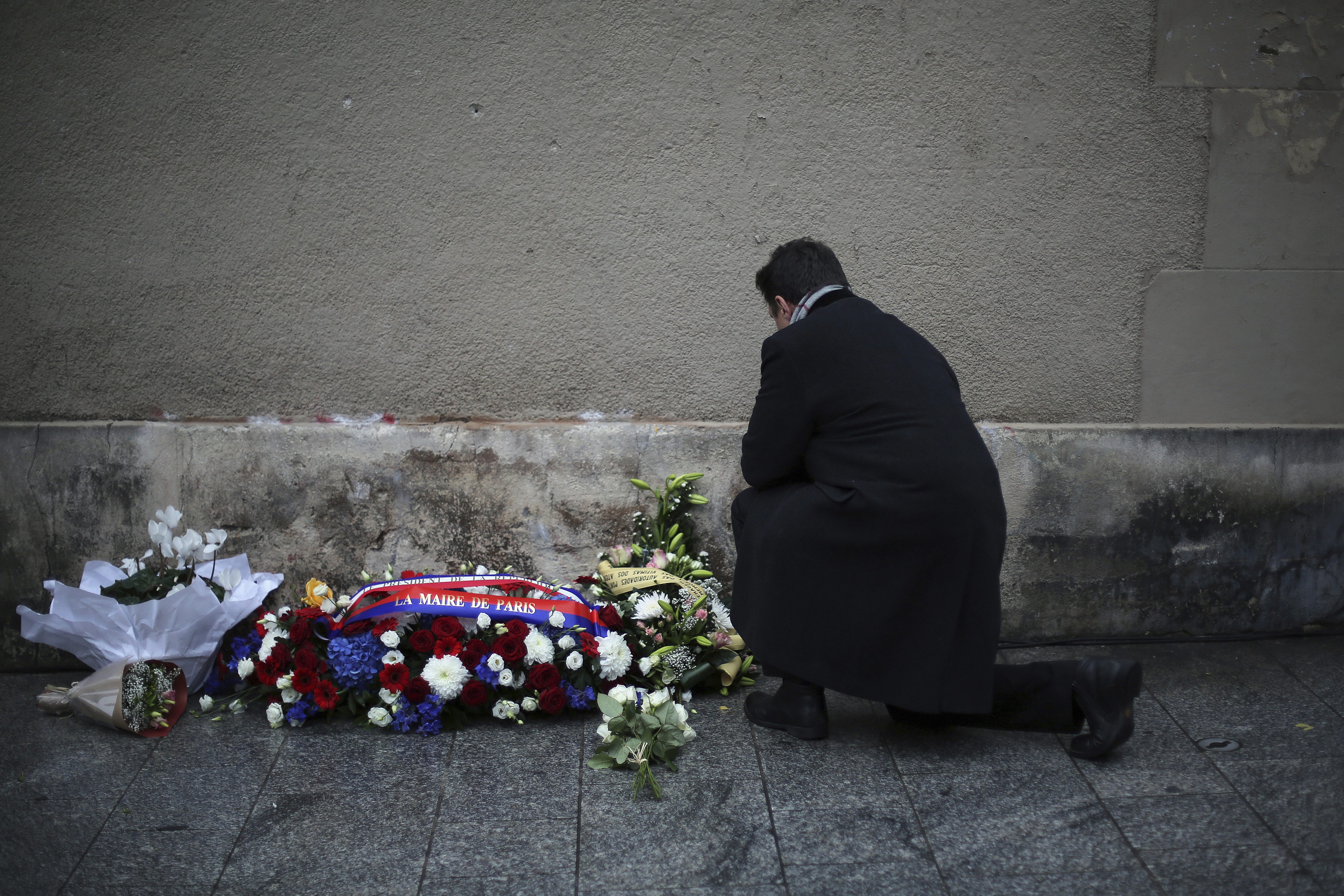 A man lays a flower next to the restaurant Le Petit Cambodge (Little Cambodia) and the Carillon Hotel in Paris, Sunday, Nov. 13, 2016. (AP Photo/Thibault Camus)

PARIS – France marked the anniversary of Islamic extremists’ co-ordinated attacks on Paris with a sombre silence on Sunday that was broken only by voices reciting the names of the 130 slain, and the son of the first person to die stressing the importance of integration.

Michael Dias lauded the lessons his father Manuel, an immigrant from Portugal, taught him so youth can integrate instead of turning themselves into “cannon fodder.”

Under heavy security, President Francois Hollande unveiled a plaque outside the Stade de France “in memory of Manuel Dias,” pulling away a French flag covering it on a wall at one of the entrances to the French national stadium, where Dias was killed on Nov. 13, 2015, by a suicide bomber.

Paris Mayor Anne Hidalgo joined the president six other sites where crowds ate, drank or reveled in music at the Bataclan concert hall. The Islamic State group claimed responsibility for the attacks .

At the Stade de France, on the northern edge of Paris, Michael Dias said his father Manuel was “living proof that integration is possible, necessary” to end the madness of violence carried out by those who felt excluded.

Learning to live again after extremists killed his father was “a personal challenge, but it concerns us all,” Dias said, crediting his father, who came to France at 18, with life lessons like the need for education.

“It is by knowledge, by intelligence that the children of tomorrow can stop humiliating themselves as cannon fodder in the service of criminal, mafia-style interests … as is the case today. (They are) incapable of reflection, thinking about the world and expressing the unease and social exclusion they feel.”

The final stop, the Bataclan concert hall – which reopened Saturday night with a concert by British pop star Sting – was the site of the bloodiest and longest attack. There, 90 people were killed by three attackers who also took a group of people hostage. The youngest and oldest victims of the night of horror were a 17-year-old and a 68 year-old – both killed at the Bataclan.

Families of victims, security and rescue forces and some still trying to heal were among those present at the ceremonies. Jesse Holmes of the Eagles of Death Metal, the California band whose concert that night ended in a bloodbath, paid respects at the Bataclan ceremony, placing his hand on his heart as he departed.

More: One year on from terror, Paris is still healing

In addition to those killed, nine people remain hospitalized from the attacks and others are paralyzed. The government says more than 600 people are still receiving psychological treatment after the attacks.

A sign scrawled and posted near the Bataclan, “Love for all, hate for no one,” captured the sense of defiance shared by many – but not all. Some residents of the lively neighbourhood where most of the attacks occurred are still trying to heal.

“We always have this fear that weighs heavily in our hearts. We always try to be careful. And every time we pass by here, we think of them,” Sabrina Nedjadi said.

Soubida Arhoui said fear is now part of her life.

“I am afraid for my children, when they take the Metro. When my son goes to work, I am afraid. When I get into a Metro I am afraid.”

“This anniversary is a further reminder of the volatile terrorist threat faced in Europe today,” said a statement by Europol, the European police agency.

The remembrances come after the Sting concert Saturday night that reopened the refurbished Bataclan concert hall.

Sting, in a T-shirt with a guitar slung over his shoulder, asked concert-goers in fluent French to observe a minute of silence as he opened the show.

“We’ve got two important things to do tonight,” the 65-year-old singer said. “First, to remember and honour those who lost their lives in the attacks a year ago … and to celebrate the life and the music of this historic venue. … We shall not forget them.”

He then strummed out a string of hits, including “Fragile” and “Message in a Bottle.”

Elodie Suigo, who lost six friends in the attack, said it was a hard night.

“It was difficult going through that door. I don’t think I was the only one… We cannot say it was a magical moment because of everything that changed in our lives. But (Sting) is a really great man,” she said.

With more than 400 rounds fired within 10 minutes at the restaurants, the co-ordinated attacks were a wake-up call for France and for Europe. They followed the January 2015 newsroom massacre at the satiric newspaper Charlie Hebdo in Paris and a Kosher grocery store that left 17 dead. But the complex planning behind the Nov. 13 attacks and the high number of deaths revealed a degree of French vulnerability not previously suspected by authorities.

Neighbouring Belgium, the starting point of the attacks in Paris, was hit a few months later on March 22 with attacks on its airport and a metro station that killed 32 people.

France declared a state of emergency after the Nov. 13 attacks. It is still in effect, and Prime Minister Manuel Valls told the BBC that it would likely be extended. Still, that failed to prevent the killing of a police couple in their home last June, the July 14 Bastille Day truck attack in Nice that killed 86 revelers and the slaying of a priest at the altar of his Normandy church in July.

Valls warned earlier this weekend that “Yes, terrorism will strike us again.” But, he contended, “we have all the resources to resist and all the strength to win.”