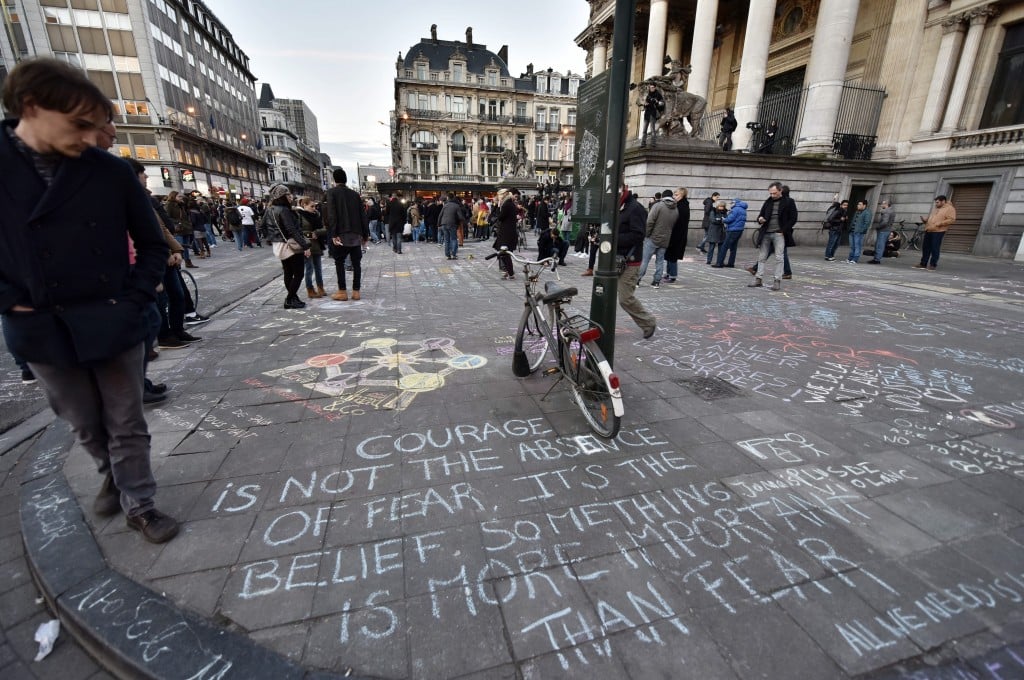 People write hundreds of messages on the asphalt at Place de la Bourse in the center of Brussels to mourn for the victims of todays attack, Tuesday, March 22, 2016. Bombs exploded at the Brussels airport and one of the city’s metro stations Tuesday, killing and wounding scores of people, as a European capital was again locked down amid heightened security threats. (AP Photo/Martin Meissner)

BRUSSELS – A pedestrian strip outside the stock exchange in Brussels became a colorful canvas of support and defiance after Tuesday’s deadly bombings as those wanting to show solidarity chalked messages – in French, Flemish, English, Arabic and Cyrillic script and more.

A few thousand people were gathered at Brussels’ Place de la Bourse late Tuesday to draw more messages and lay candles. One group broke into Edith Piaf’s “Hymne a L’amour” (Hymn to Love) as onlookers applauded. Next, they broke into the Belgian national anthem, in both the country’s national languages – French and Flemish.

Many of the drawings were joyous, with slogans like “spread love,” ”Live and Let Live“ and ”we are one.“ Others took a more defiant tone, and the vibe was generally upbeat.

But at the margins, there was sadness. One woman sat against a concrete planter at the edge of the square and sobbed quietly.

The messages ran from the political – “Stop this war in Syria” – to the peaceful – “Love is my religion.” Some were simply raw – “I’m scared.”

At the centre of the square, a memorial was improvised out of flags, tea lights, balloons, flowers and – because this is Belgium – beer bottles.

Some laughed with friends. Others cried quietly alone or on their partners’ shoulders.

Pepijn Kennis, 27, had tears in his eyes as he and his girlfriend drew the words “Hart Bove Haat” (Heart over Hate) in pink and yellow chalk in front of the Bourse. Kennis said he was distraught by the sight of soldiers and heavy weaponry now commonplace across the capital.

“The minute we put soldiers in the street, they’ve won,” he said.

Karien Fouwels was gently scolding her daughter Chiraz as they lit a candle for the vigil.

“It’s important for us to be here,” she told her daughter as the latter complained that there were “no kids around.”

Fouwels, a 47-year-old account director, smiled warmly when asked why she came.

“Our whole life is in this city,” said Fouwels, a Brussels native. She said she dragged her 13-year-old out to show her that “we can’t stop living just because of some monstrous idiots who are driven by ideology. That’s why we bring coffee to soldiers. Why we bring flowers to vigils. Again and again.”

“It has to be a lesson for my little girl,” she said, as her now-mollified daughter leaned against her. “That she learns … never to be scared.”