Peter Greste: 'Won't give up until Baher and Mohamed are out'

Family of Australian journalist express 'sense of unreality' about homecoming 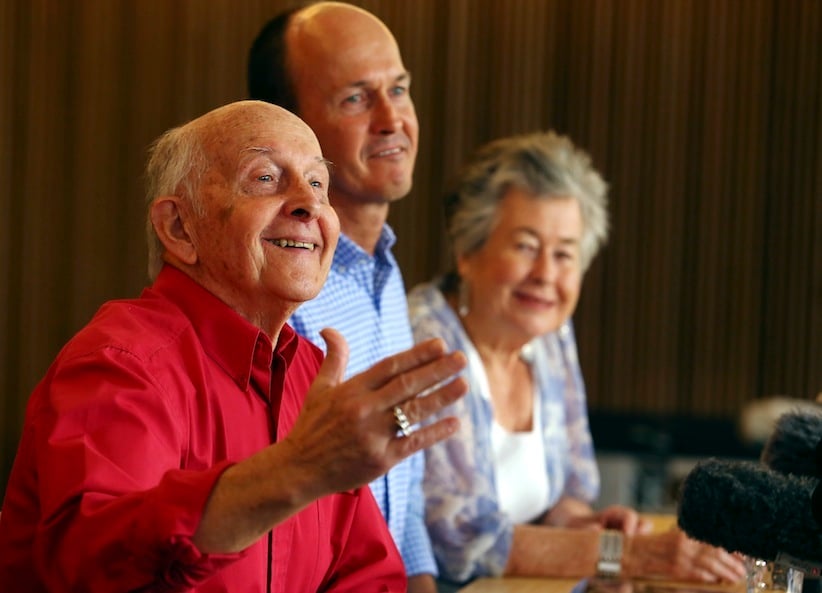 SYDNEY, Australia — For more than a year, the parents of jailed Al-Jazeera English journalist Peter Greste kept up a relentless, resolute campaign to free their Australian son from an Egyptian prison. Over and over, they slid behind a microphone-laden table to face hordes of journalists at regular news conferences, pleading for Greste’s freedom even as their hearts were repeatedly broken by false rumours of his release.

On Monday, the misery that had been etched on their faces had been transformed into beaming grins as they bounded over to the microphones once more — this time, to proclaim their son a free man.

“There is still a sense of unreality about it all, much like the day 403 days back when we received a call one night that Peter’s in an Egyptian prison,” said Greste’s father Juris, who donned a festive red shirt and matching hat — a stark departure from his typically subdued attire. “To me, it is yet to quite sink in where we are, what’s happened.”

What happened was a surprise to many. Greste was released from prison and deported Sunday after a presidential “approval,” according to an Egyptian prison official and the nation’s official news agency. The official and an Interior Ministry statement said he was released under a new deportation law passed last year.

But the joy over Greste’s release was tempered by the news that two of his colleagues, Egyptian-Canadian Mohamed Fahmy and Egyptian Baher Mohammed, remained jailed. The trio was arrested in 2013 over their coverage of the violent crackdown on Islamist protests following the military overthrow of President Mohammed Morsi. Egyptian authorities accused them of providing a platform for Morsi’s Muslim Brotherhood, now declared a terrorist organization, but officials never provided any concrete evidence.

Greste, who was whisked out of Egypt on a flight to Cyprus, was in a state of disbelief about his freedom and deeply relieved — but still worried about his imprisoned friends, said his brother, Andrew Greste.

“His excitement is tempered and restrained and will be until those guys are free,” Andrew Greste said at the news conference in Brisbane. “He won’t give up until Baher and Mohamed are out of there.”

Greste and his brother Mike were still in Cyprus on Monday, and the family was not yet sure when they would return to Australia. Soon after arriving on the Mediterranean island, the brothers indulged in beer and pork — “Two of the rare commodities in an Egyptian prison,” Andrew Greste said with a laugh.

The family first began hearing on Sunday morning that Greste might be released, but approached the rumours with caution. It was only once the journalist was on a plane to Cyprus that they allowed themselves to rejoice.

The Grestes were not sure exactly what triggered the release, but credited efforts by everyone from the Australian government to U.S. President Barack Obama to the media who kept the case alive, putting pressure on the Egyptian government to act.

Greste’s mother Lois said her son would need some time to readjust and come to terms with the enormity of what had happened. But she believed he would bounce back, noting that he had spent much of his time in prison meditating in order to preserve his mental health.

“Thank goodness this is all over,” she said. “Even though I sort of dreamed about it quietly, not daring to think about it too much, it’s arrived now.”

The family planned to finally celebrate in earnest later Monday by cracking open a bottle of champagne they bought more than a year ago when they wrongly assumed Greste would be found innocent of the charges.