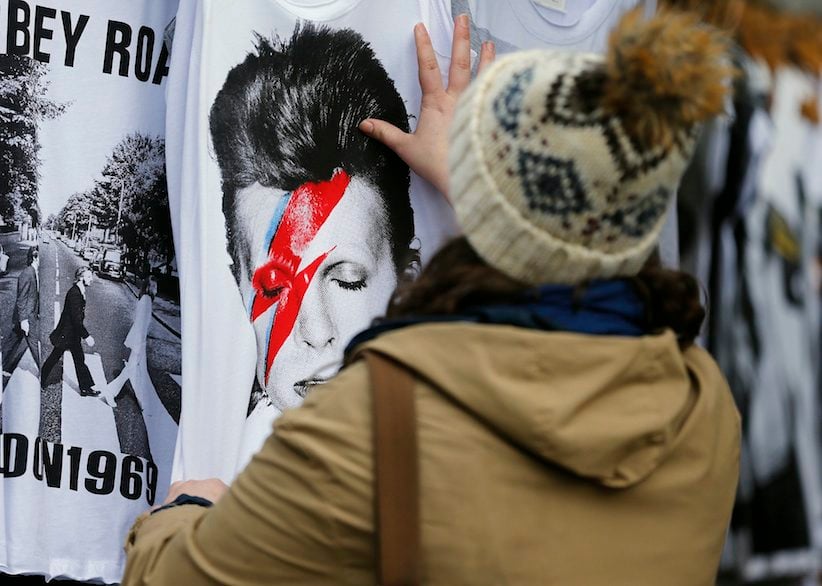 LONDON — Tributes have poured in for singer David Bowie, who died Sunday aged 69. Politicians, entertainers, actors and astronauts have expressed their sadness at his death.

Here is a look at some of the reactions:

“Very sorry and sad to say it’s true. I’ll be offline for a while. Love to all.”

I’ll never forget hearing Under Pressure for the first time – David Bowie was a fearless original with the power to charm. We'll miss him.

RIP #DavidBowie. You will be missed. pic.twitter.com/XzUN3qcvjU

Astronaut Tim Peake, who is aboard the International Space Station:

“Saddened to hear David Bowie has lost his battle with cancer — his music was an inspiration to many.”

David was always an inspiration to me and a true original. He was wonderfully shameless in his work. 1/2

We had so many good times together. He was my friend, I will never forget him. 2/2 pic.twitter.com/9xfPj88x8b

“Ashes to ashes, dust to stardust. Your brilliance inspired us all. Goodbye Starman.”

“Good-bye, David Bowie. You are now among #Heroes. Thank you for helping to bring down the #wall.”

“The Rolling Stones are shocked and deeply saddened to hear of the death of our dear friend David Bowie. As well as being a wonderful and kind man, he was an extraordinary artist, and a true original.”

“Im Devastated! This great Artist changed my life! First concert i ever saw in Detroit!”

“David’s friendship was the light of my life. I never met such a brilliant person. He was the best there is.”

I wish he could have stayed on earth longer. RIP #DavidBowie pic.twitter.com/jnYLaaootw

“I remember sitting listening to his songs endlessly in the ’70s particularly and always really relishing what he was, what he did, the impact he had,” Welby said. “Extraordinary person.”

“Genius is an over-used word but I think musically, creatively, artistically David Bowie was a genius.”

“For someone of my age he provided a lot of the soundtrack of our lives.”

“From the time I saw his Ziggy Stardust concert as a student, I thought he was a brilliant artist and an exciting and interesting human being.”

“No-one in our age has better deserved to be called a genius.”

“David Bowie was one of my most important inspirations, so fearless, so creative, he gave us magic for a lifetime.”

“David Bowie was a true innovator, a true creative. May he rest in peace.”

I feel like a little piece of my childhood just died :( #DavidBowie