Video: 'Please' and 'thank you' at the Umbrella Revolution

Maclean's correspondent Jonathon Gatehouse reports from Hong Kong where 50,000 protesters are packed into a tiny quadrant.

Jonathon Gatehouse is in Hong Kong on assignment for @MacleansMag. Follow along: @JonGatehouse

What is immediately striking about the Occupy Central pro-democracy protests in Hong Kong is the level of organization and politeness. If this is a revolution, it’s about the nicest one in history.

With more than 50,000 activists packed into a tiny quadrant of the city’s Admiralty district the potential for chaos is immense. But volunteer marshals keep pedestrian traffic flowing, others help people up and down the makeshift ladders they’ve built over concrete highway dividers, and there are even long, orderly queues for the nearby public restrooms. The signs that decorate the walls of office buildings and the sides of concrete overpasses are almost uniformly pleasant. “Keep Calm and Love Hong Kong,” is a popular one. “People say I’m a Dreamer,” reads a large yellow invocation of John Lennon. “Do U Hear the People Sing?” asks another. They clap pleasantly for speeches, pick-up the trash on the ground, and have organized stations to provide water, raincoats, and the umbrellas that can always be pressed into double-duty against police pepper spray.

The crowd is overwhelmingly young and seemingly unafraid. After Friday night’s organized attacks against Occupy protesters across the harbour in  Mong Kok—attributed to members of organized crime Triads, enjoying at least the implicit support of police and the government—there was a great deal of apprehension in Central Hong Kong. But the protesters came out in force all the same. And stayed late into the night, singing songs about love and peace.

Anthony Tsang and his girlfriend, Irene Tsui, both Communications students and Hong Kong’s Polytechnic University, were sitting cross-legged on the ashphalt, reading a book about Nelson Mandela. Both are committed to non-violent resistance, but have no illusions about what they will do when the police finally do come. “Run away,” says Tsang. Still, the greater cause is worth putting themselves in harm’s way. “It feels like the government is kind of corrupt,” says Tsui. “I feel angry.”

“When I was younger, democracy wasn’t that important to me,” says Tsang, just 20. “But now I see why it’s important. China has forbidden so many people from expressing themselves. But we’re Hong Kongers. We’re different. We don’t want our rights to be taken away.” 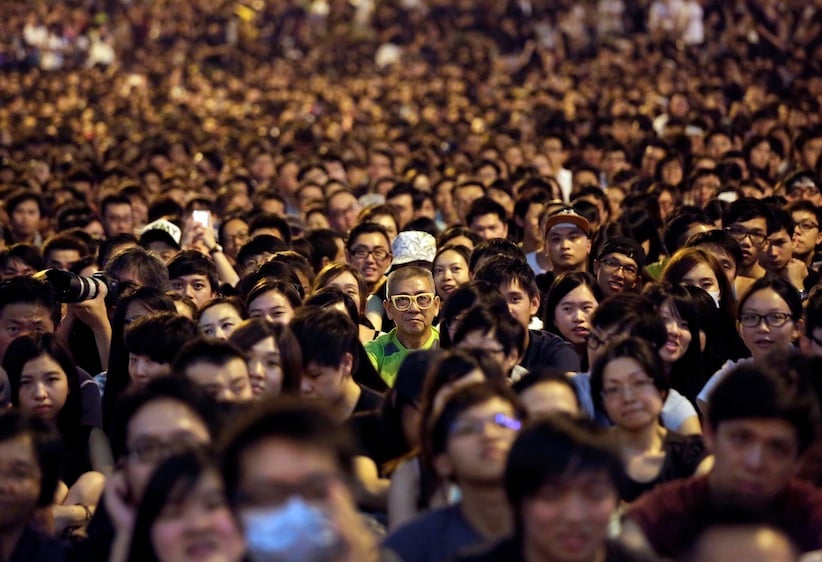 Related post:
What you need to know about the protest in Hong Kong

This is the scene right now at #HongKong democracy protests. #macleans pic.twitter.com/pxn6NcVdNu

Settling in for a long night at #HongKong protests # macleans pic.twitter.com/1J9VMQ6Nze

Protesters sit outside Chief Executive's office in #HongKong Police said to be on way to clear them out #macleans pic.twitter.com/VbSyBlvMym