PM's visit with Pope focuses on Ukraine, not residential schools 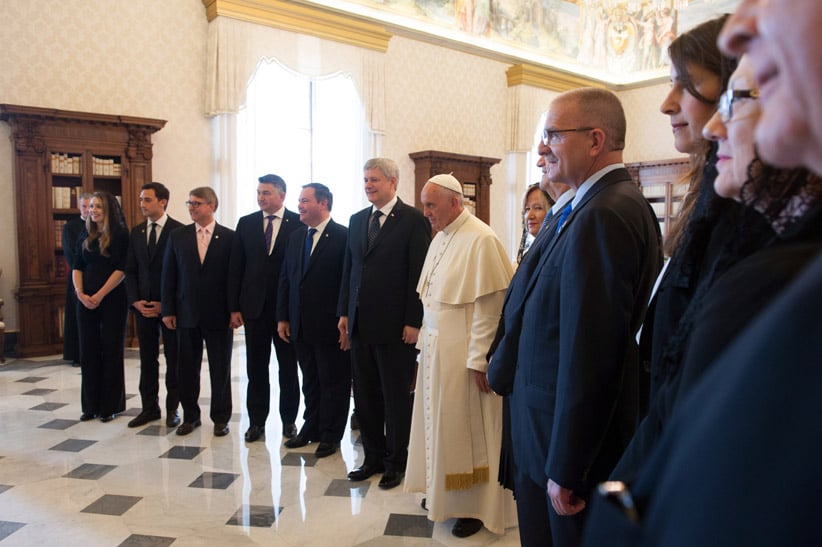 VATICAN CITY, Italy – Prime Minister Stephen Harper raised the troubling findings of the residential schools commission Thursday during an unusually brief meeting with Pope Francis, but stopped short of inviting him to Canada to apologize.

Instead, Harper referred to a letter sent earlier in the week to the Vatican by his aboriginal affairs minister that merely notified the Holy See of the commission.

“Prime Minister Harper also drew attention to the letter sent by Minister (Bernard) Valcourt to the Holy See regarding the Truth and Reconciliation Commission,” Harper’s office said without elaborating.

Harper’s spokesman did not respond to a request for clarification.

Harper’s 10-minute meeting with the Pope Francis was surprisingly short by Vatican standards. Russian President Vladimir Putin had a nearly 50-minute private audience with the pontiff a day earlier.

A separate readout from the Vatican did not mention the residential schools issue among the topics discussed with Harper.

Harper instead choose to pursue the theme that has dominated six-day trip to Europe — his condemnation of Putin.

Harper went into the meeting facing calls to use the occasion to secure a papal apology for the church’s role in Canada’s residential school legacy.

Perry Bellegarde, the national chief of the Assembly of First Nations, had said the meeting would be a “prime opportunity” for the prime minister to raise the issue.

The Truth and Reconciliation Commission, which spoke to thousands of residential school students and documented their experiences, issued 94 recommendations last week that included a call for a papal apology on Canadian soil.

Bellegarde said a directly apology from the Pope “would be huge” and would help bring closure to those who suffered atrocities and abuses at the schools, many of which were run by the Roman Catholic Church.

In April 2009, then-AFN national chief Phil Fontaine along with four aboriginal leaders and a delegation from Canada’s Catholic Church had an audience with Pope Benedict in Rome, which produced a communique of sympathy from the Vatican.

Harper’s visit to the Vatican came on the final day of his six-country European tour, and exactly seven years after the prime minister issued his own apology in the House of Commons to residential school survivors.

Canadian officials said that because Putin visited Francis the day before Harper, the prime minister wanted to raise the topic.

“Prime Minister Harper addressed the situation in Ukraine and his deep concern with Vladimir Putin’s aggression, occupation and violence in Ukraine,” said Harper’s office. Harper also raised the plight of religious minorities at the hands of Islamic militants.

The U.S. called on the to Vatican this week to step up its concern about Ukraine in Francis’ meeting with Putin. It was the Russian leader’s second meeting with Francis since 2013.

A Vatican spokesperson said the Ukraine and Middle East crises were big topics of discussion, but the question of assigning blame to Russia did not arise.

Harper was at the Vatican for slightly less than an hour, but his actual meeting with the Pope lasted only a fraction of that time. He also met with Archbishop Paul Gallagher, the Vatican’s secretary for relations with states.

Harper was visible to reporters only briefly on three occasions when short, frenetic photo ops took place. The prime minister did not speak nor did he take questions from Canadian media travelling with them on the final day of his travel

Harper ended his trip with a call to Italian Prime Minister Matteo Renzi, who has a much closer relationship with Putin than Harper, who has isolated him.

Renzi also hosted Putin, as they cordially toured the Russian pavilion at the world’s fair. Putin breached protocol by arriving an hour and 20 minutes late for his meeting with the Pope, who encouraged him to make “sincere” efforts to bring peace to Ukraine.

Harper visited Ukraine and Poland on this trip, as well as attending the G7 leaders summit in Germany, and was to return to Canada on Thursday evening.

— with files from Kristy Kirkup in Ottawa