Retired pope thanks reigning pope for his focus on mercy 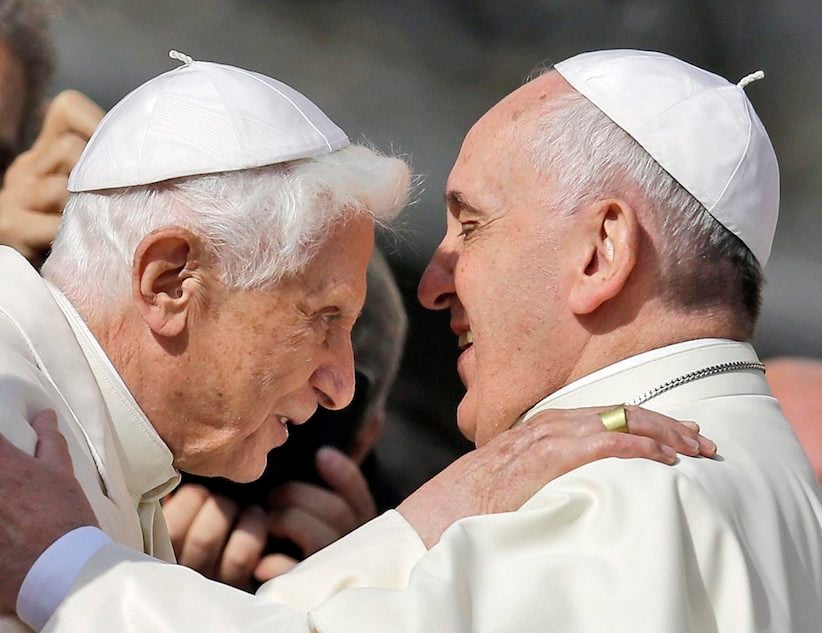 VATICAN CITY — Retired Pope Benedict XVI endorsed Pope Francis’ mercy-filled ministry Tuesday during an unprecedented Vatican ceremony featuring a reigning pope honouring a retired one on the 65th anniversary of his ordination as a priest.

The ceremony in the Clementine Hall of the Apostolic Palace served in part to show continuity from Benedict to Francis amid continued nostalgia from some conservatives for Benedict’s tradition-minded papacy.

Francis had invited the entire Vatican Curia, or bureaucracy, to celebrate Benedict’s anniversary, and prelates turned out in force for the rare occasion of being able to greet each man in white.

While Francis presided, it was Benedict who stole the show with an off-the-cuff, mini-theology lesson sprinkled with Greek and Latin that showed that the mind of the German theologian is still going strong at 89.

In it, Benedict thanked Francis for letting him live out his final years in the beauty of the Vatican gardens, where he said he felt “protected.”

“Thank you, Holy Father, for your goodness, which from the first moment of your election has struck every day of my life,” Benedict said, speaking without notes. “We hope that you can go forward with all of us on this path of divine mercy, showing us the path of Jesus toward God.”

Benedict’s vote of confidence may help quell conservative criticism of the current pope’s loose theology, lack of attention to liturgy and emphasis on mercy over morals.

Francis has recently dismissed new questions about the implications of Benedict’s resignation by insisting that there is only one pope — himself — and that Benedict had pledged his obedience to him on the day he resigned.

He told reporters this weekend he felt that Benedict “had my back” and was continuing to help the church through his prayers. He added he had heard that Benedict had even chastised some nostalgic faithful who were complaining about the “new pope.”

During Tuesday’s ceremony, Francis entered the Clementine Hall to applause from the gathered cardinals and went straight to embrace Benedict, who stood up and removed his white skullcap in a sign of deference. They embraced several more times during the ceremony.

Benedict listened intently as Francis addressed him — as “Your Holiness” — lauding his 65 years of service to the church and saying his decision to retire to a life of quiet prayer to a small monastery in the Vatican gardens was a very “Franciscan” thing to do.

The monastery “is nothing like those forgotten corners where today’s ‘throwaway culture’ tends to put those who lose their strength with age,” Francis said. “Quite the contrary!”

The monastery, the pope said, is similar to the Porzinuncola, the small chapel in Assisi where his namesake St. Francis founded his order and then spent his dying days.