Praise Trump or die: How to get the Medal of Freedom in today's America

Former NFLer Alan Page was the exception proving the rule, as Trump honoured Elvis, Babe Ruth and a hundred-million donor to Republicans 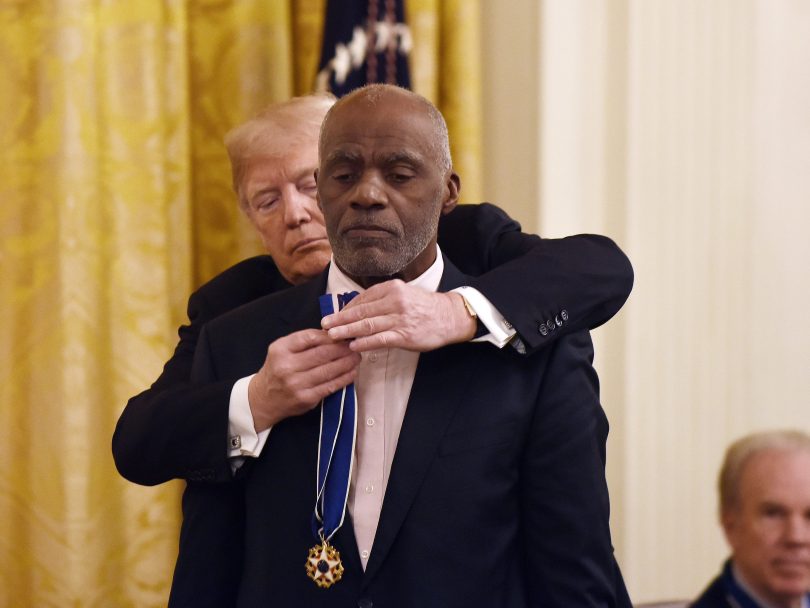 In the East Room of the White House were one King, one Sultan, one Purple People Eater, one once-potential Veep, one upright Mormon, one Constitutionalist, and one Donald; seven men in all, three of them ghosts, plus one very, very rich woman.

Here was the president of the United States on Friday afternoon, bestowing the Medal of Freedom as only he can and only he could, glowing self-reverentially in the presence of icons living and deceased, the difference being that the posthumous recipients no longer could say of Donald Trump, as one of the day’s honorees sneered not long ago, “You can talk to him forever and you’d probably get more reaction out of the paint on the wall.”

But gift him US$113 million, as one of Friday’s recipients did in 2016, and you’ll probably get the Presidential Medal of Freedom. Yet is it not engraved in stone at the Korean War Veterans Memorial that “Freedom is not free?”

And accuse not Donald Trump of partisan favoritism—Babe Ruth, who received the highest American civilian distinction on Friday, only 70 years after he died, was asked if he would support Republican Herbert Hoover in the 1928 presidential election, and the Sultan of Swat replied, “Hell no, I’m a Democrat!”

In a capital and at a time when nothing is normal—when a new, raw, indecorous definition of normalcy is being sculpted in the Oval Office every day—no one was surprised when, in homage to Elvis Presley, Trump deejayed a brief sample of the song he sings to himself in the White House mirror each morning:

“How Great Thou Art.”

“That was my idea,” said Donald Trump to the throng in the gilded ballroom, departing from the words on his large-print prompter. And there was this:

“He liked me right from the beginning and that’s why I like him,” the president said of Sen. Orrin Hatch, revealing everything about Trump in a single sound bite.

Or go to court to get it back, as CNN’s Jim Acosta did after having his press pass revoked for badgering the president at a riotous news conference a week earlier, and find that the rule of law still prevails beyond the White House gates, even when the servant of justice is a Trump appointee.

“Let’s get back to work,” Acosta told the scrum who waited in the West Wing driveway on Friday afternoon, his audacity redeemed by that pesky old First Amendment.

“People have to behave,” Donald Trump tried to have us believe, waxing courtly for the pool cameras when asked about Acosta, the sudden patron saint of courtesy. And there was more news: he had just sent answers to certain questions to Special Counsel Robert Mueller, he said.

“They were my answers.  I don’t need lawyers to do that,” the president affirmed.

Back to the ceremonial trappings. For more than half a century, the Presidential Medal has been conferred on worthy men and women whose careers ranged from diplomacy and war and moonwalking to ballet and baseball and the blues. It is one of this country’s paramount honours, and Donald Trump had ignored it until now.

Then, on Friday, in addition to the staunch Utahan Hatch and baseball’s great Bambino and the adored, addled King of Rock and Roll, Trump chose Republican benefactor Dr. Miriam Adelson, the late Supreme Court Associate Justice and implacable originalist Antonin Scalia, Navy and Dallas Cowboys quarterback Roger Staubach (who received one vote for Vice President at the Republican National Convention in 1976), and Minnesota Supreme Court Justice Alan Page (who, as one of the Minnesota Vikings’ carnivorous Purple People Eaters defensive line, sacked the same sainted Staubach twice in an NFL playoff game on Christmas Day, 1971).

“I would be inclined not to want to talk to him,” Page told a Minnesota newspaper early in the Trump presidency. “He’s my age, roughly. He is who he is. He knows what he’s doing. This is who he is.”

“My vision of the world is the same today as it was a year ago, and the year before that.,” Page said last week. “But this medal, this honour is far more important than my personal beliefs, my personal likes and dislikes. The politics of it, that’s something that at this point is not important to me. What’s important is trying to make this world a better place and literally that is my focus.”

So Alan Page sat immobile in the East Room, awaiting the snap, until the president noted that Page’s wife had passed away in October, and the big man wiped away a tear.

The honourees did not speak in public on Friday but their records—literally, in Elvis’s case, on the East Room loudspeakers—preceded them. It was Presley who arrived, open-necked and amphetamine-eyed, at the White House gates at six-thirty one morning in 1970 and asked to see Richard Nixon.

Nixon had been primed for the King’s appearance by an aide named Egil Krogh (who later would go to prison for his role as head of the “White House plumbers” in the Watergate scandal). Krogh had noted the drug-fuelled deaths of Jimi Hendrix and Janis Joplin in a note to his boss and had recommended Elvis as an antidote to such dissolution, proclaiming that “if our youth are going to emulate the rock music stars, from now on let those stars affirm their conviction that true and lasting talent is a result of self-motivation and discipline and not artificial chemical euphoria.”

“That’s quite an outfit you’ve got on, Elvis,” Nixon told the monarch.

“Mister President,” said the King, “you’ve got your show to run and I’ve got mine.” 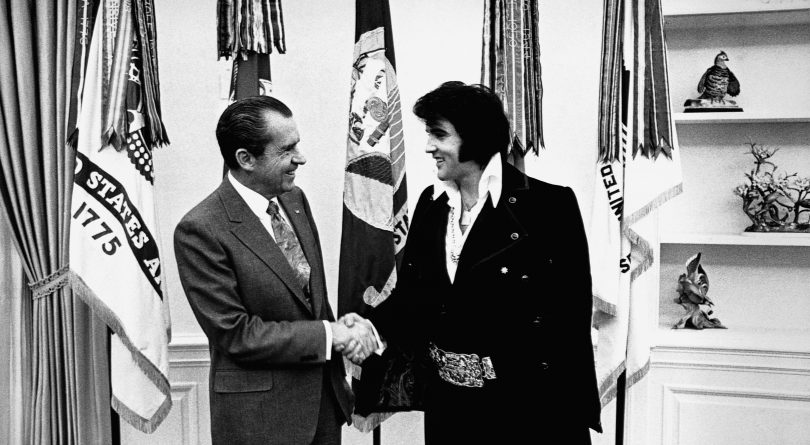 Nixon and Elvis at the White House in December 1970 (Photo: CORBIS/Corbis via Getty Images)

It was Roger Staubach who, when Ronald Reagan was elected president in 1980, told The New York Times, ”For the next four years, I don’t think I have to worry about being audited by the I.R.S.”

It was Babe Ruth, when teased by sports writers about his salary being higher than that of President Hoover, replied, “I had a better year.”

Every U.S. leader from John Kennedy through Bill Clinton—except for the disgraced Nixon, of course—has been awarded the Medal of Freedom by one of his successors. Partisanship, parochialism, politics; all are erasable in theory, under the portrait of George Washington, for an hour at least. So Senator Amy Klobuchar sat in the same room as Justice Brett Kavanaugh, and Alan Page shook hands with Donald Trump. Left unknown was whether the same bonhomie will prevail five years from now, when Donald Trump bows at the waist to receive his award from Beto O’Rourke, just after Robert Mueller accepts his.