The case of Eric Garner has stirred a national conversation about race, police training and the grand jury process.

By The Associated Press December 4, 2014 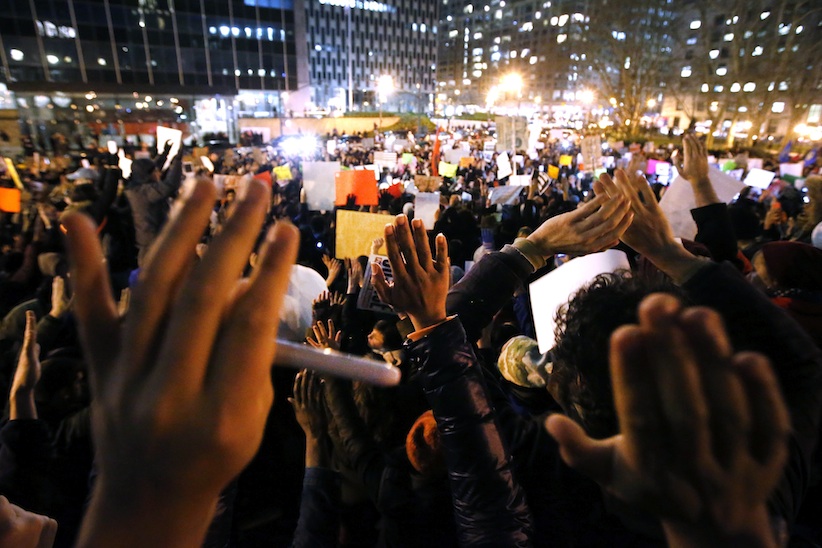 Protesters in New York rally against a grand jury’s decision not to indict the police officer involved in the death of Eric Garner. (Jason DeCrow, AP Photo)

NEW YORK — Civil rights leaders Thursday decried the grand jury decision not to charge a white New York City police officer in the chokehold death of a black man and announced plans for a march and a summit on racial justice in Washington later this month.

The case of Eric Garner — combined with the decision by a grand jury last week not to charge the white officer who shot and killed unarmed black 18-year-old Michael Brown in Ferguson, Missouri — stirred a national conversation about race, police training and the grand jury process. Unlike Brown’s shooting, Garner’s arrest was captured on videotape.

A day after protests erupted in New York over the decision not to charge a white officer in the death of a black man, civil rights leaders pinned their hopes on a federal investigation. Demonstrators protested for a second night in New York and turned out in such cities as Denver, Detroit and Minneapolis. And politicians and others talked about better police training, body cameras and changes in the grand jury process to restore faith in the legal system.

Amid the tensions, U.S. Attorney General Eric Holder presented the results of an investigation into police in the Ohio city of Cleveland, prompted by several highly publicized police encounters, some of them deadly. The Justice Department report said Cleveland police use excessive and unnecessary force far too often, are poorly trained in tactics and firearm use and endanger the public and their fellow officers with their recklessness.

The results of the investigation came just one week after hundreds of people blocked a Cleveland freeway to protest the Garner and Brown killings, along with the fatal shooting of a black 12-year-old boy by a white officer outside a Cleveland recreation centre. Police said the officer thought the boy was holding a firearm, but he actually had an airsoft gun that shoots nonlethal plastic pellets.

In New York, National Urban League President Marc Morial said the lack of an indictment in Garner’s death was “a travesty of justice.”

About 20 civil rights leaders met behind closed doors Thursday at the New York City headquarters of Rev. Al Sharpton’s National Action Network. Sharpton, one of the country’s most outspoken civil rights activists, said a civil rights summit will be held following a Dec. 13 march in Washington.

Garner, 43, died as officers were attempting to arrest him for selling untaxed cigarettes on the street. The video, shot by an onlooker and widely viewed on the Internet, showed Garner telling a group of police officers to leave him alone as they tried to arrest him. Officer Daniel Pantaleo responded by wrapping his arm around Garner’s neck in what appeared to be a chokehold, which is banned under the New York Police Department’s policy.

The heavyset Garner, who had asthma, was heard repeatedly gasping, “I can’t breathe!” He later died at a hospital.

Thousands of people protested in New York, chanting and blocking traffic, after the grand jury decided not to bring charges against Pantaleo. The decision Wednesday came a week after a Missouri grand jury made a similar ruling in Brown’s case.

Pantaleo’s lawyer and police union officials argued that the grand jury got it right, saying that the officer used an authorized takedown move — not a banned chokehold — against a man who was resisting arrest. And they said Garner’s poor health was the main cause of his death. The medical examiner ruled that the chokehold contributed to the death.

Pantaleo’s attorney, Stuart London, also expressed confidence that his client won’t face federal prosecution, adding that Pantaleo had heard Garner say, “I can’t breathe.” But, London said, Pantaleo believed that once he got Garner down on the ground and put him on his side, he would be revived by paramedics.

On Thursday morning, yet another case returned to the mix: A white former police chief in South Carolina was charged with murder in the 2011 shooting death of an unarmed black man after an argument at a town hall meeting. The officer’s lawyer accused prosecutors of taking advantage of national outrage toward police to get the indictment.

And in Los Angeles, police Chief Charlie Beck said Thursday that three officer violated deadly-force rules when they shot an unarmed man last year on live television after a high-speed chase. The chief will now have to decide what punishment, if any, to give the officers who have been relieved of duty since the December 2013 shooting.

Some legal experts said the Garner case, like the one in Ferguson, raised concerns about the influence local prosecutors have over the process of charging the police officers they work with on a daily basis.

Ekow N. Yankah, a professor at New York’s Cardozo School of Law, said: “It is hard to understand how a jury doesn’t see any probable cause that a crime has been committed or is being committed when looking at that video, especially.”

Garner’s widow, Esaw, said she had no faith in the local prosecutors.

“As far as the police and the (District Attorney), there was no sincerity from Day One,” she said on the “Today” show.

Holder, the attorney general, has said federal prosecutors will conduct their own investigation of Garner’s death. The New York Police Department will also conduct an internal investigation into the incident to determine whether Pantaleo violated policy, and Commissioner William Bratton said interviews would begin Friday.

In Phoenix, protesters planned a vigil and march Thursday night against a separate fatal shooting that involved another black, unarmed drug suspect by a white police officer.