The stories behind five photos from the Boston Marathon bombings

Putting names to the now-recognizable faces 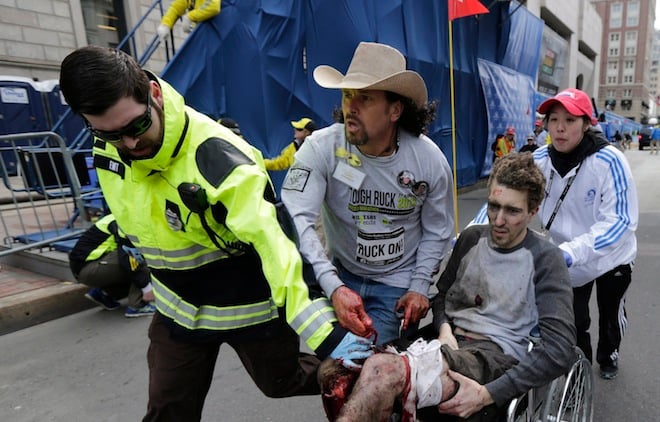 Carlos Arredondo, above in the cowboy hat, was captured in a number of photographs helping victims, many of whom had lost limbs.

He had been in the bleachers cheering on a team of five from Maine running for “Mainers” who’d died overseas fighting — including his son Alexander Arredondo.

After the blasts, Arredondo–with his friend Jon Mixon, a Vietnam War veteran, leapt from the bleachers to help. “When we got over there, it was just a pile of bodies—people with legs missing,” Mixon told The Portland Press Herald. “It was absolutely like a war scene. This was worse, because it was all innocent people, just defenseless. They were just lying in a pile, gunpowder all over them, burnt.”

Arredondo vaulted over a snow fence to get to the injured and used his clothes and a towel as a tourniquet. He and Mixon managed to get one spectator, who was missing both legs, into a wheelchair. “I kept talking to him. I kept saying, ‘Stay with me, stay with me,’ ” Arredondo told the Press Herald.

Several publications have pointed out that the 52-year-old is also a famed peace activist and protestor of the Iraqi war, which claimed the life of his son. In a 2007 interview with the New York Times, Arredondo recounts learning the news:

Mr. Arredondo said he “lost it.” He ran to his garage and grabbed a gallon of gasoline and a propane torch.

He took a sledgehammer and smashed the government van’s windshield and hopped inside. As the officers tried to calm him, Mr. Arredondo doused himself and the van with gasoline and lit the torch.

There was an explosion, and the officers dragged Mr. Arredondo to safety. He suffered second- and third-degree burns over 20 per cent of his body.

“I went to my son’s funeral on a stretcher,” he said.

“That loss grew exponentially four years later, when Arredondo’s surviving son killed himself at age 24, partly out of grief from losing his older brother,” reports Gawker. “Now, Arredondo has again found himself in the midst of tragedy and again responded with resiliency and courage.”

Update: The man in the wheelchair beside Arredondo has been identified as Jeffrey Bauman, of Chelmsford, Mass., The Lowell Sun reports.  Bauman’s father wrote on his son’s Facebook page that doctors had amputated both of his son’s legs because of vascular and bone damage. The 27-year-old was waiting to watch his girlfriend cross the finish line when the explosions struck him down. 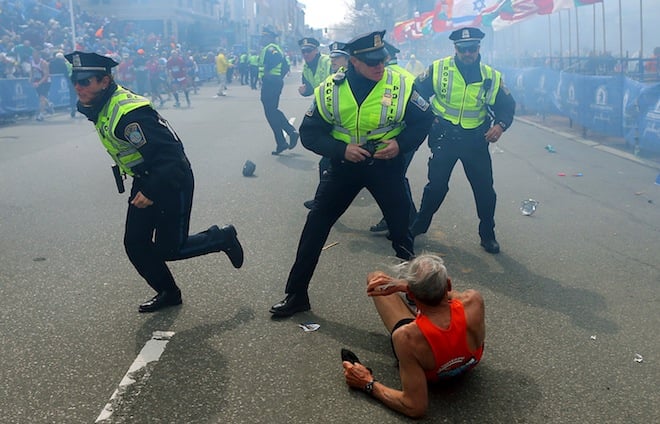 Bill Iffrig can be seen in a number of videos being knocked over by the force of the second blast that went off near the finish line.

The 78-year-old runner, who has participated in 45 marathons, including three in Boston, spoke to Piers Morgan on CNN on Monday evening telling him, “I got down to within 15 feet of the finishing apron and just tremendous explosion, sounded like a bomb went off right next to me…the shock waves just hit my whole body and my legs just started jittering around. I knew I was going down and so I ended up down on the blacktop.”

Iffrig suffered only minor injuries, and was able to walk to the finish line. 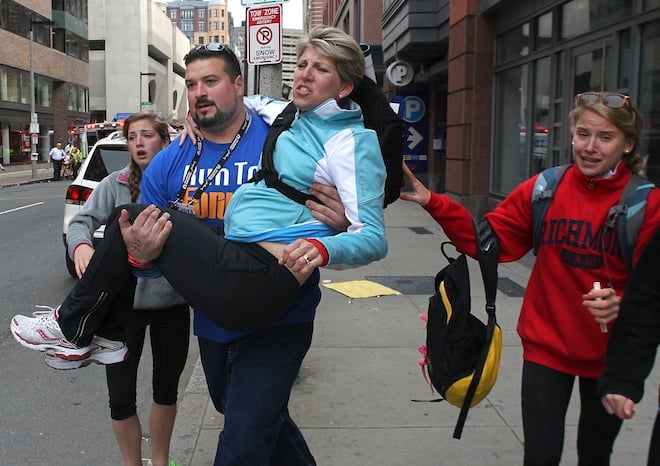 Former Patriots offensive linebacker Joe Andruzzi was at the marathon to support a team raising money for his charity, which provides financial assistance to cancer patients and their families and funding for pediatric brain cancer research, reports the The Boston Globe.

In the aftermath of the explosions, he helped the injured. (Boston Globe photographer captured Andruzzi carrying an unidentified injured woman.) Andruzzi has no interest in discussing his heroic actions, though released a statement to say:

“Marathon Monday should be about uplifting stories, personal challenges and fundraising milestones, but today’s bombings irrevocably changed that.

“While I appreciate the interest in hearing our perspective on today’s horrific events, the spotlight should remain firmly on the countless individuals—first responders, medics, EMTs, runners who crossed the finish line and kept on running straight to give blood, and the countless civilians who did whatever they could to save lives.

“They were the true heroes. Our thoughts prayers go out to all those affected by this senseless tragedy.”

Andruzzi, who played for the Patriots between 2000 and 2004, has three brothers who are New York City firefighters and were in action during the attacks on Sept. 11, reports the The Boston Globe. 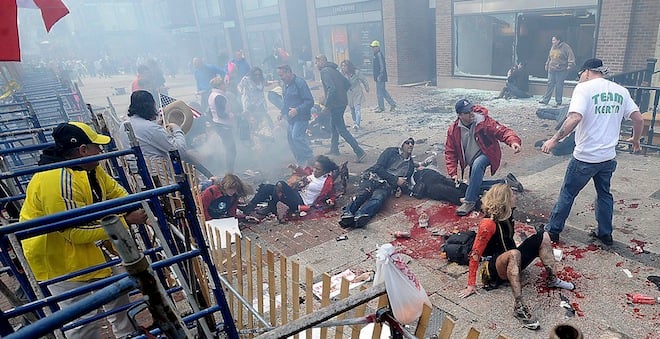 Nicole Gross can be seen in the bottom-right, moments after the explosion (Ken McGagh/AP/MetroWest Daily News)

Fitness instructor and former University of Tennessee swimmer and Nicole Gross was waiting near the finish line with her husband Michael Gross and her sister Erika Brannock. They were there to cheer on Nicole and Erika’s mother, Carol Downing, who was running in the race, reports The Charlotte Observer.

Nicole (seen above, just moments after the explosion, which broke both her leg and ankle), her husband and her sister were all injured. The Observer reports that Nicole went into surgery Tuesday and her sister Brannock, a preschool teacher, is in intensive care.  Michael Gross suffered burns and told the paper that “their health and recovery is my only focus.”

Nicole and Erika’s mother was unharmed. 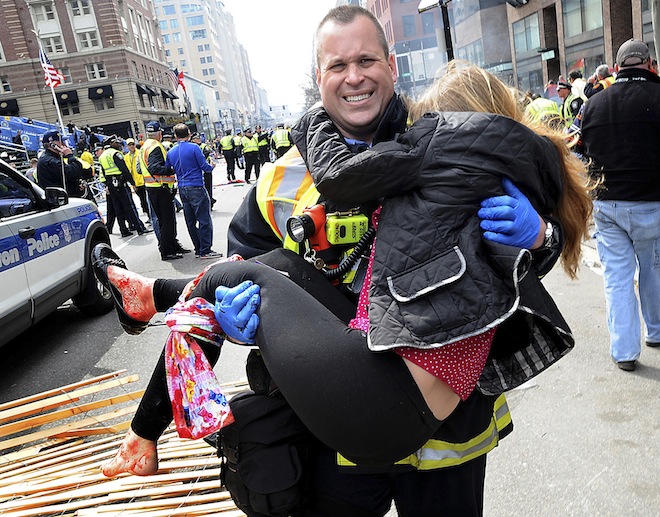 Plourde’s parents were watching television when they saw the image of their son on the screen, reports The Times Union, a paper in Albany, New York, where Plourde grew up.

“That is quite a picture because of the fear, action and the look on Jim’s face,” said his mother, Janet. “It is a very grim look.”

She and her husband received calls all day Monday with friends and family–who had also seen the photo–eager to know if Plourde was safe. (He was.)