Q & A: Garrett Graff on Trump, nukes and emergency planning

The U.S. government has an intricate plan to survive a nuclear war. In the Trump era, the blueprint might need an update 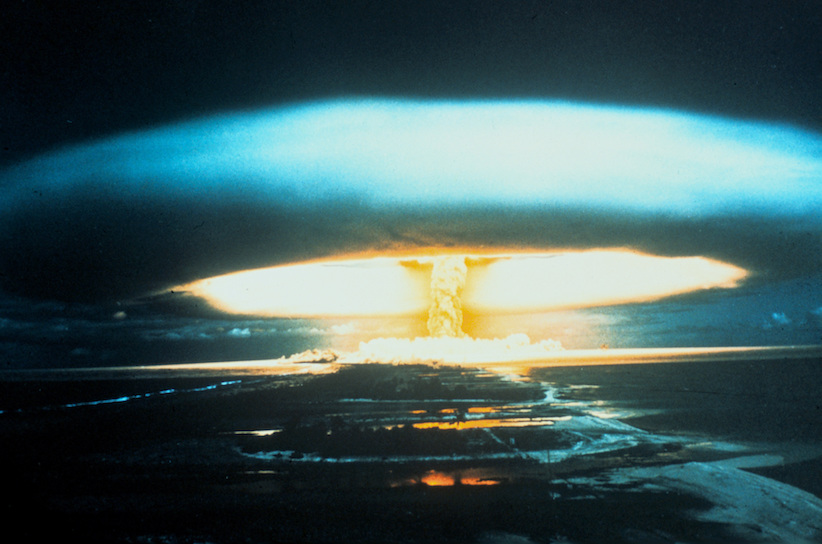 In May, American journalist Garrett Graff released his book Raven Rock: The Story of the U.S. Government’s Secret Plan to Save Itself—While The Rest of Us Die. Engagingly written and full of mind-boggling facts about plans laid by the American state’s plans during the Cold War to continue operating after a nuclear attack, Raven Rock turned Graff into a go-to commentator when Donald Trump and Kim Jong Un began their war of words earlier in August. With nuclear anxieties no longer seeming safely in the past, Graff isn’t exactly an optimist, but he sees opportunity within the crisis.

Q: In the crisis-a-week Trump presidency, the focus is currently on Charlottesville and white supremacy, but you think North Korea will return.

A: Absolutely. Its nuclear ambitions have bedeviled U.S. presidents for decades, and the situation is getting worse. Duck and cover is back.

Q: I see you live in Vermont. Is that because it’s a good place to be during a nuclear, uh, incident? I’m thinking of those 1950s rural real estate ads you quote: “Small farm for sale, out of atomic bomb range.”

A: I’m from Vermont actually, and there’s a large air force base just on the other side of Lake Champlain. So: no.

Q: Raven Rock is a fascinating take on what you call the “how” of nuclear survival—how the U.S. planned to continue on as a constitutional entity. It also explores all the things that this massive effort created: the interstate highway system, the Internet and, on the other side of things, the surveillance state. How important was the Cold War as a spur to modernity?

A: When you begin to look at the world in which we live, so much of it is the result of planning for a nuclear war that never happened. Digitalization of war gives you the digitalization of civilization.

Q: You write about these complex lines of succession established by war planners, and not just for the presidency. The bureaucrat who runs Energy Department operations in South Carolina is 18th in line to be energy secretary and therefore has to start every day by posting an exact itinerary for the next 24 hours. Is that still part of the job?

A: It’s true across the board. There are hundreds of people who do that on a daily basis and are monitored 24/7, or who arrive at the bunkers at Raven Rock [for military] or Mount Weather [for civilians] and work there as their normal day jobs. As we’re talking, a presidential doomsday plane is sitting on a runway in Omaha, engines running, ready to launch for a rendezvous with the president within 12 to 15 minutes after an alert. We have this whole system that just runs on out of sight, whether we’re worried about North Korea on any given Tuesday or not.

Q: Out of sight and also out of mind.

A: Most of us just go about our lives without any attention to it.

Q: In any given White House there are senior people with a little laminated card that tells them what’s going to happen to them in an emergency. And others have no idea. President Bill Clinton’s White House communications director George Stephanopoulos showed West Wing producer Aaron Sorkin his card, but when Sorkin created an episode that featured the cards, Dee Dee Myers, Clinton’s press secretary, took him aside and said the cards didn’t exist. She didn’t rate one, and didn’t know that others had them.

A: They’re called coop cards on Capitol Hill, and they could affect the lives of thousands of people in Washington, many of whom carry them without really thinking much about it. But there are, today, blue and gold Air Force helicopters flying over Washington that are practicing to evacuate high-level officials if they need to.

Q: How startling did you find this stuff as you went through the research: the cards, the lines of succession, the 100 secured sites near Washington, the way the Post Office would be in charge of picking up the dead and the National Park Service tasked with running refugee camps?

A: These programs were something that I picked up now and again when I was covering national security in Washington. I would talk to people who had been evacuated on September 11 or people who were part of the plans during the Bush and Obama years. But until I really started looking, I had no understanding up the sheer scale and scope, the billions and billions of dollars spent for decades, and the incredible details, right down to what order to save treasures from the National Gallery and other institutions. We kept trucks sitting for decades at the National Gallery and at the National Archives, fully gassed up and ready to go.

Q:  In retrospect, this makes 9/11 a bit more explicable in terms of response, which seemed over the top in some ways, like closing all air space for so long. The response was derived from a set of plans that dealt with a total attack.

A: Right. What we have now for any emergency is calibrated to deal with the absolute worst-case scenario.

Q: 9/11 also illustrated a fatal flaw: rescuing the leadership at the very moment when you need leadership. It ended up with Bush flying around for hours and getting lambasted for it.

A: It was always clear you can either be secure or you can be in command during an emergency. You can’t do both. Anything you do to be in control is a compromise of security and vice versa. There’s always has been a very delicate balancing act between the role of the head of state and the role of the president as the commander in chief.

Q: And all of that now takes us to the part that terrifies quite a few of us: because of the concern during the Cold War of being struck by a bolt out of the blue (or a BOOB), the president alone has authority over a nuclear strike. Only he or she gets to decide; currently that means one Donald Trump.

A: That’s the reality of America’s nuclear launch authority. It’s meant to be instant and decisive. Over the past six or seven decades we have stripped away anything that could possibly slow down a president’s response to a surprise nuclear threat. In Cold War scenarios he had 15 minutes to react, and literally four minutes after he gives a valid launch order, the first ICBMs will leave their silos in the Great Plains. Yet that’s not the geopolitical reality that we face today. It dates to pre-submarine days, when planners worried the missiles would be destroyed in their pads. Subs solved that problem. Today, even if Russia—without any notice or any warning from U.S. intelligence whatsoever—managed to successfully launch every single one of their deployed nuclear weapons in a surprise attack on the United States, we would still be able to destroy every major city, industrial centre and government leadership centre in Russia, using our invulnerable nuclear deterrent of the ICBM missile submarines. And vice versa: Even if the United States were able to launch an absolutely perfect surprise attack on it, Russia would still have enough submarines to destroy every city in the United States over about 150,000 people.

Q: So the strategy doesn’t work even there?

A: And that’s the absolute end of the spectrum! Much more likely in today’s geopolitical environment is a small handful of North Korean missiles impacting United States territory. Which would be absolutely devastating and still involve the deaths of hundreds of thousands—if not millions—of people. But it would not in any way affect the retaliatory capacity of the United States. I think there is a great opportunity for us to revisit those Cold War protocols and think about whether we should have a second voice in the system.

Q: Everything else in the nuclear chain has two-man execution.

A: Everything is guided by the two-man rule—nuclear weapons facilities are all known as “no-lone” zones. The one exception to that is the president of the United States, who can launch anything nuclear that he wants at any time.

Q: You think your country should carefully consider the president’s powers now that the whole pattern of nuclear war has changed.

A: Donald Trump has brought this issue to the fore right now. This is a good reform for us to make regardless of who the U.S president is, and a time when—thanks to Trump—the country might be open to it. There should not be any single human being on the planet who can end life as we know it for all other human beings.