Q&A: Oleksiy Matsuka on the failed launch of a new Ukraine

The investigative journalist talks about the future of the Donbass region, the need for reform, and why Petro Poroshenko isn't the answer 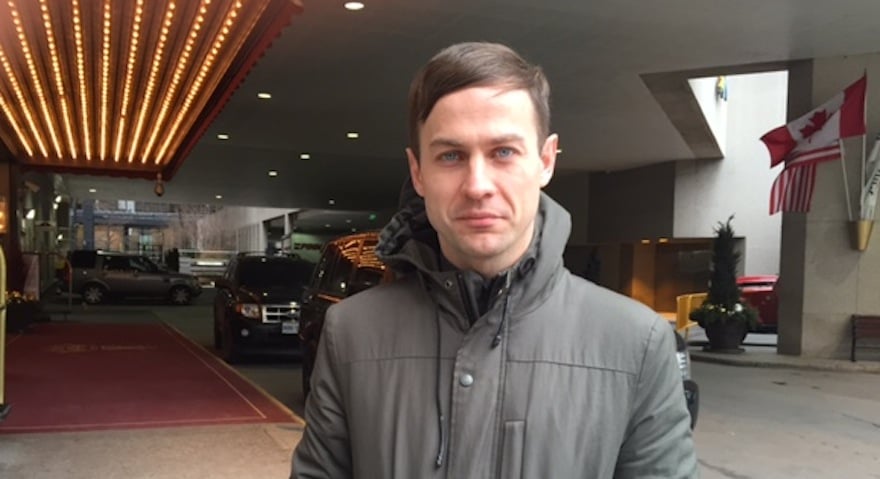 While the West has been distracted by headlines about Russia’s incursion into Ukraine and its annexation of Crimea, it can be easy for us to forget that Ukraine is actually fighting a multi-front war, with its own deep-rooted domestic concerns, from political corruption and the influence of the oligarchy in its political sphere, to profound economic disparity and supply problems with energy. Investigative journalist Oleksiy Matsuka hasn’t forgotten: First, as a reporter/editor with the news site Novosti Donbassa, then later with Donetskaya Pravda, he has been exposing corruption and abuses of authority in the country. It is dangerous work. In 2011, his apartment was set ablaze after he published stories about the embezzlement of public funds. Terrifyingly, the perpetrator left a funeral wreath. In April, his car was set on fire. But his reportage continued.

Maclean’s spoke to Matsuka through a translator while he was in Toronto for the Canadian Journalists for Free Expression’s annual gala, where he was recognized on Dec. 3 for his work with an International Press Freedom Award.

Q: Why did you want to do investigative journalism in the first place?

That was my calling. That is what I chose as my profession. I studied political science in university and philosophy. When I studied that, I noticed that the journalists were dependent; there was no freedom of speech. That’s why I wanted to do journalism.

I was investigating the corruption schemes of the [former president Viktor] Yanukovych regime in that region, and we found the government at the time were using the opposition to enrich themselves. They were very corrupt. The psychological pressure and the threats continued all the time—toward me and my colleagues.

Q: Eventually, you left Donetsk, in the troubled Donbass region, for Kyiv.

I left for Kyiv because my city was occupied by pro-Russian separatists.

Q: In the West, there’s a lot of talk about Ukraine in the context of those Russian-backed separatists in the Donbass region, and Russia’s claim to Crimea. But that can be distracting from all the ongoing domestic issues you report on. How badly does Ukraine need domestic reform?

Reforms in Ukraine are very needed, regardless of the conflict. First of all, we need reforms against the corruption of government and the influence of big corporations and oligarchs. And the best possible methods of the reforms must be discussed by society. Unfortunately, there is no dialogue between the government and the people, and the decisions are still being made in the same way as in Yanukovych’s time. It’s a big problem, because there have been no changes in the democratic process so far.

Q: After the protests in the Maidan, which eventually led to the deposing of Yanukovych, there was a lot of talk of there being signs of an energy that could give birth to a new Ukraine. Are you saying that you haven’t seen those signs?

If you speak specifically of the Donetsk region and the Donbass, there are no changes there, because the new government was not effective in this fight with local corruption. For example, during the recent election, even if it was very obvious that somebody bought the ballots, police and government did not react in any way. Moreover, there are many people from Yanukovych’s team that still work in the government positions today, and are also in current president [Petro] Poroshenko’s team.

Q: What about in Kyiv?

I’d like to believe so, but, in reality, it’s not like that. For example, the decision of Kyiv not to pay pensions and social assistance to the people of Ukraine who live in the occupied territories—they don’t show that the government really cares about people and support them in those territories.

Q: Has the Russian incursion actually provided a kind of cover for the Ukrainian government, allowing them to blame its ongoing crises on that, rather than focusing inward?

Yes, it can look like that. Moreover, the war could be the reason for them to save money in the budget. For example, not paying pensions to those people—that way they can say they save the money in the Ukrainian budget. And the budget for the next couple months, the people who live in the Donetsk regions, they’re not even included there.

Q: The state-owned oil and gas company, Naftogaz, is a good example of the realities of this multi-front war. There’s reportedly a ton of corruption in the company, but it’s also facing the fact that it needs enough energy for the country to survive the winter—and may need to look to Russia.

Naftogaz right now only exists because this is money from the Ukrainian government. And, surprisingly, there are no reforms in that company. Naftogaz will likely be a scheme for corrupt acts in the future. It’s better to ask experts about that, but there are thoughts in society that this company that should be making money [is] a company that owes money, that has debts.

Q: Can reform really come from within, or does it have to come from outside, like from the European Union?

There is a discussion going on about using foreign experts in the Ukrainian reforms. But there is no uniform position toward that in society. Ukraine never had this kind of experience before with foreign experts, and it seems evident that Ukraine needs European help with the economic crisis there.

Q: Some say the EU may be worried about accepting Ukraine because of the corruption in its systems. Does Ukraine need to get its own house in order first?

Yes. The corruption is the biggest problem in Ukraine. They are working now to propose an anti-corruption package, and then the mechanisms of transparent government. But in Ukraine, nobody talks about unification with the European Union. The number 1 discussion in Ukraine now is to overcome that war in the eastern regions, and everybody understands that this is a war for European values.

Q: Let’s talk about that conflict. In September, Ukraine and the separatist groups signed a ceasefire called the Minsk Protocol—but that has not been much of a ceasefire, has it?

It was just a formality, which doesn’t change any situation in the war. The Minsk Protocol cost hundreds of Ukrainian citizens’ lives.

When the group was chosen to negotiate the Minsk Protocol, there was no discussion in the country about that. President Poroshenko decided that the ex-president was supposed to be in this group. Nobody was there to represent the Ukrainian people, no one [was there] to represent the Donetsk region. That’s why the result of that group and that agreement—nothing came out of it, because they didn’t have a representative from the region. They didn’t have the united front. That’s why transparency needed to be there in every step, which will force the government to be more accountable—because the government makes decisions on behalf of people without consulting those people.

Q: Why does Ukraine want to keep the Donbass region so badly?

First of all, it’s a question of national dignity. Second, in those territories, we have citizens of Ukraine. And third, if we lose those regions, there could be the threat that Russia will not stop there and will continue all the way to Poland.

Q: In those separatist groups in the Donbass, where are they getting their money, and how are they spending it?

There are three ways of financing their economy. The first is the sale of automobiles which were stolen; they take them to Crimea and sell them at half the price. This cash they bring back to Donetsk and spread it out to people as their pension. Second, it’s slave trade. They steal people and demand money, like a ransom. If they don’t get their pay, they force those people to work. Third, it’s drug money. They sell drugs from Donbass and spread it toward Ukrainian territories and also in territories of Russia. Those are their income sources. They spend it on entertainment, to travel to Russia, and social payments to the people, like pensions. They pay people to show them that they care. People don’t ask questions about where the money is coming from.

For example, yesterday, I received information that the government of Ukraine transferred four billion hryvnia to buy coal for those occupied territories, and nobody knows what really happened to the money. They will be investigating where the money went, because this money was not transferred toward salary payments, and most of these coal mines, which were supposed to receive this money, they are not in operation. But money, they received.

Q: How do you see the conflict in the Donbass playing out?

Unfortunately, the conflict will not end as soon as I would like. Putin will not stop there. But international sanctions can work, and will stop him. In that way, they can stop his aggression toward the Ukraine and toward Europe. If separatists will not be backed by the Kremlin, then there won’t be any separatists in the Donetsk region, because that group, in the past, was very marginal. I compare them to the marginal neo-Nazi groups, for example, in the U.S. They never had their own factions or party or newspaper. But, as soon as they received funds from Russia, right away, they found support in the society. But if there really was support in society, half of the Donetsk population would leave.

There is hope, and I think that Ukraine will win. What’s happening now in Ukraine is a healthy process; the body of Ukraine is trying to rid itself of Soviet drama and, sooner or later, it will be healed. But in order to do that, you have to keep the body in perfect shape. Walls never exist forever, like the Berlin wall. In the Soviet era, there was the Iron Curtain; Russia is now building a Kremlin Curtain. The problem is that this Kremlin Curtain is still in people’s minds because of the ongoing propaganda there. It’s still a wall. But walls are meant to fall, and this one will, too.

Q: Canada’s Prime Minister has been in the news for his tough talk over Ukraine, specifically, his strong language in telling Putin to get out of Ukraine. Has that been noticed in the country?

In Ukraine, every little help from the side of international countries is noticed. Right now, they watch the Canadian military help and, these days, these are the first frontline news, Canada’s help to Ukraine. His words were noticed, but, unfortunately, just looking at news on the Internet—the Interfax-Ukraine [a major news wire]—they translated “get out” a little bit mildly, so they just said, “You have to leave Ukraine.” So maybe that’s why it didn’t make as much news there as it did everywhere else.

This interview has been condensed and edited for clarity.