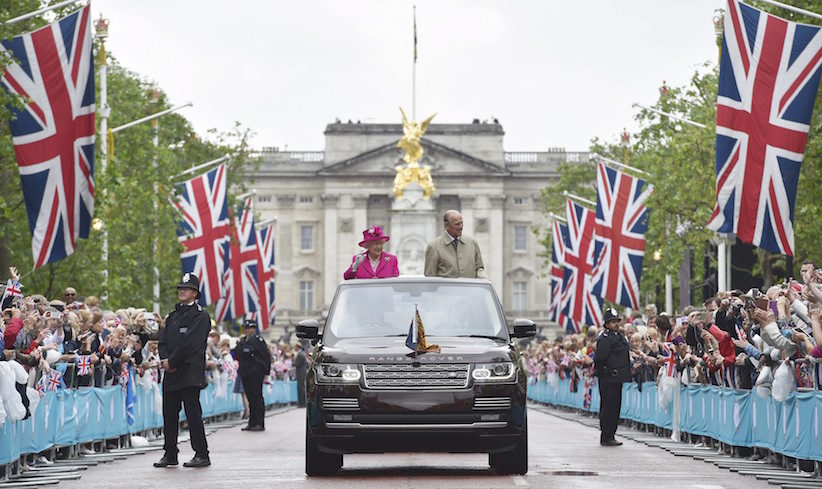 Queen Elizabeth II and the Duke of Edinburgh arrive at the Patron’s Lunch in The Mall, central London in honour of the her 90th birthday, in an open topped Range Rover, Sunday June 12, 2016. The Queen’s grandson Peter Phillips has masterminded the street party for 10,000 people, to mark the monarch’s patronage of more than 600 charities and organisations. (Toby Melville / PA via AP) UNITED KINGDOM OUT – NO SALES – NO ARCHIVES

LONDON — Queen Elizabeth II’s subjects serenaded her with impromptu renditions of “Happy Birthday,” on Sunday, as the monarch slowly drove past some 10,000 people attending a massive street fair in her honour.

The drive past in the “Queen mobile” was the highlight of the party on The Mall, the road leading to Buckingham Palace. The picnic is the grand finale of a weekend of official events marking the monarch’s 90th birthday and celebrated some 600 charities to which she lends her patronage.

This being Britain, it rained. But those picnic baskets came out regardless.

The partygoers put on ponchos included with admission — umbrellas were banned — and just got on with having a good time while waiting for her to emerge from the palace.

She didn’t disappoint them. Speaking from the heart, she unexpectedly came to the microphone to thank them for their support and encouragement. She closed with a bit of wit.

“How I will feel if people are still singing Happy Birthday in December remains to be seen,” she quipped.

Before the queen’s arrival, members of the royal family strolled along the edge of the crowds. Prince William, his wife Kate, and Prince Harry shook hands, patted the tops of children’s heads and found themselves framed in countless selfies.

Despite the general good cheer, the non-profit event has not been without controversy. Tickets cost 150 pounds ($214) each — a figure criticized by many as being too expensive.

Charities were asked to pay for the passes themselves, but were allowed to raise money with 40 per cent of their tickets.

For the price of entry, the participants feasted on Scottish salmon, Northern Ireland roast beef, pork pies, cheese — little bits of the United Kingdom on a plate.

But there were no tents, and it was a sodden day.

“It’s wonderful,” said Eric Armstrong with a trace of sarcasm. He came from Christchurch, England, with his wife — only to huddle under a tree to stay dry.

There was a thundering “Hip-Hip-Hooray” for her at the end. And for just a moment, that famous stoicism slipped a bit.

She inclined her head, smiled and waved a white gloved hand.