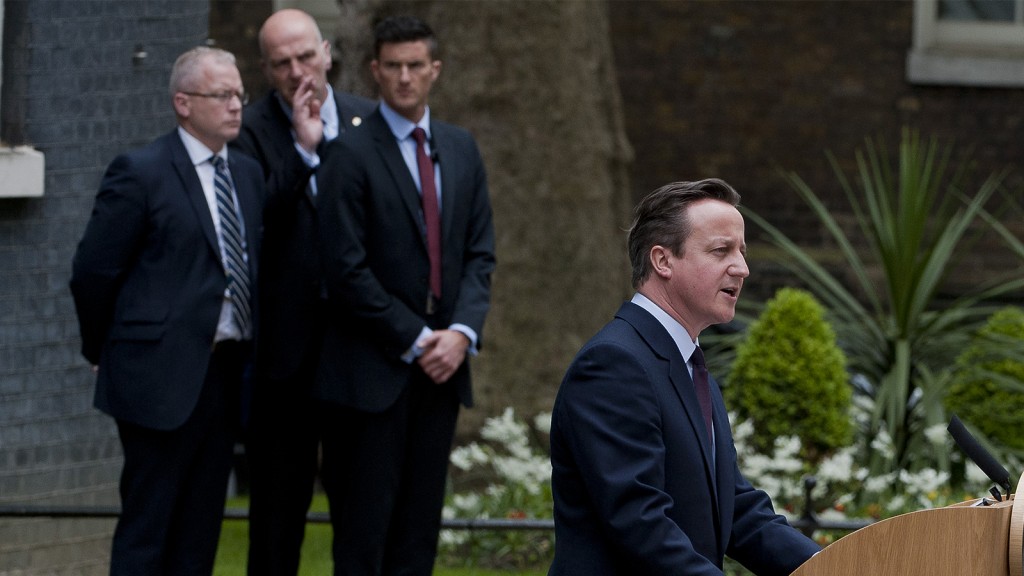 LONDON — Pomp met politics as Queen Elizabeth II donned a diamond-studded crown Wednesday to read out laws planned by Britain’s new government, including more autonomy for Scotland and a referendum on whether to remain in the European Union.

It was the 62nd time the 89-year-old monarch has delivered the annual Queen’s Speech, but this year’s proposals have especially profound implications for the future of the United Kingdom she heads.

Prime Minister David Cameron’s Conservative administration said it would “renegotiate the United Kingdom’s relationship with the European Union” and hold an in or out referendum on membership by the end of 2017.

At home, it promised a “strong and lasting constitutional settlement” with major new powers for Scotland and — to a lesser extent — Wales.

The speech, delivered by the queen but written by the government, is the centerpiece of the ceremonial State Opening of Parliament. It follows a May 7 election that unexpectedly gave Cameron’s centre-right Conservatives a parliamentary majority — and with it the power to implement a political agenda without coalition compromises.

“This is the Queen’s Speech for working people, from a one nation government that will bring our country together,” Cameron told lawmakers in the House of Commons after the queen’s address. He vowed to create “a country that backs those who work hard and do the right thing.”

The speech promised laws to cut red tape for small businesses and freeze income and sales tax rates until 2020. There was also a right-to-buy plan to help thousands of tenants become homeowners.

The unemployed face a lower cap on benefits, while the government plans to make it harder for unionized workers to strike and to introduce new controls on immigration.

Cameron’s “one nation” may well have looser bonds. Scotland is getting more powers to raise and spend taxes, fulfilling a promise made by Cameron before last year’s Scottish independence referendum. Wales will also gain more autonomy, and there was a promise to reduce the say of Scottish lawmakers over policies that affect only England and Wales.

Details of that plan, known as “English votes for English laws,” are likely to prove contentious _ one of several bills the government may struggle to pass with its majority of 12 seats in the 650-seat House of Commons.

New measures to limit extremist preachers’ public activities could prove contentious. So could a plan to “modernize the law on communications data,” reviving an attempt to broaden spies’ surveillance powers that failed in the last term of Parliament.

And an election vow to replace the Human Rights Act — which has a European court as its top arbiter — with a British bill of rights was reduced to a promise of “proposals” rather than legislation. The plan is opposed by some Conservatives as well as opposition parties.

Labour Party leader Harriet Harman said that if the Conservatives “seek to undermine basic human rights, take us out of the European Convention (on Human Rights) or undermine our ability to stand up for human rights abroad, we will oppose them all the way.”

The State Opening is an annual pageant steeped in symbolism of the historic power struggle between the monarchy and Parliament.

Since King Charles I tried to arrest members of the House of Commons in 1642 — and ended up deposed, tried and beheaded — the monarch has been barred from entering the Commons chamber.

As a result, the queen delivered her speech in the House of Lords — Parliament’s unelected upper house — to a tightly packed audience of lawmakers in ordinary clothes and peers in red robes trimmed with ermine.

She sat on a gilded throne wearing the velvet parliamentary robe and the Imperial State Crown, encrusted with almost 3,000 diamonds.

Lawmakers were summoned from the House of Commons by Black Rod, a security official — but only complied after first slamming the door in his face to symbolize their independence.