Race to the bottom in Ferguson

The riots in Ferguson drew all kinds of ‘outside agitators.' They didn’t all get along. But they had common cause. 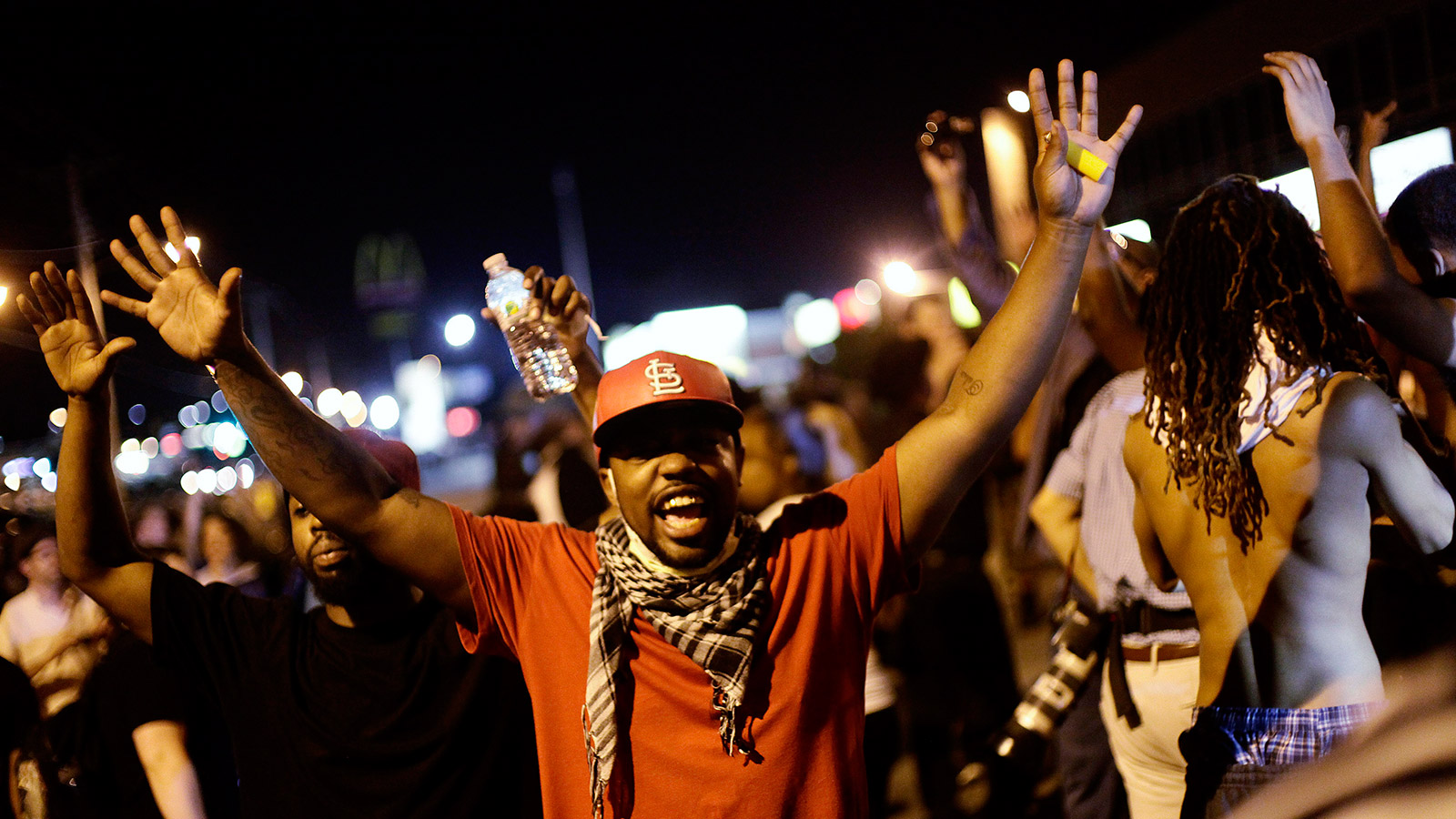 At first glance, he might have been one of the hundreds of angry local residents who took to the streets last week in Ferguson, Mo., to protest the police shooting of Michael Brown. But those round, East Coast vowels of Carl Dix’s quickly gave him away. “The big city accent is not the same as the one down here in a Midwest, small town outside of St. Louis,” acknowleged the 65-year-old. “They’d say, ‘Where you from?’ I’d tell them I’m from New York, and then I’d tell them why I came.”

As a founding member of the Revolutionary Communist Party U.S.A., Dix travelled to Ferguson because he saw an opportunity to, as he put it, “connect this stuggle to the bigger picture.” The reception, he said, was warm: “The protesters would hug me and thank me for coming down. It was the same from people on the streets of Ferguson.” Not everyone put out the welcome mat. Civic leaders and media commentators in St. Louis lamented the arrival of “outside agitators,” who they said were exploiting local anger to further their own political agendas. Dix—the spokesman for a movement dedicated to overthrowing America’s existing political order—is pretty much the definition of an outside agitator. On Aug. 18, he got himself arrested by flouting a midnight curfew, which Missouri Gov. Jay Nixon had imposed after consulting with community activists and leaders involved with the protests. When asked whether throwing bottles at police was justified, he gave a rhetorical shrug. “The people have a right to be angry,” he said. “The authorities should not be able to continually restrict how people can express that anger.”

If you’re wondering how a spontaneous outcry over one young man’s death can morph into sustained, nightly conflagrations with police—complete with tear gas, arson and mass arrests—the presence of people like Dix offers at least a partial explanation. He counted among scores of activists who flocked to Ferguson, population 21,000, when images of the demonstrations first hit newscasts. Some were well-meaning community organizers and civil rights campaigners. Others were hard-eyed zealots, including Malik Shabazz, a former national chair of the New Black Panther Party, whose fellow socialist revolutionaries arrived in black uniforms and marched through Ferguson in formation. In 2007, Shabazz was barred from entering Canada because of his history of anti-Semitic rhetoric.

The result was, effectively, two different protests. By day, the front lines were manned and monitored by respected local leaders like Rev. Traci Blackman, pastor of Christ the King United Church of Christ, and Antonio French, a St. Louis alderman. By night, a harder core of activists took over, defying police and ignoring the pleas of others to keep things peaceful. That many of the latter belonged to groups based in New York, Chicago and Washington didn’t sit well with the local leaders. “Some people think that the revolution is starting now, and they want to be here,” French acidly told the St. Louis Post-Dispatch.

The outsiders didn’t even see eye to eye with each other. Last week, Dix clashed with members of the New Black Panthers over whether to respect the curfew, claiming one man shoved him toward police lines and implored officers to arrest him.

Still, by the middle of last week, the interlopers had gotten at least one message out: These demonstrations were about more than one stricken suburb in middle America. The shooting of 18-year-old Brown, they said, along with the town police department’s epic blunder of answering public protests with cops decked out like special forces soldiers, mirrored the treatment received by low-income African Americans across the country—especially those with the nerve to voice their discontent. “African American and Latino people are finding disappearing job opportunities as the economy globalizes,” Dix told Maclean’s. “The education system has been geared to fail them. There’s no hope for the future, and what they get from the authorities are police, laws targeting and criminalizing them. What the people in Ferguson are suffering is an overall repressive program. It’s a system that punishes people for whom it has little or nothing to offer.”

Hyperbole? Maybe. But what seemed boilerplate rhetoric a month ago is getting a much closer hearing today. Elizabeth Kneebone, an economist at the Washington-based Brookings Institution, agrees events in Ferguson hit a nerve because the community’s galloping poverty rate and steady loss of white, middle-class residents reflect trends across the U.S. In the country’s 100 largest metropolitan areas, she notes, the number of suburban neighbourhoods where more than one in ﬁve residents live below the poverty line doubled between 2008 and 2012, with a disproportionately heavy impact on black people. At last count, 53 per cent of those living in the above-noted neighbourhoods were, statistically speaking, poor.

That one-in-five measure is important, she says, because that’s the level where the effects of poverty start appearing to the naked eye. Community centres close. Grocery stores pull out. Schools go downhill because the tax base is too shallow to maintain them. Meanwhile, the flight of wealthier people accelerates, leaving behind a mostly black economic underclass. That pretty much sums of the state of things in St. Louis county, where communities continue to split along racial lines that date back a century, when discriminatory ordinances kept black people from buying houses in white neighbourhoods.

Ferguson, for one, went from being 85 per cent white in 1980 to 67 per cent black in 2012. Yet the power structure—police, municipal council—remained as white as ever. The police force has fewer black officers (three) than it does German shepherds (four). “This leads to a real disconnect,” says Kneebone, “a real lack of understanding and communication.” Or worse: In Ferguson, it led black residents to conclude that the authorities view them as the enemy.

That such cleavages persist gives lie to notions of a post-racial America, which many felt had arrived with the election of Barack Obama as President. Obama has disappointed black Americans, says Darnell Hunt, a UCLA professor who specializes in race relations, but he’s not the only politician who sat by while economic disparity took the place of codified segregation. “The median income for black families is about 60 per cent that of the typical white family,” says Hunt. “Well, guess what? That same figure existed in 1967.” He points to the asset gap between African Americans and whites as well as the incarceration rates of black people, both of which are much higher than in the 1960s. Since the civil rights era, he says, “things have gotten worse for African Americans, not better.”

With questions of race so deeply interwoven with economic forces, solutions are elusive. Jason Purnell, a public health professor at Washington University in St. Louis, recently led a comprehensive project aimed at finding ways to improve the well-being of the city’s African Americans. His team offered ideas that cut across the public policy silos, from better prenatal care to housing vouchers that allow low-income residents to choose better neighbourhoods. What the group couldn’t address, he acknowleges, is the growing force of America’s wealth divide. “It’s harder and harder to find geographic areas where the social classes live next to each other,” he laments. “Race and economic disparity shouldn’t be conflated here. It’s too simplistic to just say one or other is to blame. It’s the interaction of both.”

Creative proposals to bridge the financial gulf abound. Some suggest focusing on building assets for blacks rather than dwelling (as many economists do) on income. Others call for fostering entrepreneurialism among African American schoolchildren. Practically everyone agrees on the need for stay-in-school initiatives in places like St. Louis county, where one in 10 black students drops out of high school.

But all are long-haul ideas whose milestones lie decades, not months or years, ahead. For the time being, no amount of money will ease the sense of injustice that Michael Brown’s death unleashed. Recent police shootings—including one that killed a 25-year-old St. Louis man just 10 days after Brown died—have come under renewed scrutiny. And within days, a predominantly white grand jury will decide whether to indict Darren Wilson, the officer who allegedly pulled the trigger on Brown. Anything short of a murder charge, and you can expect Ferguson’s streets to fill anew with protesters. They won’t need outside agitators to tell them something’s seriously wrong.