Why Rahul Gandhi is a reluctant politician

He's the new face of India’s legendary political dynasty and, if he has his way, he may be the last 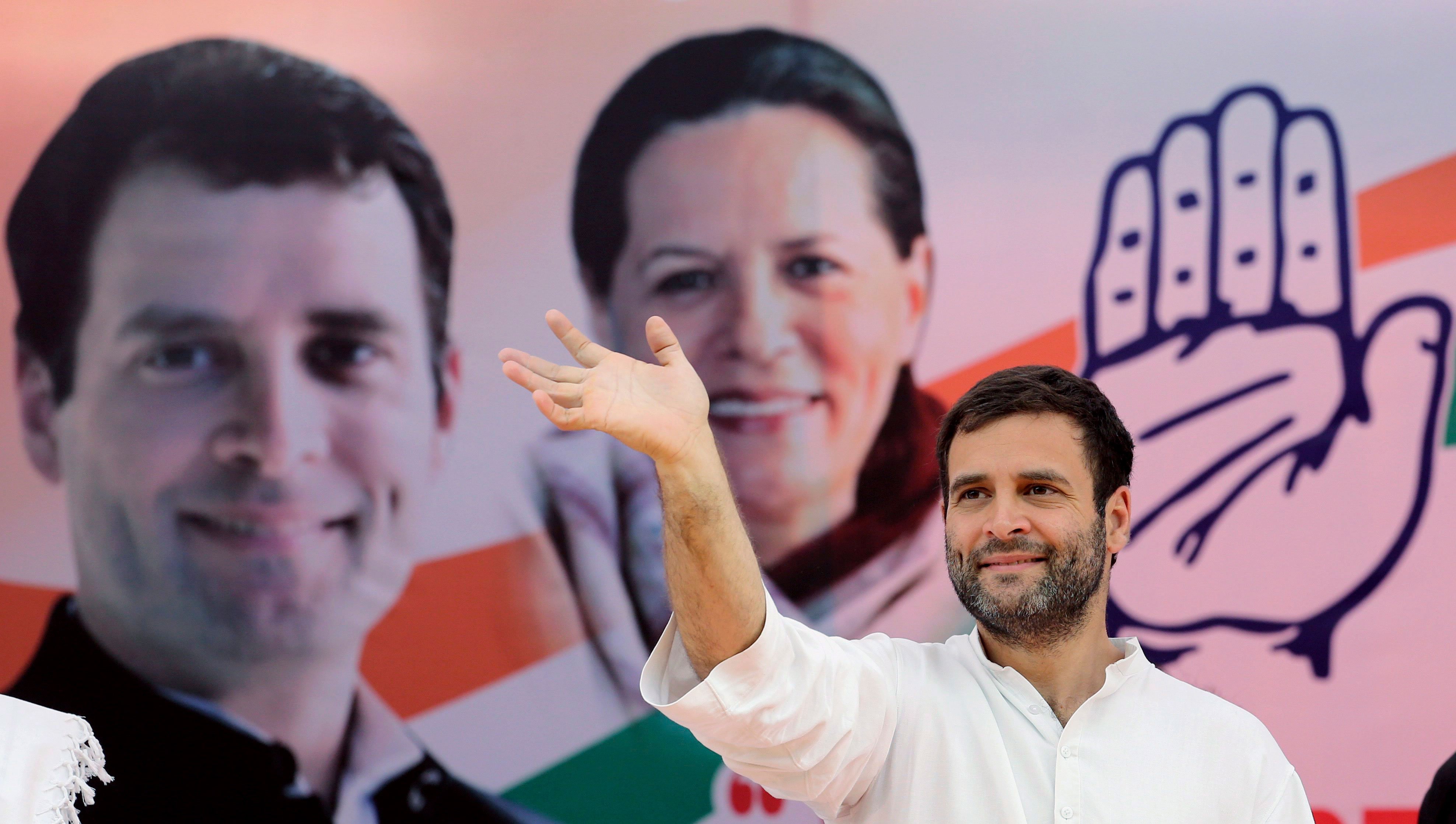 By the time Rahul Gandhi was 19 years old, he had learned some hard lessons about politics. His grandmother, Indian prime minister Indira Gandhi, was assassinated by her Sikh bodyguards in 1984. His father, Rajiv Gandhi, who replaced her in office, was killed in a suicide bombing while campaigning for re-election in 1991. A politician is the last thing you’d think Rahul would want to be. And today, at 43, even as he campaigns to follow in his father’s and grandmother’s footsteps to lead the world’s largest democracy, it still seems that way.

Should the Indian National Congress—the party most closely associated with his great-grandfather, Jawaharlal Nehru (India’s first prime minister)—return to power, Gandhi is expected to be a shoo-in for prime minister (chosen for the post by Congress party members). In reality, however, political pundits expect much the opposite: a crushing defeat at the hands of the country’s second-largest national party, the right-of-centre Bharatiya Janata Party, or BJP. And Gandhi, who has appeared hesitant and out of place on the campaign trail, will mostly have himself to blame.

Some 800 million people are casting their votes over a six-week election process that ends on May 12. The Congress party has much to lose: It has been in government for two successive terms and has been in power for most of India’s post-independence years. As pundits predict a BJP victory, the Gandhi family is campaigning hard to protect its legacy. Insiders had hoped that Rahul would be a fresh new face for the party and appeal to young voters, though he has been banking on the old Congress model of policies to help the poor, such as farmer subsidies and free school lunches. Meanwhile, the opposition BJP has put forth a much stronger, though controversial, leader: 64-year-old Narendra Modi, the current chief minister (akin to a provincial premier) of one of India’s most economically progressive states, Gujarat. Modi has been dogged by his handling of Hindu-Muslim riots in 2002, during which a large number—at least 1,000 Muslims—were killed in Gujarat. Nevertheless, he has been riding a wave of anti-Congress-party sentiment lately, fuelled by government corruption scandals and a slowing economy.

From the get-go, Gandhi faced a challenge appealing to the electorate. He came across as uncomfortable and shifty in his only television interview in years. His election campaign picked up pace only after a NDTV poll predicted an all-out majority win for the BJP. “What has [Gandhi] done?” asks Pramath Sinha, founding dean of the Indian School of Business, and a senior adviser to McKinsey & Co. “What has he delivered? To say that he is leader because he is someone’s son is not enough to be truly respected, to be seen and acknowledged as a leader.”

By contrast, Modi has run a surprisingly effective campaign, promising higher economic growth rates and a more pro-business approach. His bespectacled and white-bearded face is everywhere: on newspaper advertisements, on television, on billboards and wall postings. He has also taken aim recently at the dynastic succession model of the Congress party, saying last week that Rahul’s mother, Congress party president Sonia Gandhi, has shown “blind love” toward her son that has left the country in “ruins.”

When Rahul’s father was assassinated, his mother took over the party’s leadership, safeguarding her son’s position until he was ready to take over. But Rahul, after completing his M.A. from the University of Cambridge and working as a management consultant in London, never seemed all that interested.

His supporters argue that his determination to change the way the party functioned was misinterpreted as naïveté, or worse, as disinterest. Unhappy with party corruption and the old system that favoured select loyal members, he set about a grassroots effort to democratize the party. Moreover, the party was suffering from a barrage of corruption charges relating to contracts ranging from large defence deals, to the 2010 Commonwealth Games, to a huge coal scandal. Rahul was keen to shake up the Congress apparatus and breathe new life into the party.

“I think there clearly was, in the past, a sense that he had this bottom-up approach with trying to have grassroots democracy with building the Youth Congress,” says Siddharth Varadarajan, senior fellow at the Center for Public Affairs and Critical Theory and former editor of the Hindu newspaper. “But that whole experiment doesn’t seem to have gone very far, primarily because signals from the top have been very mixed.” Indeed, the more powerful among Congress leaders stymied the initiative. In January 2013, Rahul Gandhi accepted the vice-presidency of the Indian National Congress, a move that, some say, signalled the defeat of his democratizing initiative and his acceptance of the status quo.

With his mother as party president, it was clear that Gandhi (who happens to be running for the same seat his father once held in the national legislature) would be nominated the prime ministerial candidate by his party.

India’s political system normally works through a complex coalition process. Until 1989, the Congress party coasted on the legacy of the country’s first prime minister, Gandhi’s great-grandfather. Since then, however, it has had to compete with other national parties, primarily the BJP, and enter into coalitions with regional parties. In India’s last elections, Congress won 28.5 per cent of the vote, and the BJP 18.8 per cent. A recent poll says the BJP will win a majority of seats (more than 272 seats of 524) this time.

Over the years, Congress has found success providing mass subsidies and pro-poor budgetary programs such as the National Rural Employment Guarantee Act, a scheme that guarantees 100 days of annual paid labour to its rural populace. Modi criticizes such schemes as vote-buying methods that have driven the economy to its slowest growth rates. Rahul Gandhi has only just begun to respond. Many critics believe that his sister, Priyanka, is more politically astute and would have made a better heir. As she campaigns for her brother in Amethi, she appears far more confident. “Modi’s rise is the result as much of Rahul’s failure and fault as it is of Modi’s success and effort,” argues Ananya Vajpeyi, associate fellow at the Centre for the Study of Developing Societies in New Delhi.

Gandhi’s reluctance to embrace politics likely can be traced to the family deaths of his childhood. After his uncle, Sanjay—the family’s preferred political heir—died in a plane crash, Indira Gandhi turned to her reluctant other child, Rajiv (Rahul’s father), and began to prepare him for politics. Four years later, in 1984, her bodyguards shot her 30 times while she was in the garden of the prime minister’s residence. Rajiv, a former pilot, become the country’s prime minister later that year. In 1991, he was killed by a suicide bomber linked to Sri Lanka’s Tamil Tigers over India’s involvement in Sri Lanka’s civil war.

Many sympathize with Gandhi. And while political pundits and polls forecast a BJP romp, the verdict is not yet out: India’s rural population (where two-thirds of the electorate is based) is difficult to predict and tends to vote based on caste, as well as regional and other long-term associations. Still, it seems unlikely that Gandhi’s approach will win him the job of prime minister. “The fundamental point,” says the Indian School of Business’s Sinha, “is that people don’t acknowledge you for good intentions. They only acknowledge you for what you have delivered.” So far, for Gandhi, that hasn’t been nearly enough.