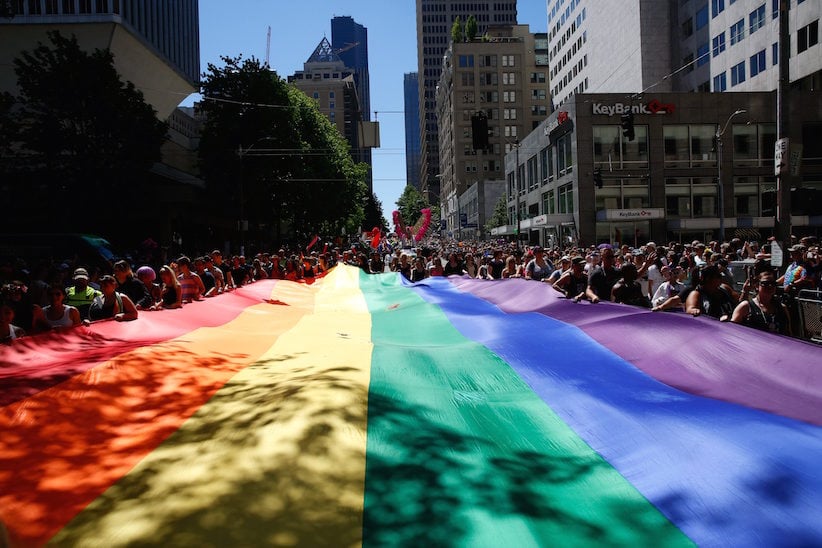 NEW YORK — Rainbow flags were held high along with portraits of the dead as thousands of people marched Sunday in gay pride parades tempered by this month’s massacre at a Florida gay nightclub.

Crowds of onlookers stood a dozen deep along Fifth Avenue for New York City’s parade. Some spectators held up orange “We are Orlando” signs, and indications of increased security were everywhere, with armed officers standing by. An announcer introducing state officials and guests also shouted out, “Love is love! New York is Orlando!” in memory of the 49 people killed in Florida. Elected officials turned out in force, as did presumptive Democratic presidential nominee Hillary Clinton.

On Sunday, with her Twitter handle appearing in rainbow colours, Clinton wrote: “One year ago, love triumphed in our highest court. Yet LGBT Americans still face too many barriers. Let’s keep marching until they don’t. -H”

MORE: After Orlando, a pride revolution

Authorities had expected a larger-than-usual crowd, and 15-year-old Chelsea Restrepo, of Staten Island, was among the onlookers. She had brushed aside her father’s concerns about security to attend the march for the first time.

“What happened in Orlando made me want to come more,” said Restrepo, swathed in a multicoloured scarf. She said she wanted to show her support.

Kenny Hillman, a 39-year-old Brooklyn filmmaker, was ready to roar his Triumph Bonneville down Fifth Avenue.

The transgender New Yorker said he hadn’t planned to come to the march.

“For me, I wasn’t going to ride because I have 17-month-old twins at home. But then Orlando happened, and seeing so many of my friends shrink in fear made me realize that coming here was more important,” said Hillman, wearing an anti-assault guns T-shirt.

New York’s parade was one of several being held Sunday across the country, along with San Francisco, Chicago, Minneapolis and St. Louis. They came two weeks after the nation’s deadliest mass shooting in modern U.S. history.

In Chicago, 49 marchers at the head of the parade each held aloft a poster-sized photograph of a different Orlando victim as the procession wound through the city. Above each photo were the words, “Never forget.”

Despite the sombre start, parade-goers seemed as enthusiastic as ever once marchers and floats began moving, cheering and dancing along the route. Many participants said the tributes to the dead in Orlando didn’t dampen the energy and fun associated with the pride parade.

“It is another on a list of brutalities over the years (against gays),” said Joe Conklin, 74, of Chicago, as he sat on the back of a float waiting for the OK to move out. “We’re aware of Orlando but not overwhelmed by it.”

It was a similar feeling in San Francisco, where men in glittery white wings walked on stilts and women in leather pants rode motorcycles as the parade moved along.

Richel Desamparado, of Oakland, California, was marching and carrying a photo of Orlando victim Stanley Almodovar. She said she felt the need to remind people the fight for equality is not over. “A lot of my gay friends and relatives are still being shunned away by their families and communities,” said Desamparado, 31. “People need to remember we’re still fighting for equality.”

Sunday’s parades did have a new milestone to mark: President Barack Obama on Friday designated the site around New York City’s Stonewall Inn as the first national monument to gay rights.

Security was ramped up at the events. New York police deployed roving counterterrorism units and used bomb-sniffing dogs, rooftop observation posts, police helicopters and thousands of officers to provide extra layers of security at Sunday’s parade. Thousands of uniformed officers lined the route, supplemented by plainclothes officers in the crowd.

At a gay street parade in Turkey, a prominent German lawmaker and outspoken gay rights advocate was temporarily detained Sunday when he wanted to speak publicly at the end of Pride Week. Turkish police have repeatedly in recent days prevented activists from participating in LGBT rallies.

For all the security and solemnity, some spectators at pride parades this month have made a point of making merry.

“We had fun. That is what gay people do,” comedian Guy Branum wrote in a New York Times essay after attending the West Hollywood parade. “Our answer to loss and indignity, it seems, is to give a party, have a parade and celebrate bits of happiness.”