The rank amateurs trying to bring down Gadhafi

Out of the clear blue sky came the ominous roar of the incoming bomber. At the chaotic checkpoint in Ras Lanuf, rebel fighters who took the strategic oil port city last Friday wildly fired anti-aircraft guns. Cars blared their horns and skidded away. Men flung themselves behind sand dunes, or vehicles loaded with ammunition. Seconds later, the plane dropped its bomb. It exploded in the sand, 30 m from the road.

Moments before, the rebels had been decrying the disaster that was befalling them 50 km west. There, Col. Moammar Gadhafi had unleashed the full fury of his military arsenal, with warplanes and ground troops repelling the westward rebel advance at Bin Jawad, the last town on the coastal highway before the Libyan leader’s birthplace of Sirte. Rebel forces were hit with Katyusha rockets and airborne missiles. It being too dangerous to even rescue their fallen comrades, fighters were reduced to firing bursts of rifle and anti-aircraft fire into the air in helpless defiance.

For the rebels who rose up against Gadhafi on Feb. 15, the past week provided sobering moments. After gains that saw them taking control of much of the eastern part of Libya, their drive westward toward Tripoli, and uprisings in towns around the Libyan capital, stalled in the face of the colonel’s air power, as forces loyal to the regime launched counterattacks to try to regain strategic assets. In the town of Zawiyah, just 50 km east of Tripoli, taken by the rebels on Feb. 27, Gadhafi launched a devastating assault complete with some 50 tanks. Witnesses spoke of indiscriminate killing, with women and children mowed down in the streets.

The rebels have been calling on the West to impose a no-fly zone. And even as Libyan towns are consumed by violence, NATO ships have been moving into position just off the country’s coast, while AWAC surveillance planes are maintaining a 24-hour presence above the Mediterranean Sea. But before considering any military action, Western politicians want diplomatic cover, wary of being seen as acting unilaterally in yet another Muslim country. With France and Britain working on a no-fly resolution for the UN’s Security Council, support for outside intervention is growing in the region. The secretary-general of the Arab League, as well as the Organisation of the Islamic Conference, have called on Libyan civilians to be protected. But with Gadhafi’s troops and mercenaries growing increasingly bold in their counterattacks, time could be running out for many rebel-held towns.

At the oil terminal of Brega, 110 km east of Ras Lanuf, the fighters who had captured the site on Feb. 25 prepare for further battle. A child sits atop a demolished concrete bus stop, legs swinging, watching the scene. A faded poster of Gadhafi lies burned and torn on the ground, fighters stomping on it with vigour as they walk past. Wooden boxes filled with cylindrical bombs lie in the sand next to bagfuls of buns. Gun barrels and swords poke from under the men’s long Arab dress. “We won’t let him win,” says one, wielding his sword. In one car, a surface-to-air missile lodged between the driver’s legs pokes out of the window.

Some speak of moving west to bolster the rebels there. “I am waiting here for the military to give us the order to move, then we will go to Bin Jawad,” says Haibah Helal, 40. Until two days ago, when he volunteered for the front line, he was a geologist for an oil company. He is also an expectant father. “My wife is giving birth today,” he says. “My family just called to say they are taking her to the hospital. He is a boy.”

The revolutionaries who have swept away Gadhafi’s rule from much of eastern Libya are in large part civilians, protesters whose victory in eradicating the regime in Libya’s second-largest city, Benghazi, and surrounding towns, has spurred them to take up arms and try to take the revolution to Tripoli.

Helal is well off, with a good home and a well-paid job. It is not financial deprivation that motivates him—this is not just an uprising of the lower classes. “Gadhafi is spreading rumours that we are all taking drugs, that we are poor,” he says. “It is not true. I swear, half these people and more are doctors and engineers.”

Helal drives a sleek new Toyota pickup, the red paint still gleaming. Now, welded to the back of it is heavy-duty military weaponry. An anti-aircraft gun points at the sky, a long ammunition belt dangling from it. The pickup is filled with rocket-propelled grenades, or RPGs.

But while much heavy weaponry has been raided from conquered military stores, few know how to use it. Jamal al Gharadi, 23, has worked in a donut shop in Denver. “This is the first time I have ever held a gun,” he says in a thick American accent. “I haven’t got to fire it yet—all I saw today was weapons. I saw bombs flying overhead. I have never seen anything like it, man.” 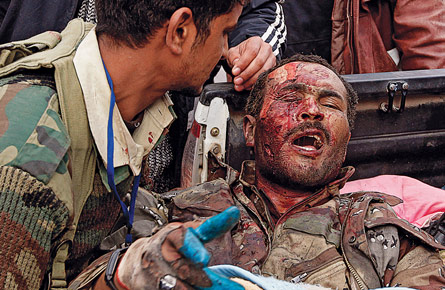 Imad Giriani, a civil engineer from Brega, awkwardly clutches a battered old rifle and two magazines. “This is the first time I have used it,” he says. “I have had one minute of training.” Asked if the rifle’s safety catch was on, he replied, “I think so.” He produces a hand grenade. “This is what I am worried about,” he says.

Initially, the inexperience has been partly compensated for by raging high spirits. The rebels believe to have God on their side. “Morale is high, the point is that God is with us. But Gadhafi, nobody is with him,” says Giriani.

Before going into battle last Friday, the rebels preparing to take Ras Lanuf gathered for prayers. They lined up with guns slung on their backs, in the dunes by their positions. With no imam, a doctor in a white coat led the prayers: “We have to organize ourselves, may God help us, the people of Tripoli are our brothers and sisters.” Then, chanting “victory or martyrdom,” they launched their attack, in an onslaught that brought them 110 km closer to Tripoli. On the desert road, as artillery shells thudded nearby, they sent up their war cry: “Any man with a gun, come and fight for freedom! Allahu akbar, Allahu akbar!” One truck driver raged, “I am not a soldier, I work at the university, but I am not afraid—I want to fight f–king Gadhafi!”

The casualty count grew. Ambulances raced forward. The blood of four dead fighters who had been taken away dripped from the back of a truck. Yet the rebels managed to take Ras Lanuf, even though their equipment didn’t match that of Gadhafi’s trained forces. “They have heavy artillery, 122-mm rounds,” confirmed Peter Bouckaert, emergency director for Human Rights Watch, who was at the scene. “The rebels have Kalashnikov and RPGs. These are inefficient at holding them off.”

The fighters admitted that theirs was a battle against the odds, but vowed to press on toward Bin Jawad, then Sirte. Overexcited with their victory, they ignored the advice of officers, all defectors from the Libyan army, to hold their defensive line at Ras Lanuf. The subsequent attack was disastrous—Gadhafi’s forces hit back hard, to prevent the advance of “Free Libya.” Under cover of dark, the loyalists took up positions within buildings in Bin Jawad, and on high ground around it, to ambush the outnumbered rebels as dawn broke.

Overwhelmed by superior firepower, the overextended rebel lines collapsed. Casualties and corpses were rushed away. “We recovered what the ambulance could bring,” said one doctor. “There are more but we can’t get to them now.” In Ras Lanuf, the loudspeakers of the mosque called for citizens to give blood at the hospital: “God will give you blessing—give blood.” A large man in long Arab robes raged for the youth to go and assist at the front line. “Go out and fight!” he said. “Go out and fight!”

In a corner, Bakr Mustafa Ali, 30, held his head in his hands. He and his brother had joined the rebel fighters that day. His brother had just died. “My family doesn’t know,” he said. “I don’t want to tell my mother on the phone.” After the onslaught, the resolve of the volunteers had dampened. “God willing, this is a good cause. God willing, I will keep fighting,” said one rebel, Ali, uncertainly in front of his fellow fighters. Some acknowledged that the further assault on Bin Jawad had been a mistake. “Some man, I guess he was in the army, spoke to us,” said one fighter. “He advised that we shouldn’t go forward. We were too excited—we went anyway.”

The civilian leadership of the rebels’ newly formed National Council has asked Maj.-Gen. Ahmed al-Gitriani, who turned his back on Gadhafi and went over to the rebellion, to reorganize the anti-Gadhafi forces. While wary of giving details, he says he is confident that the rebels can counter loyalist troops.

Defected members of the military are being ordered to step up to the task. But while the volunteers know they need greater coordination, they are wary of an army takeover. “There is no distinction of army, only the revolution,” says Miftah el Bughi, 55. “We are coming to fight. I have no army uniform, I have no weapon. I only have my clothes.”

The rebels deny that this is civil war. “Our men want a peaceful revolution,” says Khaled Saayah, spokesperson for the rebels’ Military Council. “We don’t want to project the same goals that Gadhafi is: indiscriminate bombing and crimes against humanity.” But against an opponent like the colonel, this uprising has never had the promise of a peaceful revolution. And with Gadhafi ruthlessly trying to put down the revolt in towns that rose up against him, the civil war may already have begun.