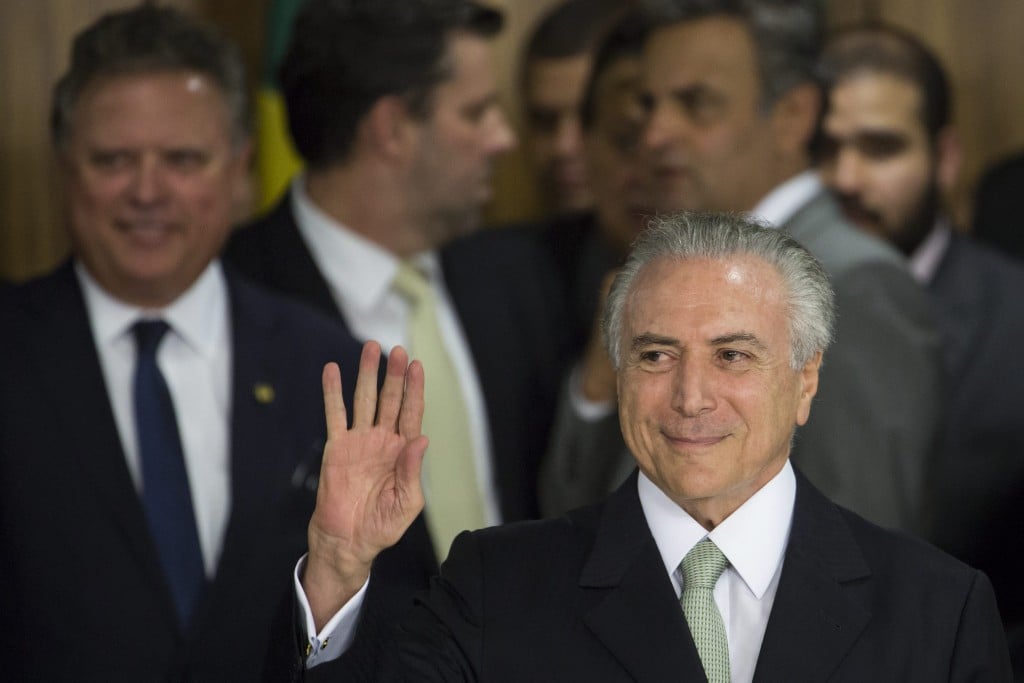 RIO DE JANEIRO – Secretly recorded conversations hit two more key allies of Brazil’s acting president Wednesday, leaving the country wondering if there are more taps that could affect the interim government after only 13 days in office.

The audios involve prominent members of the fractious Brazilian Democratic Movement Party led by Michel Temer, who took over the presidency after the Senate suspended President Dilma Rousseff pending an impeachment trial.

The first recording has Senate President Renan Calheiros proposing in a conversation with a former senator to weaken one of the key tools prosecutors have used to catch politicians and businessmen in a sweeping corruption scandal at the big state oil company Petrobras.

The second audio reveals former President Jose Sarney promising to help the same ex-senator overcome the probe into what prosecutors say was a multibillion-dollar bribery scheme involving Petrobras contracts. In it, Sarney also says “certain conditions” were negotiated with the opposition to replace Rousseff with Temer, her vice-president.

Transcripts and audio recordings of the conversations, published by the newspaper Folha de S. Paulo, seem likely to feed widespread suspicions that top lawmakers are trying to stifle the Petrobras investigation. They also could bolster Rousseff’s contention that the impeachment process was more of a political solution to the Petrobras scandal than a punishment for her alleged violation of fiscal rules.

In the first audio, Calheiros suggests legal changes to bar the use of plea bargains with people who have been arrested in the Petrobras case. Prosecutors have used such deals, offering lighter sentences to persuade suspects to implicate high-ranking businessmen and politicians, including Calheiros.

“You can’t make a plea deal while arrested. That’s the first thing,” Calheiros says in a wide-ranging conversation about the Petrobras probe with Sergio Machado, an ex-senator and former head of another state oil company, Transpetro. Machado also is being investigated.

The Supreme Federal Tribunal, Brazil’s highest court, is considering seven investigations against Calheiros in the Petrobras probe. Even so, in the recording, Calheiros says he could “negotiate” with the justices a “transition” from Rousseff to Temer. He didn’t provide details in the taped conversation.

Rousseff was suspended by a Senate impeachment vote earlier this month and Temer will be acting president while senators put her on trial within six months. A conviction would permanently remove Rousseff and Temer would serve out her term that runs to the end of 2018.

Calheiros’ office issued a statement acknowledging the conversation took place but insisting the comments “don’t reveal, indicate or suggest any mention or attempt to interfere with” the Petrobras probe.

Later Wednesday, Folha released the second recording in which Sarney promised Machado that he would work to keep the investigation of the former senator out of the hands of lower court judge Sergio Moro.

Moro, the lead judge on the Petrobras probe, has gone after many people who don’t hold federal elected offices or Cabinet positions. Only the Supreme Federal Tribunal can decide to try the latter.

Sarney, who is also the father of Temer’s environment minister, said in a statement that he was driven by “solidarity” for Machado. “I regret that private conversations become public because they can hurt others we would never want to reach,” he said.

Sarney also said that a plea bargain by executives at the giant Odebrecht construction company is a “machine-gun” against politicians of all political parties, including Rousseff. Calheiros agreed with that assessment in his audios.

The newspaper did not say when or by whom the recordings were made. However, on Wednesday, the Supreme Federal Tribunal announced that Machado had reached a plea bargain with prosecutors, making it a strong possibility he made the recordings.

The court did not provide details of the deal and Machado’s whereabouts could not be determined.

The audios came out two days after another recording released by Folha, also involving Machado, raised suggestions that this month’s impeachment and suspension of Rousseff was part of an attempt to stifle the Petrobras investigations.

That audio showed Romero Juca, a senator who was part of the Cabinet named to replace Rousseff’s, strategizing with Machado about impeaching Rousseff to stop “the bleeding.” Juca announced he was taking a leave of absence within hours after the recording was released.

Rousseff has repeatedly said the allegations that she broke fiscal rules in managing the federal budget are a cover for a “coup” aimed partly at limiting the Petrobras probe.

On Wednesday, the Senate’s impeachment commission was considering a timeline for Rousseff’s trial.

Sen. Antonio Anastasia suggested the final vote happen Aug. 2, only three days before the opening of the Summer Olympics in Rio de Janeiro. More than 100 heads of state are expected to arrive in the days before the games begin.

Rousseff allies have said a schedule should not be set until after her defence is sent to the commission next week.