Close to 50 people, including two police officers, were treated at hospitals across London with some suffering life-threatening injuries 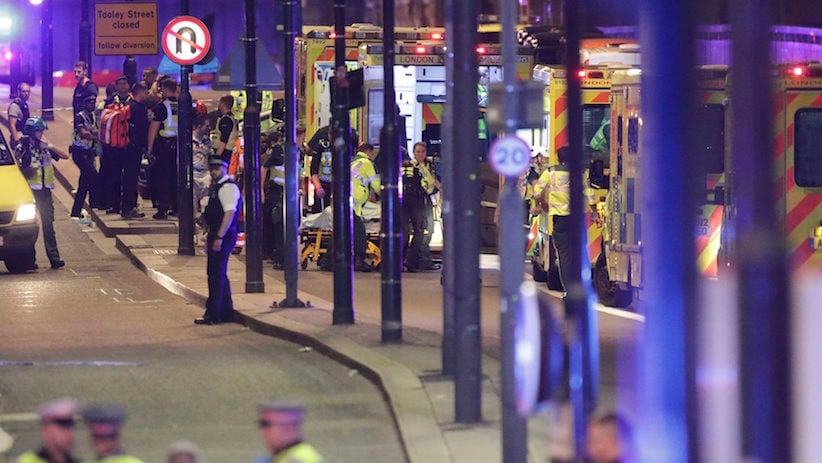 Emergency personnel tend to wounded on London Bridge after an incident in central London, Saturday, June 3, 2017. British police said they were dealing with “incidents” on London Bridge and nearby Borough Market in the heart of the British capital Saturday, as witnesses reported a vehicle veering off the road and hitting several pedestrians. (Yui Mok/PA via AP)

LONDON — British police arrested a dozen people Sunday over a vehicle and knife attack in London that left seven people dead, as Londoners told how a weekend night out in the city erupted into violence and terror, lightened by moments of kindness and acts of heroism.

The major political parties suspended campaigning in the country’s general election for the day, but Prime Minister Theresa May said the vote would take place as scheduled on Thursday, because “violence can never be allowed to disrupt the democratic process.”

The assault unfolded over a few terrifying minutes Saturday, starting when a van veered off the road and barrelled into pedestrians on busy London Bridge. Three men fled the van with large knives and attacked people at bars and restaurants in nearby Borough Market, police and witnesses said.

RELATED: The London attack: It’s getting harder to keep calm and carry on

“They went ‘this is for Allah’ and they had a woman on the floor, they were stabbing her,” said witness Gerard Vowls.

Romanian chef Florin Morariu, who works in the Bread Ahead bakery, said he saw people running, and some fainting, and then two people approach another and “began to stick the knife in … and then I froze and I didn’t know what to do.”

He said he managed to get near one attacker “and I hit him around the head” with a bread basket.

“There was a car with a loudspeaker saying ‘go, go’ and they (police) threw a grenade…. and then I ran,” he said. 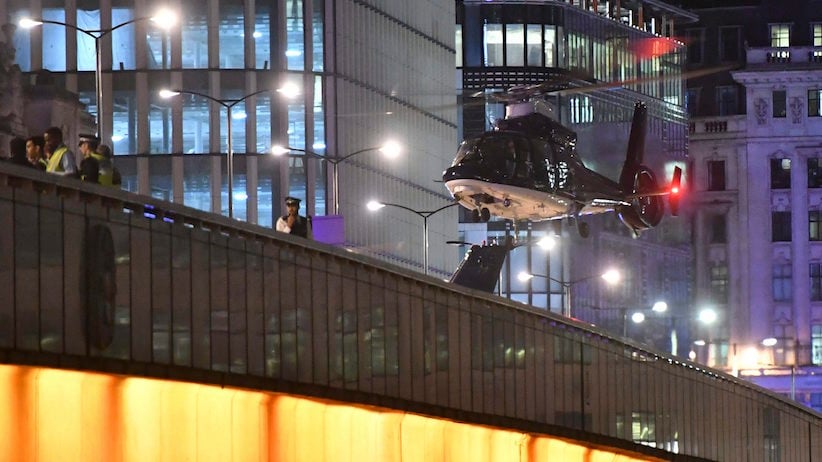 An helicopter lands on London Bridge after an attack in central London, Saturday, June 3, 2017. Armed British police rushed to London Bridge late Saturday after reports of a vehicle running down pedestrians and people being stabbed nearby.
(Dominic Lipinski/PA via AP)

London’s Metropolitan Police said armed officers fatally shot the attackers within eight minutes. The force said the men were wearing what looked like suicide vests that turned out to be fake.

Emergency officials said 48 people, including two police officers, were treated at hospitals across London. Some suffered life-threatening injuries. French and Spanish citizens were among the wounded.

The death toll of seven didn’t include the three attackers.

Police said counterterrorism officers raided several addresses in Barking, an east London suburb, and arrested 12 people there Sunday morning in connection with the attack. Neighbors at the site of one major raid in Barking said a man who lived there resembled one of the attackers shown in news photographs.

“He’s lived here for about three years,” resident Damien Pettit said. “He’s one of our neighbours. I’ve said hello in passing more than 50, 60 occasions. He has two young kids. He was a very nice guy.”

The rampage was the third major attack in Britain in the past three months, including a similar vehicle and knife attack on Westminster Bridge in March that left five people dead.

On May 22, a suicide bomber killed 22 people and injured dozens at an Ariana Grande concert in Manchester, in northwest England. Grande and other stars are scheduled to perform a benefit concert for victims under tight security in Manchester Sunday night.

May said the attacks weren’t directly connected, but that “terrorism breeds terrorism” and attackers copy one another. She said five credible plots have been disrupted since March.

“It is time to say, enough is enough,” she said.

Britain’s official terrorism threat level was raised from “severe” to “critical” after the Manchester attack, meaning an attack may be imminent. Several days later it was lowered again to “severe,” meaning an attack is highly likely. 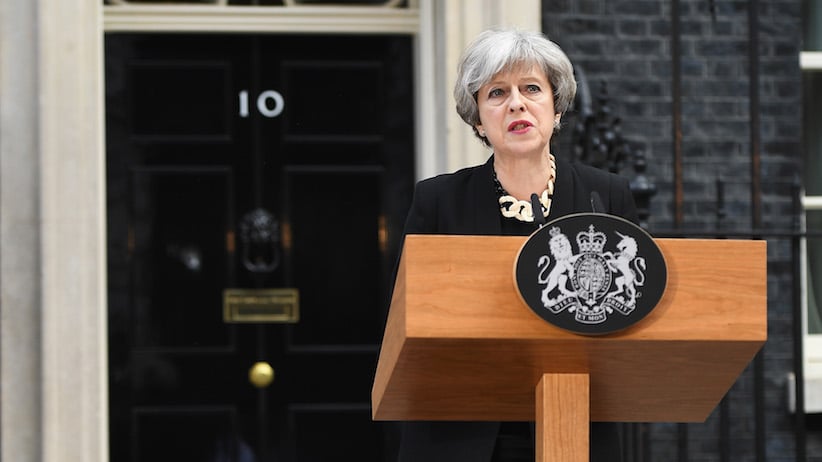 Home Secretary Amber Rudd said Sunday that the level would remain at severe because police believe there are no perpetrators still on the loose.

Assistant Commissioner Mark Rowley, the Metropolitan Police head of counterterrorism, said that while police believe all the attackers were killed, the investigation is expanding.

“We believe three people were involved, but we still have got some more inquiries to do to be 100 per cent confident in that,” he said.

A large area on the south bank of the River Thames remained cordoned off Sunday, and police told people to avoid the area. London Bridge and the adjacent train station, as well as nearby Borough subway station, were still closed.

Hours earlier the area packed with bars and restaurants around the foodie magnet of Borough Market, had been a scene of panic, as people barricaded themselves into pubs and restaurants or fled through the streets. Gunfire rang out as police shot the attackers—within eight minutes of being called out at 10:08 p.m. (2108 GMT), the Metropolitan Police said.

Medics treated the injured near the market as shocked people cried and shouted around them. Police officers yelled at people to run from the area, and blasts were heard as officers performed a series of controlled explosions.

Renan Marquese, a sous-chef at a tapas restaurant, said he was working when he heard chaotic sounds outside the restaurant. He opened the door only to see three bodies on the ground.

“When I open the door I see three dead people on the floor,” he said. “People running everywhere, police shouting to run away.”

He said that he helped a man and his partner, even taking the woman into his arms because she was too upset to walk properly. He said it took him 20 minutes to carry her across the bridge, stumbling all the way.

“It was really scary,” he said. 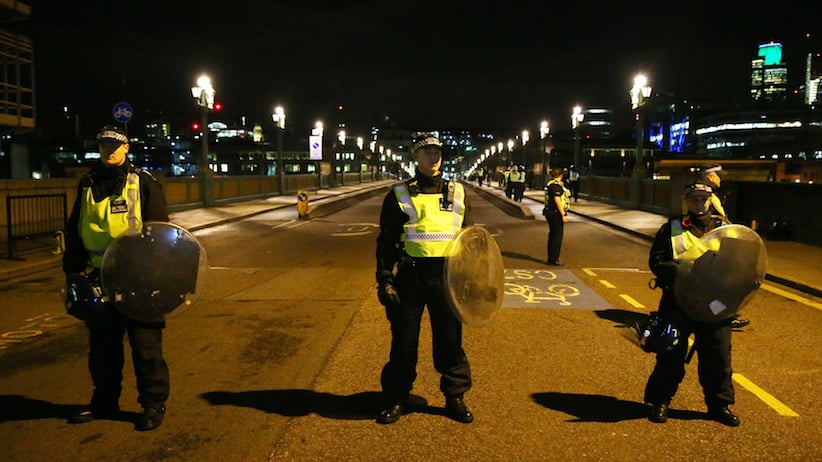 Amid the violence and fear were stories of compassion and heroism. British Transport Police said one of its officers, among the first to arrive, took the attackers on armed only with his baton, and was seriously injured. He was later described as being in stable condition with injuries that weren’t life-threatening.

Witnesses described how passers-by threw chairs and beer glasses at the attackers in an attempt to stop them.

Richard Angell, who was in a restaurant, said he looked out, “and opposite there’s a guy who is throwing a table at somebody and it’s very unclear about what is happening and it turns out to be a heroic guy who saw what was happening and just bombarded these terrible cowardly people with stuff.”

Vowls also saw people pelting the attackers, and said he joined in himself.

“They were trying to force their way into a restaurant,” he told ITV. “People were throwing bottles at them, pint glasses, whatever they could pick up. Then they went on the Wheat Sheaf (pub). … I went ‘Oi, oi cowards!’ — something like that to them. And then I started picking up bottles, I threw a chair at them a stool, glasses—anything I could get my hands on.”