Republicans embrace a doctrine of pessimism 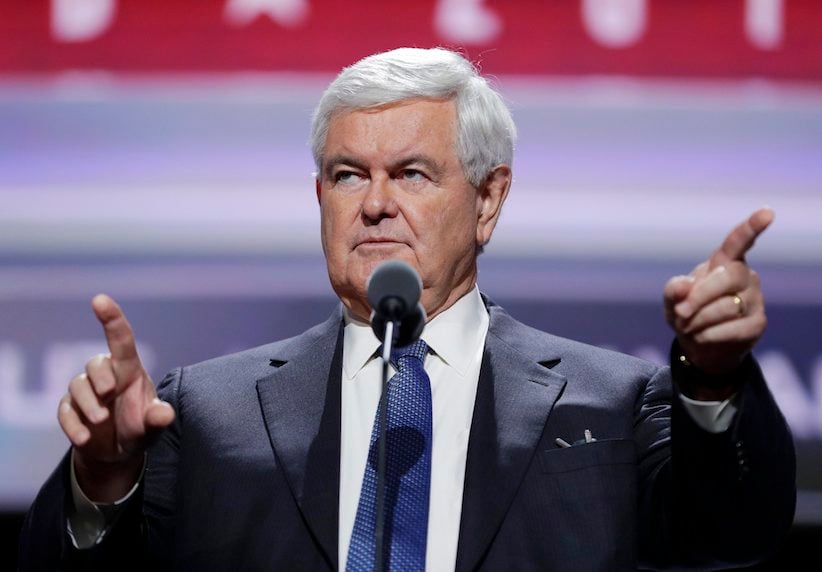 One of the many, many pieces of conventional wisdom Donald Trump trampled by winning the Republican nomination was that candidates need to be sunny and optimistic. The theory has usually been that winners outline a message of hope and change, like you-know-who. There have always been holes in this theory, but Trump all but obliterated it, winning on a message of apocalyptic pessimism: he was the only Republican who would tell voters that “America doesn’t win anymore,” that it’s been getting worse for a long time, and that the country needs someone to ward off its imminent destruction. Maybe he caught the mood of an era marked by pessimistic pop culture and a general sense that life is getting worse for some of the key Republican voting demographics. Whether he was lucky or smart, he tapped into a growing worldwide sense that life can’t get better for everyone, that we’re living in a zero-sum world where the best we can do is hold on to what we still have.

So the theme of the third night of the Republican convention, “Make America First Again,” was probably the most Trumpian so far. The opening statement by Florida Gov. Rick Scott helped set the tone: “I’m old enough to remember when terrorism was something that happened in other countries.” He was mocked for that line, but it probably has resonance for people who feel America has become a more dangerous place since 2001, and who see immigration as a way of importing the world’s problems to America. Those people aren’t just hard-core Republican voters.

The theme that America used to be great, that the best it can be is “great again” (as great as it used to be, not greater), turned up in a lot of ways. Laura Ingraham, rewarded for being one of talk radio’s biggest Trump boosters, said that things were bad when Ronald Reagan beat Jimmy Carter in 1980, but today they’re worse, and that Hillary Clinton is one of the people who helped “orchestrate America’s decline.” There was talk about the space program, a link to the era when it seemed America could do anything, go anywhere. Revivalist Dr. Darrell Scott warned: “At home, our growth is lethargic and our debt deeper; we are spiritually empty; and we are more divided now than ever before. Abroad we are neither respected nor feared by our adversaries.” And his speech was one of the happier ones, along with Eric Trump telling us what a neat guy his dad is.

There weren’t a lot of big names speaking, even by the standards of a convention that couldn’t draw a lot of star power. Instead, this was the night when conventional Republicans were forced to abase themselves before Trump and acknowledge him as leader. Most of them probably want to be president someday if Trump loses. And unlike Ohio Gov. John Kasich, who appears to be preparing for a 2020 run by boycotting the convention, they tried out future campaign sound bites in the guise of convention speeches.

So Scott Walker tried out “America deserves better” as a slogan. Mike Pence confirmed his reputation as the most boring man in the world, and when he tried to imitate Trump’s over-imitated catchphrase “uuuge,” he couldn’t even pronounce it right. Ted Cruz delivered a laundry list of his pet causes, regardless of whether or not Trump cares about them. His line about America deserving leaders who will “cast aside anger for love” was seen as a possible slam on Trump, or at least something he can point to in 2020. And telling people to “vote your conscience,” rather than telling them to vote for Donald Trump, was widely interpreted as an insult to Trump, though he will surely deny it. Trump doesn’t seem to mind that most establishment Republicans haven’t quite endorsed him; it’s enough that they kneel before him. These speeches may help these guys in the future, but they’re not really going to help or hurt Trump.

Newt Gingrich was probably the most effective of the bunch, maybe because he doesn’t really have a shot at the nomination (or maybe because he was followed by Paul Ryan introducing Mike Pence, and then by Mike Pence, and compared to those guys, anyone would seem effective). Despite his cheery delivery, he nailed the pessimistic mood of the night. In contrast to Obama’s statements that ISIS is not really that strong — statements that have been much-mocked by Republicans — Gingrich warned that radical Islamists “are stronger than we admit,” and that the Democrats are lying about how much danger America is in. “We are losing the war,” he said, a statement that he’d probably have denounced as unpatriotic in 2004. Much of his speech was devoted to talking about terrorist attacks, murders and rapes that happened overseas: in Germany, in France, in Bangladesh. He warned of a nuclear Iran, of Syrian refugees and illegal immigration and, of course, Hillary Clinton. The message was apocalyptic, but clear and effective: the world is dangerous and getting more dangerous by the day; the problems of the world are being imported to America’s shores by Democrats. Vote Trump and he’ll keep America safe, not just in the sense of being safe from attacks, but safe from the impending collapse of Western civilization.

It’s easy to underrate the power of this message. It’s not a message that has had much purchase in the Republican party in the last decade or so. Men like George W. Bush and John McCain believed in internationalism: muscular displays of American power combined with generally pro-immigration attitudes. The Iraq invasion helped discredit this way of looking at the world, and while it confirmed the foreign-policy views of liberals like Obama, it also confirmed a different world view: that America is the last hope of a hopeless world, that Iraq didn’t work because American values can’t be exported, and that America needs to hide from the world. It’s sometimes referred to as an “isolationist” world view, and it is that in part. Rooted in the idea of staving off decline, it’s not incompatible with foreign-policy hawkishness (and the mood of this convention is very hawkish).

Unlike the “lock her up!” attacks on Hillary Clinton, which might just turn off swing voters, this is something that really may have appeal beyond the Republican base. As the Brexit vote proved, a lot of people are receptive to the idea that immigration and globalism are better for elites than for them. Nostalgia has an appeal that can’t be countered by lectures on the racial component of nostalgia; if someone was happier in the America of the 1950s, the last thing that will sway that person is an explanation of how much worse things were for other groups. That just reinforces the idea of a zero-sum world, where gains come at the expense of losses. The Democrats will need to make sure that voters don’t wind up converted to this doctrine of pessimism as Republicans determinedly peddle the Clubber Lang doctrine: “I will destroy any man who tries to take what I got.”