Republicans use midterm elections to wrest control of the Senate, giving it the majority in both chambers of the U.S. Congress 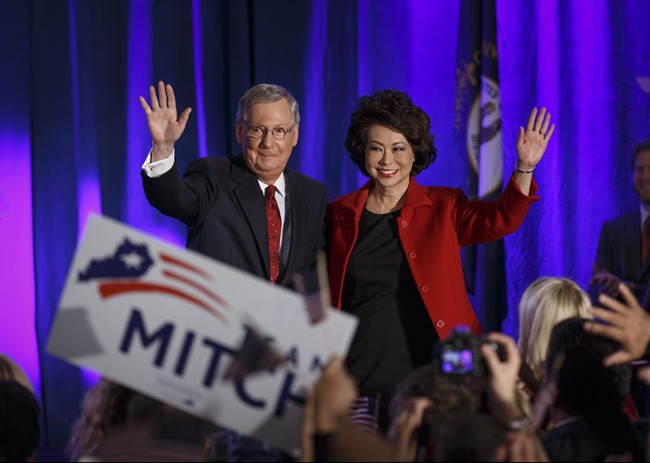 WASHINGTON – The Republican party has real power again in Washington and must now decide how to use it: try governing with President Barack Obama, or seek to destroy what’s left of his presidency.

The party completed its eight-year comeback from legislative opposition by grabbing control of the Senate in Tuesday’s midterms, giving it the majority in both chambers of the U.S. Congress.

The Republicans can now create bills; get them through Congress; and send them to the president’s desk in the hope he’ll sign them into law — power they did not enjoy in the last four congresses where they were either stuck in opposition or, more recently, stuck in a stalemate against the Democratic-controlled Senate.

They could use their power in other, more aggressive ways.

A party with a Senate majority can block nominees to the courts, to cabinet, and to ambassadorships. It can compel witnesses to testify at hearings. It can pack poison pills into legislation and try force-feeding them to the president — a major budget bill, perhaps, laced with a little toxin that might weaken Obama’s signature health reform.

The grassroots will press its leaders to fight. In his victory speech, though, the new Senate leader promised to be constructive.

“We do have an obligation to work together on issues where we can agree. I think we have a duty to do that,” Mitch McConnell said at a party in Kentucky, where he easily defeated a Democratic challenge to his seat.

“Just because we have a two-party system doesn’t mean we have to be in perpetual conflict. I think I’ve shown that to be true, at critical times in the past. I hope the president gives me the chance to show it again. There’s so much we can, and should, do for all Americans.”

Some of the most fertile ground for compromise happens to touch Canada.

— Free trade: Republicans will almost certainly give the president fast-track authority to negotiate new trade deals, notably the Trans-Pacific Partnership with 12 countries including Canada. Obama didn’t even get that from his own party, as Senate Democrats are divided on free trade. The Government of Canada has been awaiting this development, reluctant to conclude negotiations without the absolute confidence that Obama has the authority from his own legislature to make a deal.

— Keystone XL: Republicans have declared that a top priority will be pushing Obama to approve the long-delayed Alberta-linked oil pipeline. In fact, it’s often the very first thing Republicans mention when asked what they’d do with a new congressional majority.

— Timmies’-inspired tax reform: Calls for an update to the tax code spread like wildfire this summer, after the shock of Burger King moving to Canada in a merger with Tim Hortons. There appears to be bipartisan support for making U.S. corporate taxes more competitive, although there’s no consensus on the details.

Obama is expected to meet Friday with the Republican leadership at the White House.

But there’s a determined impediment to deal-making in Washington. It’s called the tea party. In a potential preview of the next two years, its loudest voices have already launched a pre-emptive strike against their own leadership.

One right-wing radio host, far from celebrating the impending victory, was screaming into the microphone as he vowed to millions of listeners to attack the party brass.

“They have a surprise coming. They have an ass kicking coming. For now, we’re going to ride their horse, to ride the devil out of town, (Democrat Senate Leader) Harry Reid. But when we’re done with that, we re-focus on (the Republican leadership),” radio host Mark Levin told listeners, the day before the vote.

“They say we’re going to be a responsible governing majority. You know what that means?… Capitulation.”

What conservatives want, Levin said, are congressional investigations into Obama-era scandals. They want to scrap Obamacare. They want anything but legislative footsie with the detested Democrat.

All of this made for a depressing presidential anniversary for Obama.

The midterms cruelly coincided with the date, Nov. 4, 2008, when American voters said, “I do,” to their first black president, handing Obama a decisive win on the heels of a euphoric campaign of hope-and-change.

Any hope of change, at least through progressive legislation, now appears to have been emphatically extinguished for the duration of the Obama era.

It would be premature to write his political obituary.

The occupant of the Oval Office retains mighty tools in his presidential kit: He can still issue executive orders to government agencies. He can veto bills. And his Democrats have more than enough votes to filibuster most types of legislation, to keep it from ever even reaching his desk.

To use a basketball analogy, however, the hoops-loving commander-in-chief will, in the final quarter of his presidency, need to make a peremptory pivot to put any points on the board.

He’d need to turn to Republicans. They’ll decide which of his nominations get approved. They’ll decide not only which bills get through Congress, but which ones even make it to the floor for a vote.

“I know that Barack Obama is a very competitive person. And I know that he will look at the final two years of his presidency as an opportunity to secure his legacy by getting some things done,” said his former spokesman Jay Carney, now a CNN analyst.

“And if the only way to get something done is by reaching out, and trying to find bipartisan compromise with a Republican Congress, I believe he will try to do that.”

Obama’s own unpopularity affected the race. Democrats refused to campaign with him, speak about him, or in the case of Kentucky’s Alison Grimes even admit voting for him.

The president’s approval ratings aren’t actually too bad, at just over 40 per cent. But they were particularly woeful in many of the places up for grabs in this election cycle. Obama has called it the toughest electoral map for his party in 50 years: a perfect storm of incumbent Democrats, trying to hold seats in so-called purple states, in the sixth year of a presidency, when presidential parties almost always lose seats, in a midterm year when the electorate is older, whiter and less Democratic.

Speaking of ex-presidents, a somber prophecy of Lyndon Johnson’s came to its fullest fruition Tuesday.

Fifty years ago Johnson gloomily predicted that thanks to a civil-rights law, Democrats would lose the South, until then their perennial stronghold. On Tuesday, the party lost its last remaining seat held by a white southerner, in the 435-seat House of Representatives. Georgia’s John Barrow had been something of a political relic, in a majority white district in the Deep South. Like some other fellow Democrats running in conservative parts of the country, he was crushed.

On the bright side for Democrats, the map looks better in 2016.

Next time it’ll be Republicans defending seats they won in swing states in 2010. And the electorate will likely be younger in a presidential election year — showing up to cast their ballots for the Democratic nominee, perhaps Hillary Clinton.