Rethinking Cuba and the U.S. embargo

Washington concedes its Cuba policy has failed, and it finally seems ready to change tack 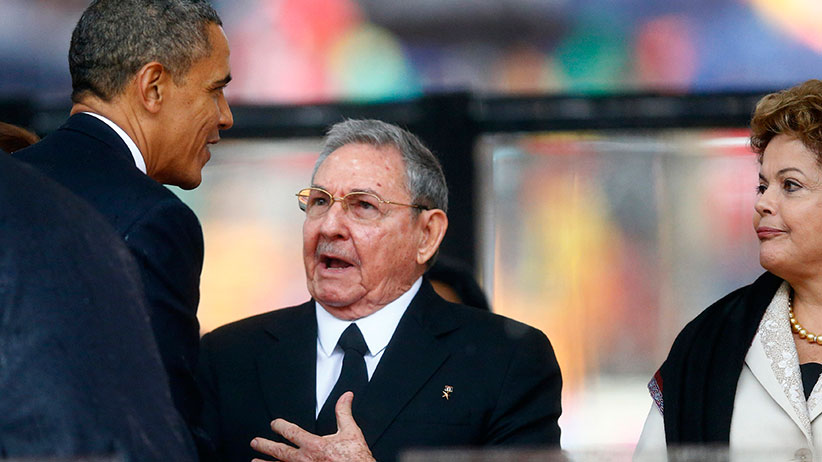 Update: Today, Cuba released USAID contractor Alan Gross after five years behind bars in Havana. And the United States agreed to free three Cuban spies convicted in Miami in 2001. The exchange marked the first step in ending the diplomatic chill between the two nations that dates back to the early 1960s. Presidents Barack Obama and Raul Castro were to speak to their respective nations at noon to announce the beginning of talks aimed at normalizing relations, including the restoration of full diplomatic ties and the easing of restrictions on American travel to the communist-run Caribbean island.

In September, scores of Cuban-Americans filled a Miami lecture hall to talk reconciliation. Speakers included a Kosovo independence leader on the need to prepare ahead for uncertain change, and a top U.S. diplomat on how lessons learned in the Middle East apply to Washington’s half-century feud with the Castro government. It was the third time in as many years exiles gathered to discuss burying the hatchet.

So if those scarred by Cuba’s 1959 revolution can talk about ending Cold War-era hostility across the Florida Straits, why can’t the U.S. government do the same? Cuban-American hardliners in Congress are partly to blame, as are the Castro brothers. But with bruising mid-term elections and bold executive action on immigration behind him, there is reason to believe President Barack Obama could soon extend an olive branch.

At issue is the U.S. embargo. Imposed in the 1960s as punishment for the nationalization of U.S. businesses, it was tightened in the 1990s as Cuba reeled after the Soviet Union’s collapse. “The expectation that we force starvation and need on the Cuban people so that they will then rebel and bring about regime change—I find that absolutely unethical,” says Carlos Saladrigas, a businessman who backs the reconciliation conferences.

Polls now show a majority of Americans and even Cuban exiles in Florida want Washington to change tack. Even Obama concedes the policy has failed and is in need of a “creative” update. But thanks to Bill Clinton, it takes a majority vote in Congress to lift the embargo. By signing the Helms-Burton Act in 1996, he ceded presidential authority to set Cuba policy. Of course, it was Fidel Castro’s decision a month earlier to shoot down two exile-piloted planes that forced Clinton to bow to hardliners. Now, though Raúl Castro has eased some of the restrictions his brother Fidel imposed, his government has made moves that give even moderate Cuban-Americans pause. “I think it has engaged in certain activities that should not be seen as to be rewarded by the U.S.,” says George Montalván, a former chief economist at the Organization of American States, citing a cache of arms concealed in sugar sent to North Korea last year and a military pact signed with Russia this summer.

But questioning the embargo is no longer a third rail for U.S. politicians. Republicans like House representatives Ileana Ros-Lehtinen and Mario Diaz-Balart—whose aunt was Fidel Castro’s first wife—are unflinching defenders of isolating Cuba, as is Sen. Marco Rubio. But two years ago, Joe Garcia took a moderate stand and became Florida’s ﬁrst Cuban-American Democrat to win election to the House. Though his tenure was brief—he was narrowly defeated in November’s midterms—the state’s electorate is tilting toward engagement. Charlie Crist ran in opposition to the embargo and came close to reclaiming the governorship. He lost by just 1.4 per cent overall but captured about half the Cuban-American vote, consistent with Obama’s gains among exiles since 2008.

Perhaps more important than public sentiment in freeing the President’s hand are internal Democratic dynamics. With Republicans seizing control of the Senate, New Jersey hardliner Robert Menendez, a Democrat, has lost his soapbox as foreign-relations committee chairman, meaning Obama won’t face as much friendly fire for acting on Cuba. And Hillary Clinton has said she wants the embargo scrapped, meaning Obama won’t harm his likely successor on the 2016 ticket by reaching out to Havana. Options include removing Cuba from the state-sponsors-of-terror list; swapping three imprisoned Cuban spies for an American aid contractor behind bars in Havana; restoring full diplomatic ties; or expanding opportunities for U.S. citizens to travel to Cuba and help finance its emerging private sector.

There is a growing expectation among exiles that Obama will take at least one of those steps. “I think there will be meetings in Washington and a lot of changes coming down the pipeline,” says Antonio Zamora, a lawyer and Bay of Pigs veteran who now visits Cuba regularly. The Summit of the Americas in April also presents an opportunity: Host Panama has invited Cuba for the first time, despite it being the region’s only democratic outlier. The White House has yet to announce whether the President will attend. But since exiles have put their hostility behind them, and since the U.S. is co-operating with Cuba—and even praising its efforts—in the fight against Ebola, odds are Obama will at least sit at the table with his former foe.