Charlene Wittstock, set to marry Prince Albert, is joining a clan with more scandals per kilometre than any other royal family

Wearing a sleek black Speedo suit, her long blond hair tucked into an orange cap, Charlene Wittstock strode out of the water in Kwazulu Natal, South Africa, on Feb. 12, looking more like the competitive swimmer she used to be than the royal bride she is. She’d just completed the Midmar Mile, a massive open-water swim, and helped raise $80,000 for the Special Olympics. In July, the statuesque South African beauty marries Monaco’s reigning prince, Albert II, and becomes his princess consort. Monaco hasn’t had a princess consort in almost 20 years, since Albert’s mother, Princess Grace, died in 1982. Like Grace, an American who gave up an Oscar-winning acting career upon her marriage to Prince Rainier, Wittstock, 33, is an English-speaking outsider to the tiny, ultra-exclusive Mediterranean playground for the rich and famous.

She’s also scandal-free, something that certainly does not apply to her 52-year-old groom or his sisters Caroline and Stephanie. For decades the Grimaldi family has hit the headlines with trashy tales of wildly unsuitable lovers, broken marriages and brawls. Indeed, illegitimacy and shotgun weddings are almost de rigueur: of the three siblings’ nine children, five were born out of wedlock while two others arrived less than nine months after their parents’ nuptials. Their shenanigans make those of Queen Elizabeth II’s four children look positively tame: while three first marriages of the Windsor kids broke down spectacularly, currently Charles and Anne have second spouses and Edward is still with his original wife, while Andrew never remarried. And certainly no illegitimate children have appeared.

In contrast, Albert, a lifelong bachelor, confessed, mere weeks after his father died in 2005 and he’d assumed power, that he’d fathered a boy, Alexandre, then three, with a Togolese flight attendant. The revelation at least put to rest the rumours that he was gay, which had dogged him for years. He hinted on French TV that there were other progeny. “I know there are other people who are in more or less the same situation. We will give them an answer at the appropriate time.” Then, in 2006, he acknowledged his 14-year-old daughter, Jazmin Grace, the result of a vacation fling in 1991 with a married Californian, Tamara Rotolo. Neither illegitimate child can inherit the throne. The revelations only put Albert on par with his headline-grabbing sisters. 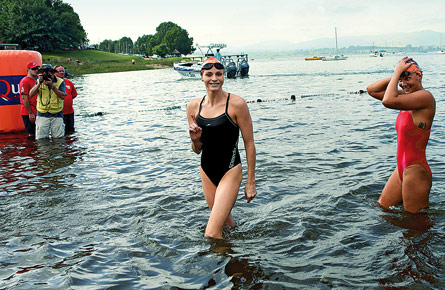 Caroline, the oldest, hit the scandal sheets first when she wed philandering playboy Philippe Junot at 21. The marriage soon crumbled. Her second, to Italian heir Stefano Casiraghi, was hastily organized just before their son, Andrea, was born. Two more children followed before her husband died in a speedboat accident. A few years later Caroline took up with a married German prince, Ernst of Hanover. Soon his wife, unable to tolerate such blatant infidelity, was gone. Daughter Alexandra arrived six months after their 1999 nuptials. The marriage hasn’t been idyllic. Ernst was photographed urinating at the Hanover Expo—he tried to diffuse the diplomatic scandal with a jaw-dropping apology: “I did indeed relieve myself during my visit to Expo 2000, but neither against the wall of the Turkish pavilion nor on the soil of the Turkish state”—and has spent an inordinate amount of time in courts for fighting and assault charges. Last year he was fined $260,000 after being found guilty of grievous bodily harm for hitting a fellow German at a Kenyan resort.

While Caroline could live with those incidents, she couldn’t ignore his wandering eye. As billionaire philanderer James Goldsmith famously said, “When you marry your mistress, you create a job vacancy.” Tabloids have delighted in splashing pictures of Ernst and his paramours, including recent snaps of the prince with Simona, a Romanian dancer who also models for a chain of Austrian brothels. Though there’s been no official separation or divorce, Caroline, 54, and Alexandra have quietly moved back to Monaco. Claire Lathbury, a Monaco-based writer for the Riviera Times, credits her with being a “fantastic mother.” Indeed, her children, three of whom are grown up, have avoided the nasty headlines that plagued Caroline. 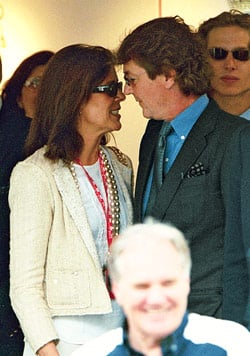 Stephanie, 46, also seems to have settled down. Last summer, the princess watched as daughter Pauline Ducruet, then 16, finished 12th in the three-metre springboard in the Youth Olympic Games in Singapore. It was a very different Stephanie from the one the world had seen in her wild-child days. “From Tiaras to Trailer Parks,” screamed one absolutely accurate headline, as her singing and fashion careers imploded in the 1980s along with her love life. She started early in accumulating an astonishingly long list of lovers of dubious repute, including a few of the male servants at the family palace. In May 1992, Stephanie, then 27, shocked Monaco by announcing she was pregnant by her divorced former bodyguard, Daniel Ducruet. They had two children before getting married in 1995, but wedded bliss was short-lived, ending after he was photographed in an X-rated position with Miss Topless Belgium. Soon Stephanie was pregnant again. Her security chief, Raymond Gottlieb, is widely believed to be the biological father of Camille, though no name is on the birth certificate.

Later, Stephanie took up with a married elephant trainer and circus owner, Franco Knie, and took off on a cross-Europe trip, living with her children in Knie’s caravan while pitching in at circus work. She quickly tired of feeding the animals and in 2003 married a trapeze artist named Adans Lopez Peres, though German papers say she was soon divorced again. Today she focuses on raising her kids, her charity work, and is often seen shopping in a local supermarket, Lathbury says.

Recent rehabilitations aside, the Grimaldi clan has been responsible for more scandals per square kilometre than any other royal family in Europe. But then the family’s less-than-salubrious goings-on extend back to 1297, when a Genoese pirate, Francesco Grimaldi, and a group of mercenaries dressed as monks, talked their way into the fortress at Monaco, slaughtered the inhabitants and Grimaldi installed himself in power. From that moment, survival has meant suborning everything for a future. In 1919, the heir to the throne, Louis was unmarried. So he adopted and legitimized Charlotte Louvet, his daughter with a cabaret singer. Charlotte’s son, Rainier, became the ruler in 1949, and in turn, left his true love, Gisèle Pascal, because she couldn’t have children. After marrying Grace Kelly in 1956, the pragmatic Rainier transformed the tiny, near-bankrupt Mediterranean backwater into a tax haven with the help of another short, dumpy man, Aristotle Onassis. And in 2002, worried that his still unmarried son, Albert, would leave Monaco heirless, Rainier got the constitution changed so Caroline, and then her children, could inherit the throne.

Albert’s life has been relatively stable by his sisters’ standards. When younger, the rapidly balding middle child was often hurling himself down bobsleigh courses at Winter Olympics or trekking in the Arctic. His once trim figure has grown decidedly paunchy. In his accession speech he vowed to place “morality, honesty and ethics” at the centre of the government’s concerns. Recently, Monaco has gotten itself off the Organisation of Economic Co-operation and Development’s uncooperative tax-haven lists. 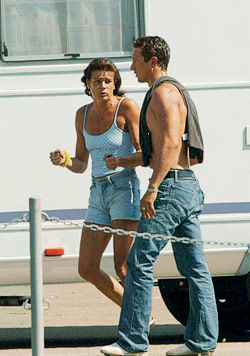 Even his romance with Charlene Wittstock began in a rather more dignified way. Their relationship started quietly before bursting onto the public stage. Wittstock’s life has been dominated by years of exhausting swim practices and competitions. In 2000, the same year she placed fifth in the 4 x 100 medley at the Sydney Summer Olympics, the 22-year-old was introduced to Albert, then 42, at an aquatic event in the mini-state. She was smitten from the start. “The moment I met Albert, I felt a profound sense of destiny,” she said in a recent cover story in Tatler. “I have been quoted as saying I felt weak at the knees. That is a slightly trite way of phrasing it, but it is true—I knew he was the one.” In 2007, injuries ended her swimming career and she moved to Monaco full-time. The transition to being a public figure was reportedly rough. Her wardrobe quickly improved—she wears a lot of Armani, and the Italian is designing her wedding dress—but she felt isolated. Some four years later, she confessed to Tatler, “Although I have met some wonderful people since I’ve been living in Monaco, I regard them all as acquaintances. I only have two people I consider friends here.” Though Wittstock’s got a reputation for being “clearly determined and hard-working,” particularly about her charity work, Lathbury says that only recently is “she relaxing more into [her] role.”

Whether she can return Monaco to the glamorous days when Princess Grace enchanted the world is unclear. Majesty magazine’s managing editor, Joe Little, isn’t expecting saturated media coverage for Monaco’s wedding like that facing Prince William and Kate Middleton. Monaco is “a bit Ruritanian” and “teeny-weeny” for that, he says.

The couple hasn’t helped spark interest in their outdoor religious nuptials on July 2. In Tatler, Wittstock spoke of Albert’s generosity, charm and caring but never mentions love. The most effusive she gets is: “He’s perfect for me in every way. I respect him and understand him.” Albert is just as circumspect. Shortly after slipping a mammoth three-carat diamond ring on Wittstock’s finger, he talked of finding “peace and contentment” and praised her “solid personality built on the values of sports.” Lathbury, who’s seen them a couple of times in the past year, reports: “They seem very together and happy.” Still, even thinking of marrying a man two decades her senior who also heads a scandal-plagued family has to be daunting prospect. As Majesty’s Little delicately phrases it: “You would like to think that she knows exactly what she’s doing.”