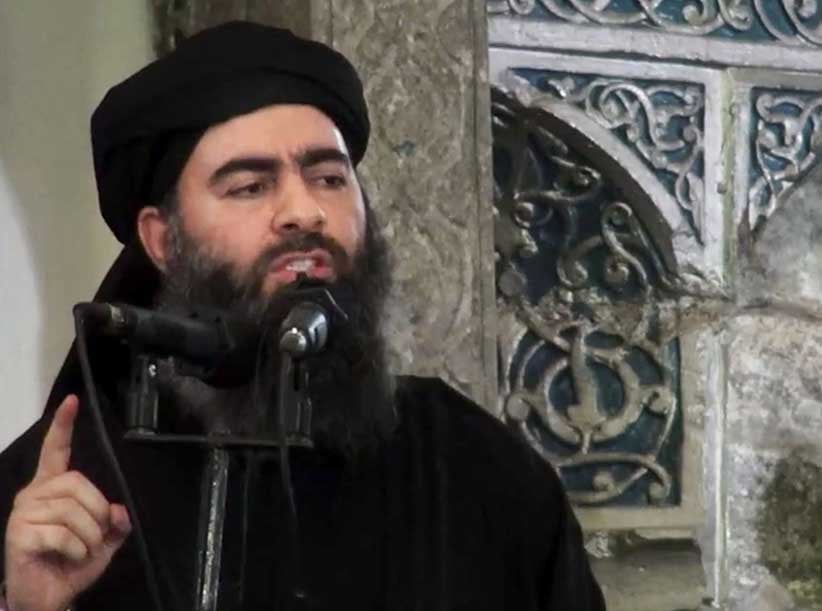 A file image made from video posted on a militant website Saturday, July 5, 2014 purports to show the leader of the Islamic State group, Abu Bakr al-Baghdadi, delivering a sermon at a mosque in Iraq. (AP)

BEIRUT — Russia said Friday it was verifying whether it had killed the leader of the Islamic State group in an airstrike targeting a meeting of IS leaders just outside the group’s de facto capital in Syria, dealing a potentially severe blow to the extremist group as it fights to hang on to its strongholds in Syria and Iraq.

The Russian Defence Ministry claimed that Abu Bakr al-Baghdadi was killed in a Russian strike in late May along with other senior group commanders, adding that the information about his death was still “being verified through various channels.”

Asked later about that claim at a news conference in Moscow, however, Russian Foreign Minister Sergey Lavrov said: “I don’t have a 100-per cent confirmation of the information.”

There had been previous reports of al-Baghdadi being killed but they did not turn out to be true. The IS leader last released an audio on Nov. 3, urging his followers to keep up the fight for Mosul as they defend the Iraqi city against a major offensive that began weeks earlier.

The spokesman for the U.S.-led anti-IS coalition said in a statement Friday he could not confirm the Russian claim.

The report of al-Baghdadi’s death comes as IS suffers major setbacks in which they have lost wide areas of territory and both of their strongholds — Mosul in Iraq and Syria’s Raqqa. Both are under attack by various groups who are fighting under the cover of airstrikes by the U.S.-led coalition.

As the militants take a pounding in their eroding strongholds, U.S. officials and Syrian activists say many commanders have fled Mosul and Raqqa in recent months for Mayadeen, a remote town in the heart of Syria’s IS-controlled, Euphrates River valley near the Iraqi border. Their relocation could extend the group’s ability to wreak havoc in the region and beyond for months to come.

Most recently, the group claimed responsibility for attacks in Iran’s parliament and a shrine to revolutionary leader Ayatollah Ruhollah Khomeini in Tehran, killing at least 17 people and injuring more than 50. It also claimed responsibility for the June 3 London attack that killed eight people. Both attacks would have taken place after al-Baghdadi’s alleged killing.

Lavrov, at the press conference, added on a cautious note that if al-Baghdadi’s death is confirmed, its importance mustn’t be overestimated. Lavrov said that “past examples of similar actions to strike the leadership of terrorist groups were presented with much enthusiasm and pomp, but the experience shows that those structures later regained their capability.”

The claim of al-Baghdadi’s possible demise also comes nearly three years to the day after he declared himself the leader of an Islamic caliphate in Iraq and Syria, from a historic mosque in Mosul.

If confirmed, al-Baghdadi’s death would mark a major military success for Russia, which has conducted a military campaign in support of Syrian President Bashar Assad since September 2015.

It is not clear who would replace al-Baghdadi if he was killed — the group has lost many of its senior commanders, killed in U.S.-led airstrikes, including Fadhil Ahmad al-Hayali, said by U.S. officials to be the No. 2 leader of the group. Al-Hayali was killed in an August 2015 airstrike by the U.S. in Iraq. Another top figure was Abu Ali al-Anbari, the extremist group’s leading finance official who was killed in 2016.

The Defence Ministry said the air raid on May 28 that targeted an IS meeting held on the southern outskirts of Raqqa in Syria also killed about 30 mid-level militant leaders and about 300 other fighters.

The ministry said the IS leaders were gathered to discuss the group’s withdrawal from Raqqa, the group’s de facto capital. It said the military began planning the hit after getting word that the group’s leadership was to meet in order to plan IS’s exit to the south.

The Russian military sent drones to monitor the area and then dispatched a group of Su-34 bombers and Su-35 fighter jets to hit the IS gathering.

“According to the information that is being verified through various channels, IS leader Abu Bakr al-Baghdadi also attended the meeting and was killed in the airstrike,” the military said in a statement.

The Defence Ministry added that it had warned the U.S. of the coming strike.

Syrian opposition activists reported airstrikes on May 28 south of Raqqa that killed more than a dozen people.

The Britain-based Syrian Observatory for Human Rights, which tracks Syria’s war, said airstrikes on the road linked the villages of Ratla and Kasrat killed 18 people while the activist-operated Raqqa is Being Slaughtered Silently said 17 civilians were killed in the airstrike on buses carrying civilians.

The Observatory said the dead included 10 Islamic State group members. It did not elaborate at the time.

The Russian ministry said that among other militant leaders killed in the raid were IS leaders Abu al-Khadji al-Mysri, Ibrahim al-Naef al-Khadj and Suleiman al-Shauah.

Al-Baghdadi declared a caliphate in Syria and Iraq in June 2014 days after his fighters captured Mosul, the largest city they ever held. The group has since horrified the world with its atrocities in areas they held as well as attacks they claimed around the world that killed hundreds.

Al-Baghdadi is a nom de guerre for a man identified as Ibrahim Awwad Ibrahim Ali al-Badri al-Samarrai. The U.S. is offering a $25 million reward for information leading to his death or capture.

Alexei Pushkov, the head of the committee for information policies at the upper house of the Russian parliament tweeted that “if confirmed, al-Baghdadi’s death will be a powerful blow to the IS. It has been retreating on all fronts, and the death of its leader will accelerate its demise.”