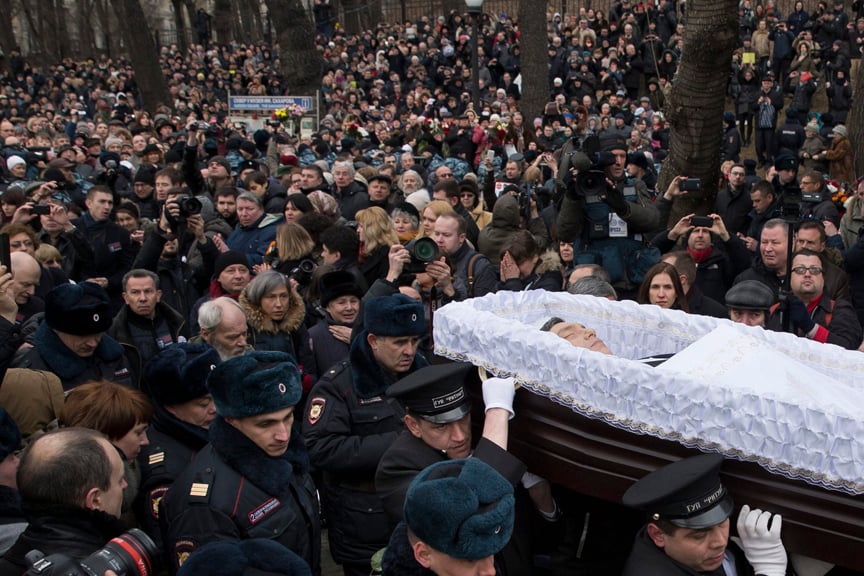 People follow the coffin of Boris Nemtsov during a farewell ceremony at the Sakharov center in Moscow, Russia, Tuesday, March 3, 2015. (Pavel Golovkin/AP)

MOSCOW — A Russian court on Sunday charged two men in the killing of leading opposition figure Boris Nemtsov and ordered three other suspects to remain in jail pending a decision on whether to file charges.

Russian news agencies said one of those charged has admitted involvement in the crime.

Judge Nataliya Mushnikova said that Zaur Dadaev made a statement confirming his guilt, according to reports by state news agencies Tass and RIA-Novosti, and the independent Interfaxe. They did not specify his alleged actions. Tass said Dadaev did not acknowledge guilt in his courtroom appearance, but only asked for a fair trial.

Dadaev is one of two suspects whose detention was announced Saturday in the first significant development of the investigation. The other, Anzor Gubashev, was also charged Sunday, but told the court he was not guilty.

Three other suspects, whose detention was made formally known only when they showed up in the court, were remanded to jail but there were no immediate charges. They include Gubashev’s younger brother Shagid, along with Khamzad Bakhaev and Tamerlan Eskerkhanov, Tass reported.

Dadaev and the Gubashevs were arrested in Ingushetia, a small republic in Russia’s tense North Caucasus on Saturday, and the other two in suburban Moscow before dawn on Sunday, officials said.

Dadaev served in a battalion of Interior Ministry troops in neighbouring Chechnya, Ingush Security Council secretary Albert Barakhoev was quoted as telling Russian agencies. He said Gubashev had worked in a private security company in Moscow.

Law enforcement officials have asserted the guilt of all five, but have not released any details of how they allegedly were involved in the Feb. 27 killing of Nemtsov.

The 55-year-old former deputy prime minister, who became an adamant critic of President Vladimir Putin, was shot dead as he walked on a bridge near the Kremlin with a companion. The shooting occurred a few hours after he had made a radio appearance denouncing Putin for “mad, aggressive” policies in Ukraine.

Nemtsov was working on a report detailing Russian involvement in the war between pro-Russia separatist rebels and Ukrainian forces, associates said.

Nemtsov’s killing shocked Russia’s already beleaguered and marginalized opposition supporters. Suspicion in the opposition is high that the killing was ordered by the Kremlin.

But Russia’s top investigative body said it was considering several possible motives, including that he was killed in an attempt to smear Putin’s image. It also said it was looking into possible connections to Islamic extremism and Nemtsov’s personal life.

Chechnya, where Dadaev reportedly worked, was wracked by two wars over the past 20 years between Russian forces and separatists increasingly allied with fundamentalist Islam. Although the insurgency died down in Chechnya several years ago, attacks attributed to Islamic militants sporadically occur in nearby regions.

Chechnya’s strongman, Kremlin-backed president Ramzan Kadyrov, has imposed an Islam-tinged rule on the region, including the mandatory wearing of headscarves by women. Kadyrov, himself a former rebel, has been widely accused of rampant human rights abuses including executions and abductions of opponents.

The opposition and others critical of the Russian leadership believe that Nemtsov’s death in a tightly secured area near the Kremlin wouldn’t have been possible without official involvement, and could be an attempt to scare other government foes.

Putin, who had dubbed Nemtsov’s killing a “provocation,” made no comment on the detentions announced Saturday.