In Russian society, homosexuality is still unaccepted. And it makes Russia's gays targets for extortion.

By Veronika Silchenko And Irina Titova, The Associated Press June 5, 2016 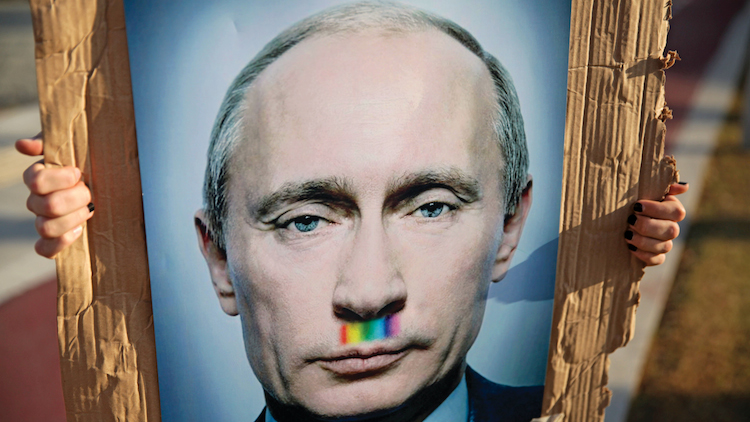 A St. Petersburg economist, one of their latest victims, said several men burst into the apartment where he was meeting his date. Claiming that his date was under age, they threatened to call the police and to release a video they had secretly filmed unless he paid up.

The gay rights group Vykhod, or Coming Out, said they registered 12 such attacks in St. Petersburg in 2015 and at least six more gay men have come to them so far this year. LGBT activists believe the real number is far higher and say the attacks have increased in the past two years.

Since homosexuality finds little acceptance in Russian society, many gays keep their sexual orientation hidden from their families, friends and co-workers. This makes them easy extortion targets for criminals.

Vykhod spokeswoman Nika Yuryeva said most of the recent attacks have followed the same pattern as the one seen by the St. Petersburg economist.

Alexander Loza, a legal adviser at Positive Dialogue, an organization that provides consulting services for gays, particularly those living with the HIV virus, has heard similar stories.

The activists said Russian criminals have been emboldened by a 2013 law that made it a crime to expose children to gay “propaganda,” part of a Kremlin-backed effort to defend traditional family values and counter the influence of what it considers a decadent West.

Alexander Zhelezkin, who manages outreach programs at Positive Dialogue, said the law was what made him decide to become a gay activist.

“Now, my coming out is my defence,” he said.

For prominent television journalist Anton Krasovsky, however, that move ended his career in Russia. He was fired after he came out on the air in 2013 and hasn’t been able to find a job in television since.

Krasovsky said it will be a long time before gays in Russia feel protected enough to speak publicly about their sexual orientation.

The St. Petersburg economist, however, did go to the police. He spoke to The Associated Press on condition of anonymity out of fear that his attackers, who know where he lives, would seek retribution if they learned that he had reported them.

The economist, who gave his age as “about 30,” said he thought they were lying about his date being a minor. But he said the attackers beat and threatened him – and suggested they had friends in the police force who they said would lock him up on fabricated charges.

He said they demanded more than 100,000 rubles ($1,500). One of them took his bank card and cleaned out his account, and they released him only after he agreed to transfer the balance the next day, he said.

The crime gangs who carry out such attacks are not necessarily anti-gay, but have identified a profitable niche where they feel they can operate with impunity, Loza and Yuryeva said.

“They commit these crimes not because they are homophobes – they are simply taking advantage of the situation,” knowing that few people would go to the police after such an experience, he said. “I think they are just common criminals who chose this kind of method.”

St. Petersburg police spokesman Vyacheslav Stepchenko said he had not heard about these blackmail cases and said he wasn’t aware of any anti-gay attacks being registered in the city in recent years.

He offered to check with the specific police station that the economist reported the crime to, but the economist didn’t want to draw public attention to his case by disclosing which station it was.

Timur Bulatov, an anti-gay activist who claims to have helped get a number of teachers fired after outing them as homosexuals, said he sees no need to resort to the blackmail used by criminal gangs.

“Why attack a sick person? Such a person needs treatment,” he said. “I have a bunch of legal methods to use to influence such a person, to put pressure on him.”

Bulatov, who wears camouflage outfits and carries a handgun in a hip holster, said gays are the “enemies” of Russian society and its children, but should be opposed only through legal means.

He said the law banning gay propaganda among minors was intentionally made vague so it can be applied in a wide range of circumstances. The law, for instance, has made it easy to target gay and lesbian teachers in Russia because they work directly with children.

The federal law was modeled on a 2012 St. Petersburg law authored by Vitaly Milonov, a city lawmaker and outspoken opponent of LGBT rights.

“This law is a preventive measure. It was introduced not to punish anyone, but to prevent such public actions as gay parades, because parents in Russia don’t want their children to see these things,” Milonov told the AP.

Milonov, who has a large portrait of the Russian Orthodox Church patriarch on his office wall, said his mission was to promote “normal” families with many children.

“There is no oppression of homosexual people in Russia,” he said. “When gay organizations complain of such harassment, they do it in order to get more money from soft-hearted Europeans.”