The unrest in Ukraine is not a brewing civil war, but the second phase of Russia's invasion. 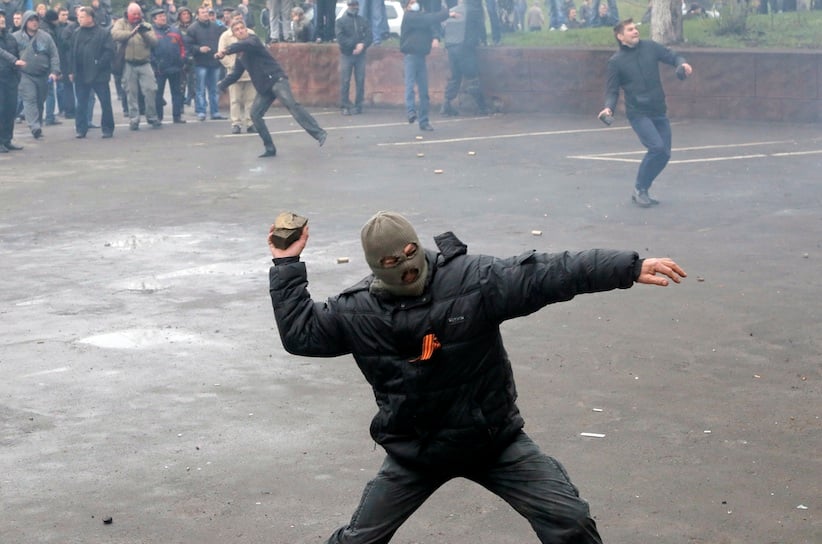 (Efrem Lukatsky/AP Photo) Pro-Russian men throw stones during the mass storming of a police station in Horlivka, eastern Ukraine, Monday, April 14, 2014. Ukraine’s acting President Oleksandr Turchynov on Monday called for the deployment of United Nations peacekeeping troops in the east of the country, where pro-Russian insurgents have occupied buildings in nearly 10 cities.

Russia’s warning that Ukraine hovers on the brink of civil war is a lot like an arsonist’s observation that faulty wiring in a home he’s attacking may lead to fire.

Ukraine does face war; it is arguably in the midst of one already. But this is not— at least not primarily—a civil conflict. Russia invaded the Ukrainian republic of Crimea (and administrative district of Sevastopol) in late February. The second phase of its invasion began this month with coordinated assaults by unidentified men on regional government buildings and police stations across the east.

The move may have some local support but it is not a grassroots uprising. In an age when almost everyone has a cellphone that can record video, the evidence is all over the Internet: the assault troops wear identical uniforms and move with skill and co-operation. They have targeted cities on key transportation routes, should an overt invasion from Russia be necessary. And, in a comic turn, supposedly local insurrectionists in Kharkiv reportedly stormed the opera house, thinking it was the mayor’s office.

The Kremlin’s propaganda arm is also in full swing. Three different television stations in Russia and Russian-occupied Crimea have aired exclusive interviews with men whose stories support the official Russian interpretation that what is taking place is a grassroots uprising against Western-organized neo-Nazis who, in a coup, took power in Kyiv. The interviews are with a German spy who hired 50 European mercenaries to suppress pro-Russian demonstrators in the eastern city of Nikolayev, a peaceful protester who was attacked and shot by neo-Nazis whom the Ukrainian police had brought to Nikolayev, and a surgeon who was helping wounded demonstrators in Nikolayev when those ubiquitous neo-Nazis shot up a makeshift emergency facility and wounded him.

It’s gripping stuff. The problem for Russia is that in their news pantomime the same actor plays the spy, the surgeon, and the bystander. The stories are a clumsy fabrication. But they likely have the desired affect on pro-Russian Ukrainians already pre-disposed to believe the worse about their countrymen who supported the revolution that toppled the pro-Russian Ukrainian president, Viktor Yanukovych, in February.

Indeed, among the most disturbing videos to emerge from Ukraine in recent days is one that shows pro-Russian civilians abusing supposed supporters of the new government in Kyiv. The victims, bloody and barely conscious, are dumped like sacks of meat on the steps of a subway entrance while dozens of onlookers film and insult them. A man with a club strikes one. A middle-aged woman with bleached blond hair kicks another.

Before masses of civilians can treat their fellows this badly, they generally have to believe that the objects of their ire are worse than animals. In eastern Ukraine, it seems that many really do think—despite the absence of any evidence— that they are under attack by fascists. The blood of those beaten in the subway lies as much on the hands of the so-called journalists who have propagated this fiction as it does on the thugs with clubs.

Exactly what Russia is trying to accomplish is unclear. So far what is happening in eastern Ukraine is an almost exact replica of the early days of the Russian invasion of Crimea. But not all invasions are preludes to occupation. Moscow may want to destabilize Ukraine to prevent it from ever joining NATO or the European Union, and to punish it for its anti-Yanukovych revolution. It may wish to force Ukraine to radically devolve power to its regions. Or it may in fact be preparing to occupy the east of the country. The truth is that no one really knows. Russia’s annexation of Crimea—explicitly breaking a treaty it signed only 20 years ago—has radically changed perceptions of what Moscow is willing to do.

On Feb. 26, I was outside the regional parliament in Simferopol, the capital of Crimea. This was hours before Russia’s invasion got under way, and the parliament was still unoccupied. Duelling rallies had been held that afternoon between pro-Russians and pro-Ukrainian Tatars—Turkic Muslims who had been horrendously mistreated by the Soviet Union and were therefore uniformly opposed to any sort of union with Moscow.

After the Tatars left, Sergey Aksynov, deputy of the parliament, came out and addressed the pro-Russian crowd. There was a lot of shouting going on, and my translator had a hard time sorting out what everyone was saying. But from what he could make out, and from what I recall, Aksynov was trying to calm down the more heated members of the crowd and spoke of keeping Ukraine together.

This incident may reveal little more than Aksynov’s opportunism. But I think it also shows how quickly declared loyalties can shift depending on who appears to be most powerful. In much of eastern Ukraine today, those wielding the most power are not loyal to Kyiv.

Crimea offers another obvious but important lesson for what may lie ahead in eastern Ukraine: dictatorship stifles dissent. In Crimea, a little more than half the population is ethnically Russian—not all of whom would rather live in Russia. And yet if we are to believe the referendum results, and judge public mood by the kinds of flags waved at rallies, Russia’s annexation is enthusiastically endorsed by almost everyone who lives there. Of course this is not the case. But Crimea has now joined the Russian dictatorship, and dissent is dangerous. So people stay silent.

In most of eastern Ukraine, the percentage of the population that is ethnically Russian is even lower. A poll in March found that more than half of respondents in eastern Ukraine wanted the country to have equally close ties to Moscow and the West; three quarters wanted Russian troops in Crimea to return to their bases (this was before the region was formally annexed); and only 24 per cent thought that Russian actions in Crimea were justified. This isn’t a region where most people want to join Russia. But when they’re menaced by gun-toting men and lynch mobs, it’s hard to blame them for not saying so out loud.