Survivors haunted by the lessons the world has yet to learn from the slaughter of approximately 800,000 ethnic Tutsis 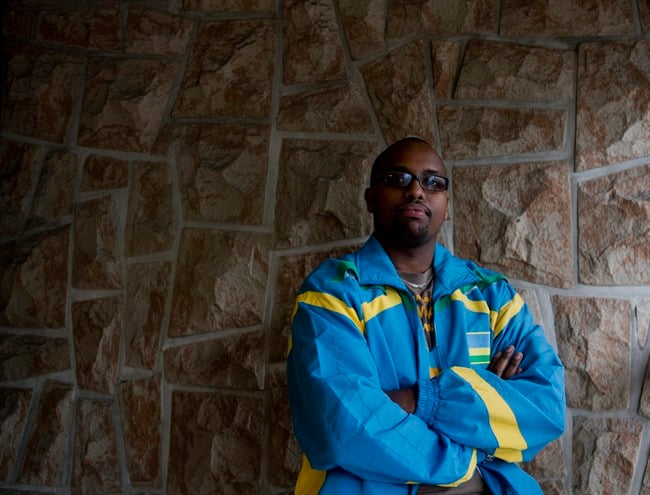 Alain Ntwali poses for a photo in Ottawa on Friday, April 4, 2014. On Monday, the 30-year-old man will join a procession of what’s expected to be 200 others as they march silently through the streets from Parliament Hill to Ottawa City Hall in memory of the 20th anniversary of the Rwanda genocide. (Adrian Wyld/The Canadian Press)

The 10-year-old moved from house to house, two to three times a week, in what would ultimately become a successful attempt to stay one step ahead of the marauding, machete-wielding Hutu militiamen ravaging the Rwandan capital of Kigali.

On Monday, the 30-year-old man will join a procession of what’s expected to be 200 others as they march silently through the streets from Parliament Hill to Ottawa City Hall in memory of the 20th anniversary of the Rwanda genocide.

Ntwali will carry the memories of his deceased parents, and dozens of relatives, who were among the estimated 800,000 ethnic Tutsis killed in the three months of ethnic slaughter. And he will be haunted by the lessons the world has yet to learn from it.

“What’s happening in Syria, it shouldn’t happen at this time, because we’ve had so many examples of war and genocide. It’s so sad to see this happening these days,” said Ntwali, who is now pursuing a university degree in accounting while managing a local convenience store.

“I really don’t understand what’s going on … why this keeps happening. After what happened in Rwanda, that was a big example of what can happen when the UN doesn’t take big action.”

Then, almost apologetically, Ntwali stops, explaining that he has “no big point” to make, even though he just made one.

Dallaire acknowledged the “Responsibility to Protect” doctrine, forged with Canada’s help in the wake of Rwanda and the massacre in Srebenica in 1995, which sought to codify the international community’s obligation to confront gross human rights violations. But drafting doctrine is one thing, said Dallaire; pursuing it is quite another.

“We’ve learned a bunch of lessons, we’ve produced a whole bunch of new concepts, the Responsibility to Protect as being the primary one, but we don’t seem to have the politicians who have the ability to become statesmen and take the risks of applying it,” he said.

“That’s why Syria festers and we go in half, into Libya, and we’ve still got the Congo.”

History has since recognized that Dallaire tried to sound the alarm on the impending genocide, but his warnings fell on deaf ears at UN headquarters.

Since then, Canada and the world has gradually seemed to retreat from the shared responsibility to protect fellow human beings, Dallaire said, citing in particular the sense that the Conservative government wants little to do with the UN.

“What the world should remember is how we abandoned human beings in one part of the world. We just have not established the criteria that all humans count, and not just the ones that meet our self-interest.”

Dallaire’s efforts in Rwanda will be remembered by Monday’s marchers, even though the retired general has been tormented by what he failed to do — stop the slaughter.

In the years that followed, Dallaire suffered post-traumatic stress. He waged a life-and-death battle against his personal demons that he publicly shared — a gesture that helped to lift the stigma associated with mental illness for other Canadian soldiers.

“I think he did the best that he could,” said Ntwali.

He said Dallaire shares the same thing as his fellow Rwandan genocide survivors: the legacy of that feeling of helplessness in the face of dead bodies, literally piling up, before their eyes.

“It’s not an easy thing for him and I hope he will find peace in his heart and he will be able to go forward with all those bad memories.”

Before they were killed, Ntwali remembers his father and mother as thriving business people, happily running a bicycle shop. They died along with 40 to 45 “or even more” extended family — aunts, uncles, cousins. Ntwali’s three brothers and two sisters escaped to start new lives in Rwanda and in Europe.

Ntwali himself came to Canada in 2005 to study at the University of Quebec in Gatineau after graduating high school in Rwanda. He has since married and now has a 22-month-old daughter.