Leader of the free world

By legalizing same-sex marriage, the U.S. is influencing other countries to do the same 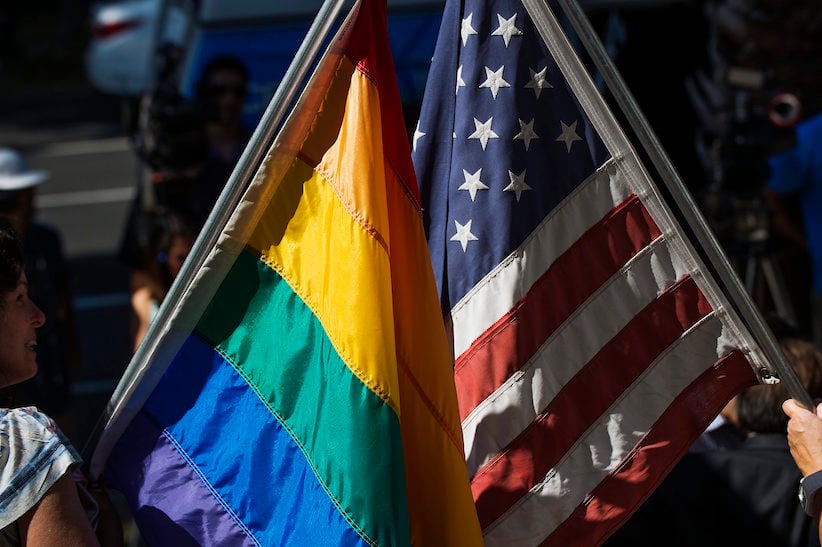 The landmark U.S. Supreme Court ruling in favour of same-sex marriages has no legal force outside the United States, but gay rights activists in many parts of the world believe the court ruling will help their cause.

In the Philippines, in India, in Australia and elsewhere, gay rights advocates think the U.S. ruling may help change attitudes, just as American activists—and judges, educators and legislators—had earlier been influenced by the easy acceptance of same-sex marriage in some European countries, where the laws were changed smoothly without much fuss.

In today’s wired world, political movements cross national boundaries in the blink of an eye, and the trend toward legal acceptance of same-sex marriage is gaining pace, though still rejected outright in some parts of the globe. The U.S. is neither laggard nor leader in this movement, which reflects a fundamental change in public views in many parts of the world, but the ruling of its highest court is expected to have a ripple effect elsewhere.

In the Philippines, activists seeking to win legal recognition for same-sex marriages believe the U.S. ruling will be useful, particularly since the country’s legal setup is largely based on the U.S. system, said Sylvia Estrada Claudio, a gender rights advocate and professor at the University of the Philippines.

“This ruling will have positive repercussions for our own movements here,” she said.

The Philippines’ civil code limits marriage to a union between a man and a woman—but the constitutionality of this proviso is being challenged by a lawyer, Jesus Nicardo Falcis III.

Countries are taking different routes to the same conclusion: the U.S. pathway relied on a Supreme Court ruling to establish that same-sex couples have a constitutional right to marry, while Ireland last month used a popular vote that showed strong public backing, despite the country’s deep Catholic roots.

Influence is a two-way street. Five years ago, Argentina became the first country in Latin America to legalize gay marriage. Activists there said they believe their example helped influence the U.S., and that Friday’s U.S. ruling will in turn shape attitudes and actions in other Latin American countries.

“The U.S. decision will have a big impact in other countries,” said Esteban Paulon, president of the Argentine Federation of Lesbians, Gays, Bisexuals and Transsexuals, adding that his organization contributed documentation to U.S. legal groups arguing the case before the Supreme Court. “Sometimes U.S. influence is negative, but we believe in this case it will be positive and accelerate the process of approving gay marriage in other parts of the world.”

Twenty-one countries now allow same-sex marriage, according to the Pew Research Center, and Mexico permits it in some states, with many other countries offering various legal rights that fall short of marriage to same-sex couples. In most of those countries, well-organized advocacy groups are lobbying for full marriage rights.

These movements, and startup campaigns incubating in other countries as well, may get a real but hard-to-measure boost from the U.S. Supreme Court.

In Australia, where parliament may vote on a same-sex marriage law later this year despite opposition from Prime Minister Tony Abbott, legislators who back the measure said the U.S. ruling leaves Australia alone among developed, English-speaking nations in its refusal to legalize marriages between same sex couples.

Opinion polls show backing for the measure has increased in Australia in the month since Ireland endorsed same-sex marriage. Opposition leader Bill Shorten—capitalizing on the momentum building in other countries—introduced the bill in Parliament just days after Ireland voted.

He said Saturday that Australians should see the U.S. ruling as “a call to action.” Legislator Janet Rice, Greens Party leader, called the U.S. ruling “the loudest call yet for marriage equality in Australia.”

“We must not let that happen here,” van Gend said.

The issue is different in India, where activists believe the U.S. ruling may make Indian judges and legislators feel uncomfortably isolated by the 2013 Indian Supreme Court decision to reinstate a colonial-era law making homosexuality a crime.

The law calls homosexuality an “unnatural offence” punishable by 10 years in jail. In the past, police have used it to harass people and demand bribes from gays.

“In the light of globalization, the (Indian) Supreme Court judgment is being cited as a totally reactionary judgment,” he said. “A judgment that goes against the whole concept of human rights which had been on a progressive upsurge in India.”

At gay pride parades in Dublin, Paris and other cities Saturday, the U.S. ruling was hailed by many as a watershed.

“Soon in all countries we will be able to marry,” said Celine Schlewitz, a 25-year-old nurse taking part in the Paris parade. “Finally a freedom for everyone.”

Led by rainbow banners and drag queens, more than 60,000 people paraded through Dublin at the culmination of a weeklong gay rights festival in the Irish capital. While the mood was already high following Ireland’s referendum last month to legalize gay marriage—becoming the first nation to do so by popular vote—many marchers said the Supreme Court decision provided a bonus reason to celebrate.

“Everybody seems to be gay in Dublin today,” said Sen. David Norris, Ireland’s most prominent gay rights activist. He quipped that Ireland was pleased to see the United States, though the Supreme Court judgment, “start to catch up to us.”

In other countries where gay sex is treated as a crime, beleaguered activists said they took heart from the U.S. ruling even though same-sex marriage is not on the horizon. In most cases, activists seek to decriminalize homosexuality before pressing for marriage rights and other benefits.

In the deeply conservative Arab world, where homosexuality is regarded as a crime in many countries, some clerics warned that the U.S. ruling would lead to the collapse of civilizations.

In Jordan, where homosexuality is not illegal but is considered taboo, one member of the small gay community said the U.S. ruling is “a victory for human rights in general and gives everyone hope.”

He is hopeful same-sex marriage will one day be legal in Jordan.

“In this region, we are going through the dark ages, and when we come out, we will move toward full rights,” he said, speaking on condition of anonymity because he feared the consequences of being identified as gay.

Marriage equality is also not part of the conversation in many parts of Africa, where more than two-thirds of the countries treat homosexuality as a crime.

That is true of Cameroon, which has pursued dozens of prosecutions in recent years under an anti-gay law imposing up to five years in prison for same-sex acts.

Lambert Lamba, a leading Cameroonian activist who has been imprisoned on accusations of violating anti-gay laws, said he was “exulting” in the U.S. ruling.

“It’s a giant step for the fight in the United States,” he said. “And it confirms for me that we can take giant steps in Cameroon as well.”